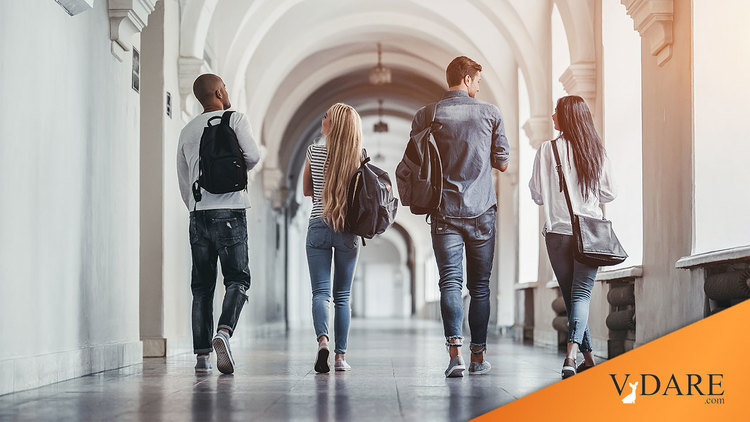 America’s college students are returning to their campuses as you read this. So, as VDARE.com’s Athena Kerry once did, I am writing to inform you of the desperate state academia is in—from the inside. Unfortunately this means that both my name, and the particular college, I attend must stay secret.

Kerry seems to have assumed that because her college was Catholic, it would not suffer greatly from the Cultural Marxism now often found in higher education. My mistake was similar. I assumed that attending a college featured in VDARE.com contributor John Zmirak's otherwise valuable book  All-American Colleges: Top Schools for Conservatives, Old-Fashioned Liberals, and People of Faith would be a place where someone could agree with VDARE.com publicly.

I had followed Zmirak's advice in looking over the college's curriculum and everything seemed right. There were classes on ancient philosophy, the Bible, medieval Christian thought, Shakespeare, etc. Beyond that, there were no required classes on multi-culturalism and there was a place of worship on campus.

The blind spot: I did not have the presence of mind to consider the student body itself. My mistake may seem laughably foolish to some, and perhaps it was, but I cannot emphasize this enough: If you or your children are looking for a college, talk at length with many different students who currently attend. No matter how conservative or traditional the college's curriculum or ethos may seem, a bad student body can ruin it.

Just as a law is useless if it is not enforced, a constitution pointless if not followed, and a culture doomed to death if not respected, a college cannot be much better than its students.

Here are some instructive examples of the mindset that many students now have, even in a place that prides itself in teaching many of the "Great Books":

At this, the class stopped as one student after another explained to me the immense cultural pressures non-Christians in America feel to convert. I was told that although we pride ourselves in being open-minded, we really are not, and that especially during Ronald Reagan's presidency it would have been very dangerous for Muslims in America.

I brought up the fact that, even if their description of America were 100% accurate, it would still make for a better place to worship than a country where "a major task of the police apparatus" was "the persecution of forms of religious practice." [Protest for Religious Rights in the USSR: Characteristics and Consequences, by David Kowalewski, Russian Review, Vol. 39, No. 4 (Oct., 1980), pp. 426-441]. My point was ignored and the discussion moved on.

A few weeks later, the peer who had given me this speech gleefully showed me the post-Obama re-election blog, White People Mourning Romney.

Although a lecture on ethnomasochism (the student in question is White) seemed appropriate, it also seemed futile.

We have not exchanged more than a handful of words since. I might call her treatment of me "ideological discrimination," but what do I know?

Thankfully, this group of students decided such an opinion did not require giving me the cold shoulder. After a brief debate, we settled that we would "agree to disagree" and talk about something else.

I asked my female interlocutor if she could name the five tribes in question—and she could not. I feel that anyone looking to abolish a particular word or phrase should at the very least know its definition, but then again, censorship is not about knowledge but power.

A curious upside to their stance is how amusing the misinformation and hyperbolic extremes can be. One student thought that current Mexican immigration is justified because Andrew Jackson  stole California by illegally launching the Spanish-American War. Did you know there is a website called "Queers Without Borders"?

And, like every other time there is spike in chatter over immigration, I am amazed to find that the people most obsessed with on-demand abortions are the same people who want America to look more like Mexico—a place much less sympathetic to "women's rights" than America. My pro-life stance makes me a chauvinist, but Mexicans seem exempt from such slurs.

However, this round of immigration debates has revealed a brand new stench of hypocrisy. A few months earlier, when Pope Francis was elected, the many students on campus who could not find a nice thing to say about the Catholic Church if their lives depended on it found a way to negatively spin the selection of a Latin American pope. They declared the choice to be a slight of hand. Their logic: Pope Francis was not truly Latin American because of his Italian ancestry—his white background apparently disqualifying him from being Hispanic in any sense perts on Argenine demographics they are not.

Fast-forward a handful of weeks and this logic has been forgotten—now anyone who has ever come to America for any amount of time and for any reason is American—and yes, to say otherwise is” racist.”

I could go on and on with examples, but I don’t want to further depress those shouldering the appalling burden of college tuition.

With all due respect to John Zmirak, I simply want to warn people that vetting the student body is absolutely essential before making the decision to attend. All the assigned Aristotle in the world will not save you if the school is filled with people who want to get jobs with the $PLC.

The author is a Middle American Radical.