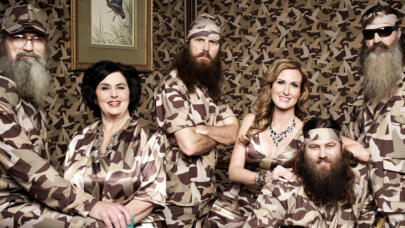 [See also by Boss Aktuba: "Robbin' Hood"—Armed Robbery And Redistribution In The Age Of Obama]

The story to date: Phil Robertson is suspended from A&E’s Duck Dynasty thanks to pressure from GLAAD. Reaction from both fans of the show and conservatives barely familiar with it is huge. A Facebook page supporting Robertson is “Liked” 1.5 million times and numerous Republicans—even a few from Conservatism Inc.—condemn A&E.  The network capitulates before even a single episode is impacted. The only recent comparison: the backlash against efforts to boycott Chick-fil-A for statements made by its Chief Operating Officer in defense of traditional marriage in mid-2012.

(Note that both the Robertson and Chick-fil-A controversies ended with a partial concession by the insufficiently tolerant party. Robertson made it clear that he “would never treat anyone with disrespect just because they are different,” while Chick-fil-A vowed to keep their vile opinions to themselves. [Chick-Fil-A Agrees To Cease Funding To Anti-Gay Organizations, Chicago LGBT Group Claims. Social Reading. Huffington Post. Retrieved September 19, 2012.]But neither went back on what they said. Robertson is reinstated and Chick-fil-A is still selling chicken sandwiches across the country. Contrast this with the fate of grovelers like Paula Deen, Michael Richards, or that white kid who played intramural soccer at Oberlin.)

The Duck dust-up is widely understood to be a sign of the escalating culture war between Coastal Elites and Regular Americans. The Coastal Elites despise the Regular Americans as closed-minded, bigoted, religious, old-fashioned rednecks, holding America back from what they view as her true destiny: stylish global popularity-contest-winner. Regular Americans, meanwhile, grow weary of having an ever-heightening stack of Political Correctness and “tolerance” policies—written and unwritten—shoved down their throats. And they correctly sense they are seeing their country taken from under them and changed for the worse.

But there are plausible arguments that the whole Duck Dynasty drama was staged (Manufacturing Outrage, by Guy Somerset, TakiMag, December 24 2013) and that the premise of the show itself might be a fake (See Duck Dynasty is a Fake Yuppies-in-Red-Neck-Drag Con Job, Salo Forum, December 22, 2013,  or have a look at pictures of the Robertsons without beards).

It wouldn’t be the first case of “yuppies in redneck drag.” Ever heard of Larry the Cable Guy? How about George W. Bush? In these examples, the persona has won out over the biographical reality.

Thanks in large part to comments made by the Robertsons themselves, many believe that the original intent of Duck Dynasty was to make fun of rednecks and their backward ways, and that through their own on-camera behavior and confronting the show’s producers the Robertsons were able to take back some control of the way they were depicted. [Duck Dynasty: The Show That Got Away by Pat Archbold, National Catholic Register, December 19, 2013]

To me, this claim seems implausible. Reality TV is highly scripted and heavily edited, with creative power held almost exclusively by the production executives. When I worked as a gaffer on a reality show pilot, I saw whole scenes get meticulously staged with multiple takes, and I watched the director and producer feed lines directly to the cast members word for word. “Reality” indeed.

Besides, reality talent who refuse to cooperate with the creatives behind the scenes have their performances pared away in the editing room, even their characters eliminated during the preproduction casting process. I think the backstory about the Robertsons triumphantly undermining the denigrating intentions of the show’s creators is a carefully vetted part of the show’s oeuvre.

And it all appears to be working: viewership and merchandise sales for Duck Dynasty are way up, even from their record-breaking pre-controversy numbers. Liberal elites tune in to see the freak show of Neanderthals who still believe in Jesus; educated, leader-starved conservatives are suddenly interested in the poster boy potential of the Robertson clan; the People of WalMart—the white ones anyway—believe that, by buying more Duck Dynasty merchandise, they are fighting the good fight. It doesn’t occur to them that A&E is likely the prime benefactor of their consumerism.

And of course for the so-called “news” media—both mainstream and alternative—the controversy is an ample and lucrative source of content.

But is this all just a conspiracy theory? Could, and would, a small group of marketers, retailers, and Hollywood producers successfully coordinate to dupe and manipulate so broad a swath of the American public?

To me, it seems more than just possible.

But it doesn’t matter anyway. The possibility of a manufactured controversy negates neither the existence of the plainly observable culture war, nor the hopeful sign that conservatives see in the backlash against Robertson’s suspension and in his eventual reinstatement.

A movement may be spurred to action by a falsity. But the movement’s impetus is no less real, and its aim no less true. And while A&E make out like bandits from the controversy, the more general category of “liberal policy and opinion leaders” may find themselves unable to get away with as much next time.

That the Duck Dynasty controversy was a rallying point for Regular Americans is a hard thing to deny no matter what your stance.

Moreover, it suggests that, as far as the culture war is concerned, both GLAAD and the Hollywood elites behind the show are, in fact, not in it for the long haul. They are more like arms traders than a potent Axis of Evil. They’d rather make a quick buck now, even if it means rousing their enemy to full stature.

And why shouldn’t they? Aren’t bodies like GLAAD and the Southern Poverty Law Center ($PLC to VDARE.com) more like zero-sum competitors than allies? Are they not two parasites on the same (rich liberal loony) host?

Organizations like these survive, not by doing actual good deeds for members of the groups they are purported to represent, but by arriving to the scene of some transgression and leveraging it—or draining it directly—for resources. When the transgressor caves, or when his pockets are turned out, the hard times kick in again as the scavengers must go off in search of the next feeding frenzy.

And who knows if they will make out as well next time? GLAAD, for example, relies upon controversies related to homophobia—they get nothing out of a Trayvon Martin shooting, from which an Al Sharpton grows fat instead. So each parasite tries to cash in immediately as best it can while the going’s good.

If all the Left’s fractured forces act like this then it is just a matter of keeping vultures at bay—meaning this is a culture war Regular Americans have strong chances of winning.

Boss Aktuba [Email him] once hid his identity because he worked in the Hollywood film industry. Now he's moved back to the Midwest and works in software development, and continues to use the obviously fake name “Boss Aktuba” because he just wants to keep his family safe in spite of his mainstream—but, to elites, radical—views. He writes in whatever spare time he can find.