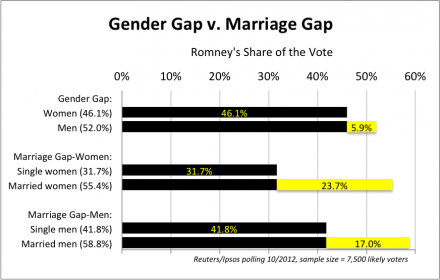 Gender Gap vs. Marriage Gap—Or, The Obama Fringe vs. Romney's (And America's) Core

brings up 17,900 current news stories about this massive problem for Republicans.

On the other hand, enter into Google News

and you’ll get a half dozen hits.

Barack Obama will win in a landslide among singles (i.e., never married, cohabitating, divorced, or separated). In contrast, Mitt Romney will cruise to victory among the married / widowed. (The widowed tend Republican, although not as much as the married do. I’m grouping the widowed in with the married in this analysis because widowhood is a natural outcome of marriage.)

There are several reasons why the Marriage Gap is so little discussed—some technical, some profound.

In the past, it’s been hard to check under the hood of polling data. The right to crosstab data the way you want to see it has typically been restricted to paying customers. Campaign professionals, such as Clinton pollster Stanley Greenberg, have long been dissecting the data to advise their clients on the centrality of the Marriage Gap. But that’s too much work for the MSM.

Fortunately, Reuters now offers a free site that allows crosstabbing. In conjunction with Ipsos, Reuters has been running an Obama v. Romney poll all year, with a healthy sample size of 11,000 respondents per month.

To convert the Reuters graphs into useful answers to important questions requires a fair amount of number-crunching, so I’ve built a spreadsheet to do this. The two charts in this article come from my analysis of Reuters-Ipsos online polling for the first three and a half weeks of October.

For what it’s worth, Reuters-Ipsos showed Obama enjoying a thin lead during the first three weeks of October, Romney then eked out a microscopic 50.2 to 49.8 lead in the current, incomplete fourth week. Overall in October, Obama led Romney 51-49 among likely voters.

(By the way, Obama is preferred 69-31 among the sizable number of people who told Reuters that they are unlikely to actually vote, presumably because they are felons, foreigners, or just not into that whole civic responsibility scene. The Gender Gap is particularly large among nonvoters. But…nonvoters don’t vote.)

My analysis won’t tell you who will win the election. Yet it will tell you with a fair degree of accuracy, well before the exit polls are in, who is going to vote for whom.

To present the demographic splits as simply as possible, I will leave out all respondents who told Reuters they were undecided, unlikely to vote, or will vote for a third party. That leaves a sample size of exactly 7,500 likely voters who have chosen between Obama and Romney.

The expedient of leaving out all the miscellaneous responses declutters the data. It means that the two candidates’ percentages must add up to 100 percent. The fellow with over 50% is, by definition, the favorite of that demographic niche. My graphs, therefore, just tell you Romney’s share of each demographic group and ignore Obama’s. If you want to know what Obama’s percentage is, just subtract Romney’s from 100.

Thus, the Gender Gap is, as I calculate it, six percentage points: Among likely voters, 52 percent of men and 46 percent of women favored Romney.

That’s the simplest way to present the magnitude of that gap. But many journalists like to double the size of the Gender Gap by double-counting: Obama leads among women 54-46, so that’s eight points, and Romney leads among men 52-48 so that’s four points; add eight and four together and you get a Gender Gap of 12 points! That sounds a lot more important than 52 minus 46 equals six. But it’s actually the same thing, just presented more confusingly.

That Gender Gap of six points must be put in perspective, though. Note that Romney was favored by slightly over 57 percent of the married likely voters, versus less than 37 percent of the unmarried.

That’s a Marriage Gap (expressed my way) of 20 points. In other words, the gap in favoring Romney between the married and unmarried is well over three times larger than the much-touted Gender Gap. In the graph above, the yellow portions of the bars represent the Gender and Marriage Gaps. Note that the Marriage Gap is immense among women, approaching 24 percentage points. Married women are 75 percent more likely than single women to vote for Romney.

Among men, the Marriage Gap is 17 points: 59% of married men favor Romney versus only 42% of single.

In small part, the Marriage Gap is an artifact of other well-known electoral gaps. For instance, singles are disproportionately black. Blacks don’t marry much, with 72 percent of their babies born out of wedlock, and blacks, single or married, overwhelmingly support Obama.

Still, the Marriage Gap is almost as large just among whites as among the general electorate, with 65 percent of married whites favoring Romney versus only 47 percent of single whites.

Nor is the Marriage Gap just a by-product of partisan differences by age. The Marriage Gap among the key 30-something cohort of whites, for example, is about 17 points.

The Marriage Gap shows up among nearly every conceivable subgroup: Catholics, Mormons, Jews etc. For example, Romney has 39 percent of the support of married Jewish men. That’s not good, but it’s not terrible either. He attracts 33 percent of both Jewish women and single Jewish men, but he’s getting blasted among single Jewish women (21.5 percent).

However, in contrast the Marriage Gap doesn’t drive black voting, at least in 2012. Romney is drawing only three percent of married blacks versus five percent of single African-Americans.

My view: Blacks tend to see voting for Obama as a sign of racial self-respect. Hence, Obama appeals to almost all elements of the black community—including, for example, former Secretary of State Colin Powell, who has just endorsed Obama again. Powell’s colleague from the elder Bush’s White House, John Sununu, got himself in the usual trouble for pointing out that Powell’s endorsement was motivated by feelings of racial pride. But in fact these feelings are perfectly understandable.

Among Hispanics, the Marriage Gap is comparable to that among whites. But Latino voters are shifted well to the left overall. Thus 42 percent of married Hispanics favor Romney versus 30 percent of single Hispanics. That ratio (but not the absolute level) is quite similar to the 65 – 47 Marriage Gap seen among whites.

This is another piece of evidence suggesting that Hispanics are not an inherently oppositional group in the celebrated manner of blacks. Despite the diligent efforts of the MSM to radically racialize Hispanics over the immigration issue, they just don’t have a strong collective electoral identity the way African-Americans do. Latino voting patterns tend to follow white patterns, just offset to the left. The black vote, if anything, moves in opposition to the white vote.

Thus the national MSM predicted doom for the GOP in the 2010 House election because Republicans appeared finally to have turned decisively against amnesty for illegal immigrants. Yet GOP candidates drew 38 percent of Hispanic votes—an above average amount. Why? Because whites trended Republican in 2010, and Latinos, especially the sober citizen types who bother to vote in off-year elections, listen to whites more than to blacks.

What does motivate Latino voters are their individual and family characteristics. However—and unfortunately for Republican candidates—those personal factors incline most Hispanics to vote Democratic, for perfectly rational reasons quite independent of immigration policy.

For instance, one reason why Hispanics are so Democratic is that they have lower rates of being married. The illegitimacy rate among Hispanics is over 53 percent. And it’s higher among American-born than foreign-born Latinos. The conventional wisdom that Latinos are sure to convert to Republicanism if only the GOP will invite millions more immigrants more looks pretty dubious.

The American chattering class dreams up fantasies about Hispanic family values. But the depressing reality is that the Latin Americans who sneak into the U.S. typically are from way down the social scale in their own countries—and they and their descendants stay pretty far down in the U.S. As Charles Murray documented in Coming Apart, downscale people tend to be victims to their passions and lack of future orientation, which causes family chaos—especially, for reasons that bear examination, in the late 20th century. Bringing in millions of lower class foreigners just leads to a larger fraction of “random families” in need of social workers and other government-employed minders.

The good news, at least for Republicans (and America): the Marriage Gap is somewhat more amenable than the Gender Gap to government policy.

The ratio of males to females is determined largely by nature (and by the Gender Gap in smoking a few decades ago). But whether Americans get married or not is largely determined by how affordable they find family formation. And, as Benjamin Franklin pointed out in 1751, immigration restriction is one obvious way to make marriage more affordable.

Obama campaigned as a purported uniter in 2008. But he’s running an extremely divisive campaign in 2012—emphasizing strange, symbolic micro issues of interest to only tiny numbers of voters: gays in the military; gay marriage; his mini Administrative Amnesty etc.

And that leads to a broader conclusion: Obama's support lies in the fringes of American society, while Romney's is found in the core. (Peter Brimelow has called this polarization Anti-America vs. America.)

(And a category called "other orientations" for people who apparently consider the sexual orientation choices “straight,” “gay,” or “bisexual” too confining. I don’t even know what “other orientations” means. Please don’t write in to explain it: I don’t want to know.) 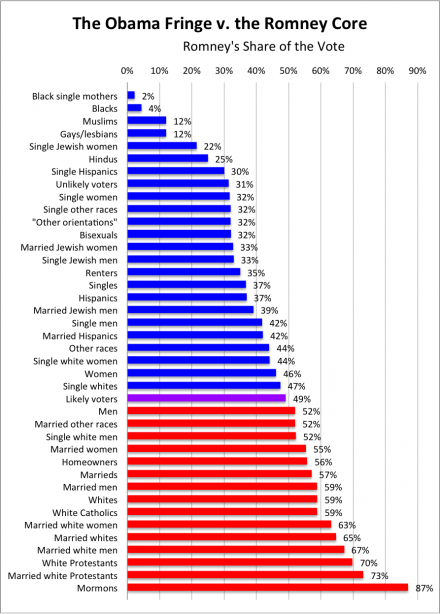 Obama’s is an absurd coalition. It can be motivated only by exacerbating the bitterness of its members toward people fortunate enough to be closer to the heart of America. The correlation between being an Obama supporter and personal unhappiness, alienation, or dysfunction is not coincidental. The iconic Obama supporter is the black single mother.

Or another example: single Jewish women tend to have a lot of issues, such as: Why am I still single? This often leads to resentment of Jewish married men and their non-Jewish wives. But you’re not supposed to write about that. It’s too embarrassing. So much of single Jewish women’s anger gets channeled into more socially acceptable MSM denunciations of Angry White Men and their War on Women that allegedly causes the Gender Gap.

The plan fact is that the core of Romney's support is the core of the nation: the kind of people who built America into the world's leading country and who still keep it running.

And that ought to be obvious to everybody.

That it’s not is a largely a testimony to the debate-shaping power of America’s Main Stream Media, heavily dominated by the Fringe—and another example of the intellectual calcification I cited at the beginning of this article.

Steve Sailer (email him) is movie critic for The American Conservative and writes regularly for Takimag. His websitewww.iSteve.blogspot.com features his daily blog. His book, AMERICA’S HALF-BLOOD PRINCE: BARACK OBAMA’S "STORY OF RACE AND INHERITANCE", is available here and here (Kindle)