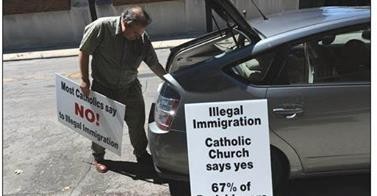 From Under The Rubble | Catholic Bishops On Immigration—Here We Go Again!

Christopher Manion
A+
|
a-

According to the New York Times, America's Catholic bishops are counting on the persuasive power of the pulpit this month to push "comprehensive immigration reform"—also known as amnesty for illegal aliens.

Unfortunately, we've already seen this movie, and it has an unhappy ending. Back in January 2010, our beloved shepherds launched a similar campaign supporting another amnesty bill.

Bishop John C. Wester chaired the Committee on Migration of the bishops' conference (USCCB) at the time. He told the Catholic News Service that "the church will prod lawmakers take action on the issue, beginning with a postcard campaign to members of Congress and prayer vigils across the country." [CNS,  January 8, 2010].

Hey, wait a minute. Wasn't something else going on in January 2010?

Oh, that's right—Obamacare! But Obamacare wasn't a problem. After all, it never would have gotten off the ground, had the bishops not supported "universal health care" as "a basic human right" for years.

So the confident bishops focused on amnesty, announcing a nationwide "Justice for Immigrants" campaign in January 2010. They planned to distribute millions of postcards to parishes throughout the country urging Catholics to demand that Congress "enact immigration reform as soon as possible."

They had good cause. The Nobel Peace Prize winner with an honorary degree from Notre Dame—whose election so many of them had supported in 2008—had lied to them.

It's shocking, I know. Simply shocking.

Then the most pro-abortion president in history betrayed them again, directing HHS to issue its notorious "Contraceptive Mandate." And today, dozens of bishops, Catholic universities, businesses, and individuals—among them Notre Dame—find themselves suing Obama, whose "universal health care" regulations threaten to force thousands of Catholic institutions nationwide to close.

The Experts Flunk Out

"We want to try to pull out all the stops," says Kevin Appleby, [Email him] the director of migration policy at the bishops' conference.

But, to paraphrase Samuel Huntington, "Who Are We?"

Richard Doerflinger, [Email him] Appleby's colleague on the USCCB staff, answered that question in 2010. He said that "one organization in particular [the USCCB] has the role of speaking for the moral voice of the Church on these matters and also have [sic] the policy expertise of figuring out when legislation is acceptable to the Church's interests and our convictions…."

"We're not just an interest group that has an opinion," he continued. "We've actually researched the facts…. That's something that no other Catholic group can do in the depth that we've done it."

On the face of it, this bluster blends in with the arrogant noise that echoes among the thousands of "experts" who populate Washington's bureaucracies.

The USCCB is, alas, "just another interest group," but Doerflinger has a point. It's different in one critical aspect: the laughable notion that no one else in America can do competent research reflects not just hubris—it represents a form of errant elitism unique to the Church that has been practiced, and condemned, for centuries.

Isn't This Supposed to be the "Age of the Laity"?

"I want to get rid of clericalism."

Like the layman, the bishop has the right to hold private political opinions regarding issues on which good Catholics (and bishops) can disagree. The problem arises when the bishop attempts to elevate his personal agenda to the level of authoritative Church teaching. This constitutes an abuse of the prelate's authority and confuses not only the faithful, but the public as well.

Such theological errors have real-world consequences. Clericalism has diluted the genuine authority of the American Church to the point where most bishops are afraid to exercise it—as though they had lost the authority to teach anything at all.

Witness the Church's trying to oppose homosexual "marriage" or the Contraceptive Mandate without being able to address homosexuality or contraception on moral grounds.

USCCB President Timothy Cardinal Dolan is right—the bishops have had "laryngitis" regarding the magisterial teachings of the Church on sexual morality for fifty years. But they've filled the vacuum with the political agenda of the welfare state, and have used their "role of speaking for the moral voice of the Church" to pass off their opinions as official Catholic teaching instead.

As a result, America's bishops have inverted the Church's priorities. Eternal truths are ignored, while personal political agendas are canonized. They have become "just another NGO," lobbying on issues ranging from inflation, welfare, taxes, and budgets to the price of tomatoes in Florida.

Amnesty for illegal aliens fits right in with a clerical agenda that has become increasingly partisan, radical, and secular.

It is especially distressing to see politicized bishops cloak their agenda in religious language, as though no good Catholic—or good person!—could possibly disagree.

Catholics in my diocese are asking their pastors, in and out of the Confessional, "Is it a sin to oppose amnesty?"

Countless bishops would apparently like them to think so. Roger Cardinal Mahony once told an immigration rally that supporters of current law were "fanning the flames of intolerance, xenophobia and, at times, bigotry."

Curiously, the Rubble can find no record of Mahony or his successor, Los Angeles Archbishop José Gomez—or any other bishop or USCCB official, for that matter—condemning the blatant racism of La Raza—"The Race"—or that of many other pro-amnesty agitators who march alongside them in amnesty rallies.

Instead, the Cardinal implies that everyone who disagrees with him is irrational.

Such self-serving moral posturing is hardly pastoral. It ill serves—and even perverts—the Church's mission to "go and teach all nations"; it misinforms the public, scandalizes good Catholics; and is thoroughly lacking in charity.

It is also often lacking in truth. Good bishops and priests consistently refer to the Catholic Catechism's teaching that prosperous nations should strive to "welcome the foreigner" [CCC 2241]; however, they rarely mention what follows: "Immigrants are obliged to respect with gratitude the material and spiritual heritage of the country that receives them, to obey its laws and to assist in carrying civic burdens."

The Church's amnesty advocates routinely criticize businesses for exploiting the immigrant; they rarely mention that lobbyists for those same businesses are swarming Capitol Hill, supporting amnesty because they want cheap labor.

The Church's amnesty advocates often bemoan the sins of amnesty opponents. But how many of them teach the immigrant that falsifying Social Security documentation is a federal felony as well as a violation of the 7th and 8th Commandments? That the same goes for "working the system" illegally to max out on education, medical, and food programs (among dozens of other welfare programs)?

This refreshing approach would honor immigrants as fellow human beings, and not as mere incompetent wards of the Church or the State. It would affirm the immigrants' dignity, their worth, and their ability to be fully human. It would constitute an act of charity and justice, as well as simple common sense.

Towards A More Positive Pastoral Plan

Clericalism is condemned by the Church because it is an error in theory and a disaster in practice. In 2010, amnesty distracted the bishops and their "experts" until it was too late. Today, it distracts them from teaching the fundamental truths of Humanae Vitae regarding marriage and morality that our drowning culture is literally dying to hear.

The Vatican II document Lumen Gentium makes it clear that the layman, not the cleric, is responsible for the particulars of legislation.

Which brings up an important point. The bishops' clericalism would be just as egregious if they opposed amnesty and deficit spending and supported tax cuts for the rich.

Practical politics is the laity's responsibility. The responsible layman should just tell the bishops, "Please, do not endorse my legislation: politics divides us. Tell us the truths that unite us."

As Cardinal Dolan points out, since the bishops went silent on fundamental morality half a century ago, some thirty million Catholics have left the Church. Pope Francis wants us to reach out to bring them back. It's a slam dunk that preaching politics isn't going to do it—but preaching Christ crucified just might.

Christopher Manion, Ph.D.,  [send him mail] is Director of the Campaign for Humanae Vitae, a project of the Bellarmine Forum. He served as a staff director on the Senate Foreign Relations Committee for many years. He has taught in the departments of politics, religion, and international relations at Boston University, the Catholic University of America, and Christendom College.

This column is sponsored by the Bellarmine Forum, and distributed by Griffin Internet Syndicate and FGF Books.

Copyright © 2013 by Christopher Manion. This column is distributed by www.fgfBooks.com.