Now that Timothy Dolan has been promoted by the Vatican to Cardinal, he has become more welcome on big media. There is a meme going around that the press-savvy New York cleric could become the first American Pope, which makes him something of a hot property as religious figures go.

One of his favorite topics is a mass amnesty for millions of foreign lawbreakers, many of whom are Hispanic Catholics, curiously enough. Since one-third of Americans raised in the church no longer describe themselves as Catholic (according to Pew research) the cassock brigade is keen to fill the abandoned churches. Hispanics comprised 32 percent of all U.S. Catholics in 2008, up from 20 percent in 1990. Immigration-fueled demographic change has been very helpful to the Catholic church.

In standing up for his organization, Cardinal Dolan accuses Republican border defenders of being very tough, splitting up families and displaying general meanness against lawbreakers. In earlier remarks, he compared Arizona friends of sovereignty to nativists and Know-Nothings of another century.

Interestingly, Dolan has noticed that pro-enforcement candidates get the cheers on the campaign trail. The reason is that citizens want their borders and jobs protected from foreign predation.

The most hurtful attack on America of Dolan and his powerful bishop cronies is their active support of open borders and an unlimited firehose of Hispanic workers from south of the border. Catholic teaching approves of poor people crossing borders against the law, and tells them it is their right to do so when the reason is economic gain.

America doesnt have enough jobs for citizens already here. Four years of a terrible jobs depression has left a real unemployment rate of 14.5 percent, the U-6 number that includes the underemployed and discouraged job-search dropouts. Millions suffer economically in terms of lost jobs and foreclosed homes, yet the Catholic church wants more excess foreign workers. Catholic Charities also gets millions of dollars from the government to help immigrants.

Furthermore, it is an odd sort of Christianity that sees fit to take employment from hard-working citizens and redistribute it to lawbreaking foreigners. That idea is more Marx than Jesus.

And the bishops recently recommended that people disobey laws that run counter to Catholic teachings.

Below, a Hispanic protested Arizonas immigration enforcement law in front of the Supreme Court while holding a Mexican religious symbol. 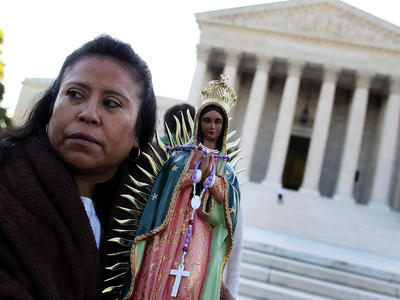 Of course, erasure of borders and sovereignty is the goal of Catholic elites, not of citizen parishioners. A 2009 Zogby poll showed 64 percent of parishioners preferred immigration enforcement rather than the mass amnesty pursued by Catholic leaders.

CJ: The New York cardinal being touted as having a shot at being the first American pope, Timothy Dolan, is taking aim at republicans over immigration policy this morning. never shy about wading into controversial political waters like the contraception debate, he has a warning for republicans. i spoke with the charismatic cardinal and asked him about the upcoming supreme court decision on immigration.

TD: Catholics feel catholic bishops feel very strongly about that immigration needs reform. Were just upset where the loudest cheers in the campaign trail for whatever candidate can say the most punitive or the most angry things about immigrants. The catholic church is we call our mother church, and shes traditionally welcomed the immigrant. we are a church of immigrants, so were particularly sensitive to the rights of immigrants.

CJ: But the republicans, you think, have gone too far on the immigration

TD: I would say if any republican asked my opinion, id say you need to get your house together when it comes to immigration because right now, fairly or not, you have the reputation of being very tough on immigrants. If a republican answered me, id say you better come up with a much saner, more civil, more just immigration policy . But, boy, when you have a policy that splits up families, when you have a policy that drives people underground, when you have a policy where now the government, whether it be in Arizona or in Alabama, is asking our soup kitchens to ask for documentation before they give people food or housing or clothing or medical care, thats not right. thats not catholic. Thats not christian. Thats not religious. And its not American. The bishops are pretty adamant on that.