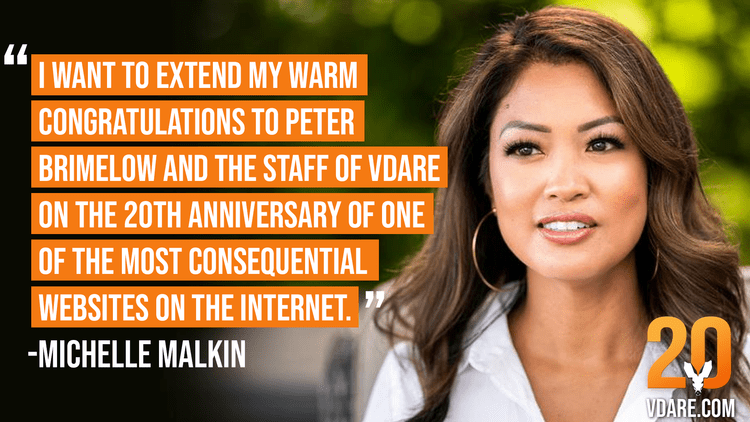 EXCLUSIVE! Michelle Malkin: VDARE.com Is “One Of The Most Consequential Websites On The Internet”

This year end, VDARE.com celebrates 20 years of America First journalism, focused on patriotic immigration reform and American national identity. We are proud to have been the voice of the Historic American Nation for these past two decades and, thanks to your support, we will continue to amplify that message for many decades to come. VDARE.com informs the fight to keep America American. We push back against the tyranny of Open Borders and the Left’s drive to Elect A New People.

And we’ve only just gotten started. But now we need a little help from our friends to cross the finish line.

Speaking of friends, we are honored to receive a message of hope from one of the true heroines of 2019: America First champion Michelle Malkin. Michelle famously kicked off the year by delivering a barn-burner of a speech on the CPAC stage, attacking the gatekeepers of Conservatism, Inc. and vowing to defend and protect those Conservatism Inc. has purged and vilified.

And she has stayed true to her word. More recently, Michelle’s explicit defense of the young Groypers and her refusal to apologize or disavow patriots deemed dangerous by cuckservatives servile to the donor class resulted in the severing of her relationship with Young America’s Foundation (YAF).

Michelle, like VDARE.com, has only begun to fight, and we are strengthened by heavy hitters like Michelle on our side.

You can watch Michelle Malkin’s celebration of VDARE20 at our YouTube channel here.

In it, Michelle says:

“Merry Christmas. I want to extend my warm congratulations to Peter Brimelow and the staff of VDARE.com on the 20th anniversary of one of the most consequential websites on the Internet.

I first started reading Peter Brimelow’s reporting in Forbes while a cub editorial writer in Los Angeles in the mid-1990s. Peter’s thorough investigative journalism in both The Worm in the Apple and Alien Nation greatly influenced my own work. I remember well the backlash to Alien Nation from the usual Open Borders suspects, especially the anti-American Wall Street Journal. De-personing and disavowing may be new to the Generation Z nationalists who’ve taken up the cause. But Peter and VDARE.com have been battling the Cancel Cult and gatekeepers for two decades.

For fun, I scrolled through the 1,100-plus posts listed in my author archive on VDARE.com and found the first three: a link to my syndicated column in February 2002 on religious worker visa fraud in mosques, a column on the INS whistleblowers who exposed the Catch And Release policies that allowed illegal alien and D.C. sniper Lee Malvo to remain the country, and a column on the media whitewash of the black-on-white Wichita Kansas massacre in the fall of 2002. When I launched my own eponymous blog in 2004, VDARE.com was on my original blogroll must-read links and remained there to the chagrin of the SPLC and Conservatism Inc. There are too many indispensable contributors to mention, but I’ve been a longtime fan of Brenda Walker, Juan Mann, Joe Guzzardi, Allan Wall, James Kirkpatrick, John Derbyshire, Federale, and Washington Watcher. I rely on the site to get unparalleled news, commentary, on the ground reports, data, and insider scoops all focused on the National Question that no one else dares publish.

I will be forever indebted to Peter for his generous review of Invasion and friendship over the years. We tag-teamed for a memorable debate against Frank Sharry and his ilk in New York City at some hoity-toity donor-class event in 2002. 17 years later, Peter and Lydia were with me to unwind after my CPAC speech calling out Conservatism Inc. to its bloated, traitorous face – two decades in the making. Thank you, Peter, for your patience and good cheer throughout.

VDARE.com is more important than ever as it turns 20 because a vigorous new generation of twentysomethings is rising in revolt against Conservatism Inc and Open Borders Inc. Your impact can be seen as young nationalists echo exactly the principles that undergird VDARE.com: America is a real homeland, not just a credal proposition. Demography is destiny. And, of course, diversity is not our strength. America’s historic and cultural identity matter.

With Silicon Valley and the Swamp uniting to purge their hallowed platforms and stages of patriotic dissidents, VDARE’s survival as a central clearinghouse for the Old Guard and for newcomers is paramount. To readers old and new, thank you for your independence, curiosity, and support. May the next 20 years of VDARE be as fruitful as the last.”

Donate now to fund America First journalism into the future!