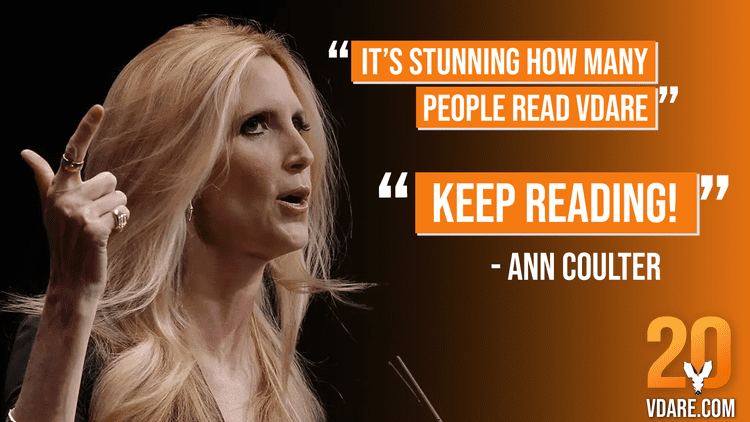 EXCLUSIVE Ann Coulter: "It's Stunning How Many People Read VDARE.Com!"

For twenty years, VDARE.com, our writers, editors—and even our readers—have experienced censorship, deplatforming and vilification simply for our positions pushing back against Open Borders and pushing forward for the Historic American Nation. Patriots face this kind of pressure because the Left is absolutely terrified that if anyone hears our arguments against mass immigration, they will agree with us. They know the only way to keep us down is to silence us and attempt to scare away anyone who might be curious enough to seek us out.

Our response to this is two-fold. First, we’re suing the jerks! And second, we push forward, knowing that our readers and supporters represent the Historic American Nation in all walks of life. We inform the fight to keep America American. Whether it be in the living rooms of working class voters around the country, or the intellectual pow-wows of patriotic influencers, we’re there.

Possibly our most influential reader just happens to have played a key role in President Donald Trump’s run for the White House in 2016—the incomparable Ann Coulter.

No one has had a bigger impact on politics in America than Ms. Coulter. Writer of 11 bestselling books including the fantastic Adios America, Ann has been a one-issue voter against immigration since 2013 and we are proud to carry her column (with our trademark, reinforcing hyperlinks).

And guess what? Like you, she has long been a reader of VDARE.com, and understands the pivotal role we play in America First journalism.

On the subject of VDARE.com’s 20th Anniversary, Ann had this to say:

“I don’t remember the first time I saw VDARE.com, but I know I had to stop reading it when I was writing Adios, America, so that I wouldn’t just be ripping off VDARE.com!

“So it was kind of painful for like a year and a half—I could not go to VDARE.com, and I’m slowly getting back in the habit. It doesn’t matter, you can be socialist, communist, feminist, environmentalist, if you are a patriot on immigration, VDARE.com will have you!

“20 Years for VDARE.com, that’s how long we’ve been losing. That is so depressing. VDARE should have been a website that’s created and Americans read it and ‘Oh my gosh, we’ve got to save our country. Let’s have an immigration moratorium!’

“Alas, that has not happened.

“Oh, that’s right, because we have a lot of plutocrats who want their cheap labor and don’t care about the country. And that’s why VDARE.com will apparently be publishing until the end of all of our lives.

“VDARE.com has been saying a lot of this stuff for a long time and woke a lot of people up and it’s stunning how many people read VDARE.com. It was a completely respectable site until Trump got elected, suddenly this completely legitimate website, that writes about nothing but immigration, 'it’s white nationalist!'

“Why? Because it supports Trump. Because it is dangerous to give people correct information. And as the great Peter Brimelow has said, 'the definition of a racist is a conservative winning an argument with a liberal.'

When asked what advice she has for members of the Dissident Right, Ann said:

"You must embrace being called names. Just realize it’s like a two-year-old throwing a tantrum. They don’t have a real argument. The world has gone mad; we are not mad. You’re right. Keep reading!"

While the Left provides endless amounts of treasonous activity for VDARE.com to report and analyze, they are far from our only enemies. VDARE.com’s coverage of the GOP Establishment, focusing on blunders like Invade-The World, Invite-The-World policies, tax cuts for the rich, and the habit of surrender on social issues, has set us apart from GOP boosters from the beginning. The now-common moniker “Conservatism, Inc.” was first posted on VDARE.com in 2009. This year, VDARE.com’s James Kirkpatrick released his first book with the same name.

2020 is a crucial time for patriots to wise up and see the reality of the grifter Political Class for what it is—and VDARE.com will be right there with all the information they need.

Next year, America will face a momentous choice. The future of the White House, the Supreme Court, the border wall, and many other issues are up in the air—at the same time that censorship, deplatforming, financial blacklisting and doxing all threaten we Happy Few who fight for the future of America.

That’s why robust, clear-eyed and indefatigable reporting and analysis is critical.

Time is running out—the New Year is upon us. If you seek a tax deduction, December 31st is the last day you can donate online to VDARE.com. (Checks mailed to VDARE Foundation, PO Box 211, Litchfield CT before the first of the year often take some time to get to our office, but that’s ok. As long as the date on the check says it was written in 2019, you’re in the clear!)

With your help, we’ll continue to fight for the American values we hold dear, as the Founding Fathers intended—"for ourselves and our posterity.”

And as always, thanks for reading.