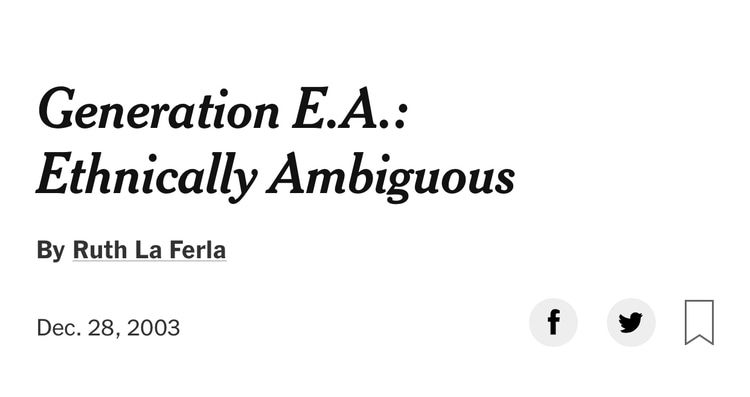 About a year ago, I noticed that during television ads I could no longer identify the models' ethnicity.

Up until that time, politically correct ads went to great pains to have an equal distribution of males and females who were black, white, Asian and Hispanic.

I called the models "blended people." But the official term, I recently learned, is "ethnically ambiguous."

In a December 28 2003 New York Times column titled "Generation E.A.: Ethnically Ambiguous," reporter Ruth La Ferla quoted Ron Berger, chief executive of New York's advertising and trend research company Euro RSCG MVBMS Partners, "Today what's ethnically neutral, diverse or ambiguous has tremendous appeal both in the mainstream and at the high end of the marketplace. What is perceived as good, desirable and successful is often a face whose heritage is hard to pin down."

Advertisers make no bones about it. They purposely seek out models with indeterminate features for their shoots. An example is Indian model Ujjwala, the new face of the exclusive YSL Beauty Cosmetics. Her agent, Ivan Bart, says, "You look at her and you begin to play a guessing game. Is she Mexican, Spanish, Russian? The fact that you can't be sure is part of her seductiveness."

Among the 25-year-old and younger members of Generation Y, the most diverse population in America's history, multiracial is "in". Demographers point to sustained high levels of immigration and intermarriage between different groups of those immigrants as the driving force behind an increasingly multiracial America.

When the results of Census 2000 were first published, much was written about the seven million Americans who identified themselves as members of more than one race. These individuals took advantage of the opportunity the Census provided to check more than one category for race.

Another 14 million Hispanics skipped over boxes for black or white choosing instead "some other race."

[JOENOTE To VDARE.COM READERS #1: There will be snowballs in hell before any Hispanic checks "White" for ethnicity. "White" is how Hispanics disparagingly refer to Anglo-Saxons. For example, Art Torres in 1995: "Remember, Prop 187 is the last gasp of White America in California."]

Certain geographic regions are more apt to have significant numbers of ethnically ambiguous people. The obvious places that pop into mind are Los Angeles, San Francisco, New York and Miami.

Particular professions have a highly visible E.A. representation. In the world of fashion, film and music we look at Jennifer Lopez, Shakira, Cristina Aguilera and Vin Diesel.

For advertisers, ethnic ambiguity is a bonanza. H & M, a Stockholm-based marketer of cheap but cool clothing with stores in 18 countries use "racial indeterminate" models only. Said a spokesman, "For us the models must be inspiring and attractive but at the same time neutral."

So is America on a run-away freight train toward Ethnic Ambiguity?

The sub-rosa message in La Ferla's article is that Ethnic Ambiguity—through continued immigration and intermarriage—will make race and culture passé. And since the models and athletes chosen for the piece are strikingly beautiful and skilled, the conclusion we are urged to draw is that ethnic ambiguity will create the ultimate melting pot.

This one day may well happen. And perhaps we are indeed looking into America's future on our television sets.

But to find out just how fast the U.S. might turn into an ethnically ambiguous country, I contacted one of the nation's experts on population and intermarriage, VDARE.COM's own Steve Sailer.

As for the immigration portion of the Ethnic Ambiguity equation, Sailer found that recent immigrants are the least likely of groups to intermarry.

Despite the buzz from the image-makers, progress toward total Ethnic Ambiguity, whatever opinion you may have of if, is moving slower than it appears.

[JOENOTE TO VDARE.COM READERS #2: In fifteen years of teaching and living in the San Joaquin Valley, I know of two lasting interracial relationships, although there are certainly more. A Cambodian student and a Vietnamese student—both female—each married Mexicans. This is virtually unheard of and went against the wishes of both families.]