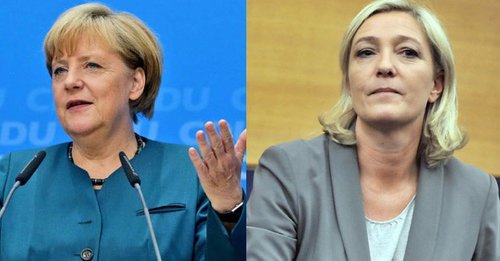 The terrorist who hijacked a truck in Berlin and ran over and killed 12 people, maiming and wounding 48 more, in that massacre in the Christmas market, has done more damage than he could imagine.

If the perpetrator is the jihadist from Tunisia who had no right to be in Germany, and had been under surveillance, the bell could begin to toll not only for Angela Merkel but for the European Union.

That German lassitude, and the naivete behind it, allowed this outrage validates the grim verdict of geostrategist James Burnham in "Suicide of the West": "Liberalism is the ideology of Western suicide."

Both the transnational elite and populist right sense the stakes involved here. As news of the barbarous atrocity spread across Europe, the reactions were instantaneous and predictable.

Marine Le Pen of France's National Front, leading candidate for the presidency in 2017, declaimed: "How many more people must die at the hands of Islamic extremists before our governments close our porous borders and stop taking in thousands of illegal immigrants?"

Geert Wilders, the Party for Freedom front-runner for prime minister of Holland, echoed Le Pen: "They hate and kill us. And nobody protects us. Our leaders betray us. We need a political revolution.

"Islamic immigration/Is an invasion," he went on, "An existential problem/That will replace our people/Erase our culture."

That will replace our people

"These are Merkel's dead," tweeted Marcus Pretzell of the far-right Alternative for Germany about the victims in the Christmas mart.

Nigel Farage, who led the campaign for British secession from the EU, called the Christmas massacre "the Merkel legacy."

Europe's populist right is laying this act of Islamist savagery at the feet of Merkel for her having opened Germany in 2015 to a million migrants and refugees from Syria and the Middle East wars.

Before Berlin, she was already on the defensive after mobs of migrants went about molesting and raping German girls in Cologne last New Year's Eve.

Even admirers who share her belief in a Europe of open borders, that welcomes immigrants and refugees from Third World wars and despotisms, sense the gravity of Merkel's crisis.

"Germans should not let the attack on a Christmas market in Berlin undermine liberal values," ran the headline on The Washington Post editorial Dec. 22. Alarmed, the Post went on:

"What Germany cannot and must not do is ... succumb to the siren song of the anti-foreigner right-wing, which has been gaining strength across Europe and moved immediately to exploit the attack ahead of the September 2017 national elections."

The New York Times delivered its customary castigation of the European populist right but, in a note of near-desperation, if not of despair, implored Europe's liberals not to lose faith.

"With each new attack, whether on a Christmas market or a mosque, the challenge to Europe to defend tolerance, inclusion, equality and reason grows more daunting. If Europe is to survive as a beacon of democratic hope in a world rent by violent divisions, it must not cede those values."

But less and less does Europe appear to be listening.

Indeed, as Europe has been picking up its dead and wounded for over a decade, from terrorist attacks in Madrid, London, Paris, Berlin and Brussels, the peoples of Europe seem less interested in hearing recitals of liberal values than in learning what their governments are going to do to keep the Islamist killers out and make them safe.

Liberals may admonish us that all races, creeds, cultures are equal, that anyone from any continent, country or civilization can come to the West and assimilate. That discrimination against one group of immigrants in favor of another—preferring, say, Lebanese Christians to Syrian Muslims—is illiberal and undemocratic.

But people don't believe that. Europe and America have moved beyond the verities of 20th-century liberalism.

The cruel experiences of the recent past, and common sense, dictate that open borders are Eurail passes for Islamist terrorists, who are anxious to come and kill us in the West. We have to deal with the world as it is, not as we would wish it to be.

In our time, there has taken place, is taking place, an Islamic awakening. Of 1.6 billion Muslims worldwide, hundreds of millions accept strict sharia law about how to deal with apostasy and infidels.

Scores of millions in the Middle East wish to drive the West out of their world. Thousands are willing to depart and come to Europe to terrorize our societies. They see themselves at war with us, as their ancestors were at war with the Christian world for 1,000 years.

Only liberal ideology calls for America and Europe to bring into their home countries endless numbers of migrants, without being overly concerned about who they are, whence they come or what they believe.

Right-wing and anti-immigrant parties are succeeding in Europe for a simple reason. Mainstream parties are failing in the first duty of government—to protect the safety and security of the people.