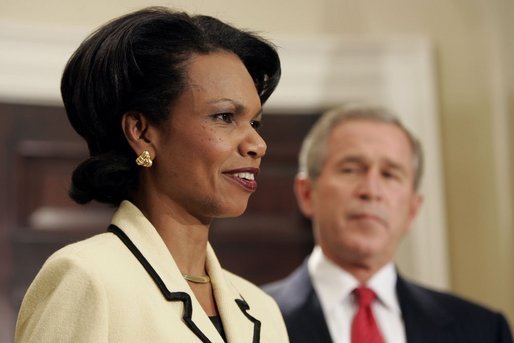 The purpose, you see, is to at least "split" the black vote because Miss Rice, being black, is certain to fetch in some votes from other blacks.

Leave aside the implicit bigotry of Mr. Beichman's strategy, which assumes that blacks are both sufficiently dumb and sufficiently racially obsessive to vote Republican if and only if a black is on the ticket. Leave aside also the implicit assumption, insulting to both Mr. Bush and Mr. Cheney, that they can't possibly win black votes by themselves, and consider the brazen kick in the pants to even a pretense of principle.

"With Ms. Rice on the ticket," Mr. Beichman gloats, "there is every chance the African-American vote would be split, especially when a Bush victory in 2004 would surely mean a Rice presidential nomination in 2008." Mr. Beichman ignores what sorts of policies Miss Rice might support, admittedly a minor consideration when all you care about is winning the election, but nevertheless a matter that might sooner or later come up, especially since the grand design involves Miss Rice ascending to the presidency a few years later. [GOP ticket option? By Arnold Beichman, July 9, 2003]

The Republican obsession with winning the black vote is mainly a contribution of the neo-conservatives that has swallowed the GOP mind ever since these frauds invited themselves to run the party back in the 1980s. It didn't work then, it didn't work in 2002 when Mr. Bush won only 8 percent of the black vote, and it shows no sign of working any time in the future. The victory strategy for the Republicans, with all due respect to Mr. Beichman, lies in winning the white vote—period.

If anyone understands this, it's the NAACP itself, which this week convened in Miami Beach to roast Republicans and threaten those Democrats who don't kiss its toe with sufficient reverence. The keynote was struck by the apparently deathless Julian Bond, who denounced the Republicans and the White House for representing the "dark underside of American culture," appealing to those "who reject democracy and equality," and whose "idea of equal rights is the American flag and Confederate swastika flying side by side." "We are and always have been nonpartisan," Mr. Bond added, reportedly keeping a straight face the whole time.[Full text of speech PDF]

But the vituperation about Republicans was only the warm-up. Some Democratic presidential contenders failed to show up at the convention because of other commitments. Tough. If you don't abase yourself and scrape and bow low enough, you don't get black votes. "When candidates choose to ignore the NAACP," President Kweisi Mfume spouted, "they have no legitimacy when they go into our communities later asking for our votes."

That was tantamount to a political death sentence for the missing Democrats — Reps. Richard Gephardt and Dennis Kucinich and Sen. Joseph Lieberman—who cannot expect to win the party nomination without solid backing from the black voters who now essentially dominate it. The 85 percent of the black vote Al Gore won in the 2000 Democratic primaries got him the party's nomination, as did the 70 percent Bill Clinton took in the 1992 primaries.

But Mr. Mfume's naked threat, like Mr. Bond's earlier blustering, ought to tell all Americans something significant. First, it tells us that the NAACP has appointed itself the chief arbiter of how black voters are supposed to vote. Since almost all black voters do in fact seem to defer to the NAACP and its pronouncements, it is probably correct in that claim.

Secondly, obnoxious windbags like Mr. Bond and Mr. Mfume also show how the NAACP and its leaders intend to use their power—in much the same way as African despots like Zimbabwe's Robert Mugabe use theirs, to demand the most abject groveling and humiliation from those unfortunate enough to come under their sway. Those who fail to exhibit such public displays of obsequiousness can forget the black vote.

And thirdly, the grim truth is that it is precisely because of the black racial solidarity on which the NAACP insists that the NAACP has any power at all. Whatever their flaws and misconceptions as leaders, gentlemen like Mr. Bond and Mr. Mfume know perfectly well that it is only through racial solidarity that a solid black vote for whatever Democrats have sufficiently groveled to them can be delivered. That's why there's not going to be any significant black vote for Mr. Bush and—among several other good reasons—it's why he should ignore Mr. Beichman's ill-considered advice.