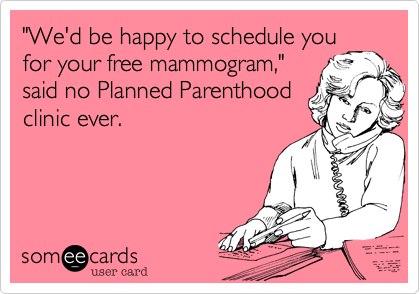 The gruesome hits keep coming for the baby butchers of Planned Parenthood. President Obama and his top health officials have one last-ditch response left: Quick, hide behind the imaginary mammogram machine!

As more graphic, money-grubbing undercover videos of Planned Parenthood's for-profit aborted baby parts racket emerge thanks to the investigative work of the Center for Medical Progress, desperate Democrats are in full deflection mode. U.S. Secretary of Health and Human Services Sylvia Mathews Burwell defended federal funding for Planned Parenthood this week by invoking the women's health shield. "What I think is important is that our HHS funding is focused on issues of preventative care for women, things like mammograms," Burwell told the House Education and Workforce Committee.

Just one teeny, tiny problem with this defense: It's a completely calculated fabrication.

The breast-cancer screening charade casts Planned Parenthood as a life-saving provider of vital health services unavailable anywhere else. You may recall that during the 2012 presidential cycle, Obama himself falsely claimed during a debate that the abortion provider administers mammograms to "millions" of women—and liberal CNN moderator Candy Crowley let him get away with it.

On cue, Hollywood activists Scarlett Johansson, Eva Longoria and Kerry Washington all attacked the GOP ticket for wanting to "end" funding for "cancer screenings" by cutting off government subsidies for Planned Parenthood's bloody billion-dollar abortion business. The celebrities in the White House and Tinseltown took their script straight from Dr. Deborah Nucatola, Planned Parenthood's senior director of medical services, who purported to speak for countless women for whom Planned Parenthood is "the only way" they can gain access to mammograms. (If the name sounds familiar, Nucatola is the same wine-swishing Josephine Mengele who was exposed on tape by the Center for Medical Progress two weeks ago lolling through a business lunch negotiating payments for aborted baby parts.)

Once again, it was undercover pro-life journalists who unmasked the truth.

An investigation of 30 Planned Parenthood clinics in 27 different states, conducted by pro-life group Live Action, confirmed that the abortion provider does not perform breast-cancer screenings. "We don't provide those services whatsoever," a staffer at Planned Parenthood of Arizona confessed on tape.

Even the liberal Washington Post doled out a three (out of four) Pinocchio rating for the White House's mammogram lies. "The problem here is that Planned Parenthood does not perform mammograms or even possess the necessary equipment to do so," the paper's resident fact-checker reported. "As such, the organization certainly does not 'provide' mammograms in the strict sense. Instead, its clinics provide referrals and direct low-income women toward resources to help pay for the procedure. These services are by no means unique to Planned Parenthood. In fact, the Susan G. Komen Foundation and the American Cancer Society provide them, as well."

As I've pointed out previously, Planned Parenthood's purported "referral services" to outside mammogram facilities are negligible—especially given the widespread availability of these and other free and low-cost breast and cervical cancer screening services across the country supported by both private and public grants.

Reluctant to do its job and just call out the president as an outright liar, The Washington Post fell short of giving Obama the full four-Pinocchio treatment for his Planned Parenthood mammogram propagandizing, but acknowledged that he has repeated the lies "too many times in one form or another for this to be considered just playing with words to generate a misleading impression."

The Obama HHS apparently needs to be reminded of its own review exposing the mammography deception. In June 2012, the agency responded to a request for information about how many Planned Parenthood clinics were certified to operate mammogram facilities. "Our search did not find any documents pertinent to your request," HHS told the Alliance Defense Fund. [PDF]

Pro-life investigative journalist Lila Rose of Live Action has it right: "It is an alarming dereliction of duty that the Secretary of Health and Human Services refuses to view investigative reports that clearly demonstrate that Planned Parenthood, who receives close to half a million taxpayer dollars a year from the federal government, is engaged in the selling and trafficking of aborted baby body parts for profit," she said this week. "Ms. Burwell should be investigating Planned Parenthood, not covering for them."

Ladies, open your eyes and hearts. Watch the videos for yourselves. Get the facts. Unmask the lies. The cackling profiteers of Planned Parenthood don't care about your breasts. They're too busy putting price tags on the baby hearts, livers, lungs and limbs swirling around in bloody pie plates, stacked in their "research" labs, subsidized with your tax dollars and sold to the highest bidders. For "preventative care," of course.