On the night when Hillary Clinton successfully played the racial-socialist card in the South Carolina Democratic primary against the white left-looney Sandersistas, I feel free to begin my reflections on Thursday night's CNN debate in Houston—I stayed awake, it was entertaining, or at any rate as close to entertaining as politics gets—with a couple of Adam Falk-certified Hate Comments.

There were a couple of other guys on the stage Thursday night: Ben Carson and John Kasich. They both have a good solid constituency each: Carson has evangelicals and Magic Negro yearners, Kasich has Ohio.

Both guys are hard to dislike—harder than Trump, I'll allow. Kasich seems to have been a capable and conscientious politician, though he'd be more impressive if he'd ever had some life outside politics.

Again, though, he's clueless about immigration. How many times do I have to point out that we already have twenty-odd guest-worker programs, and don't need another one? Why don't you listen, Governor? On the National Question, Kasich is an empty space. That disqualifies him for me and tens of millions of other Americans.

Carson everyone agrees is a no-hoper, and nobody at this point can figure out why he's still running. Vanity would be the usual answer; but vanity just doesn't fit with Carson's quiet, diffident demeanor.

Carson does give us some light relief, though. I'll declare him Best Supporting Actor in the GOP roadshow. His plaintive cry in Thursday's debate—"Can somebody attack me, please?"—got the most laughter of anything in the event.

I personally also got a chuckle out of his saying, in the context of how he would pick a Supreme Court nominee that: "The fruit salad of their life is what I will look at."

I hope it wasn't intended as a microaggression against some possible gay nominee.

I thought Wolf Blitzer did a decent job of herding the cats. I so covet that guy's name. "Wolf Blitzer"! If I get to choose a name for my next life, that's second on my list, right behind Brad Thor.

The only one of the questioners that registered with me was the Puerto Rican gal. Her accent was so heavy, I kept thinking of Googie Gomez in The Ritz. 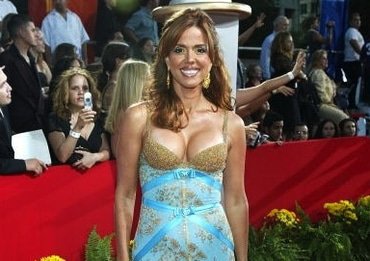 This lady (pictured above) was from some Spanish-language TV station, so of course all she wanted to talk about was Hispanics. She soon got Marco Rubio tripping over his feet about how he'd rescind Obama's executive orders on Central American illegals, but definitely not in any way that would inconvenience them. Quote: "This is not about deportation."

Well, Marco, it should be; and you just lost another ten thousand voters to Trump without him even having to say anything.

Googie then came out with the ethnic appeal, addressing both Rubio and Cruz. Why were they trying to out-tough each other on immigration, instead of "trying to prove to Latinos who has the best plan, the best platform to help them?"

Poor things!—so in need of help! How lucky we white people are: we don't need helping at all. We have our White Privilege, you see. For us life's just one long beach party. Or as Googie would say: "bitch party."

Cruz responded with something about his Dad's underwear. Rubio pulled out his worst line of the night: "We are the party of diversity, not the Democratic party."

There goes another ten thousand votes, Marco. Everyone in this country who can say the word "diversity" without rolling his eyes, is already going to vote Democrat. The rest of us are up to here with diversity, and want a candidate who's as sick of the diversity rackets as we are.

That would be Donald Trump.

Memo to the CNN suits: If you get to host another candidates debate and want to play the Hispanic card, why not cut out the middleman and go straight for Rita Moreno?

Donald Trump got knocked about considerably by Marco Rubio and Ted Cruz, to the degree he seemed to lose his composure a couple of times. At one point Trump actually yelled out, quote: "I don't repeat myself! I don't repeat myself!" It's not in the Washington Post transcript, but I know I heard it.

Trump also knocked himself about some. He was incoherent on healthcare, for example. What was all that about "the lines around each state"? And:

There is going to be competition among all of the states, and the insurance companies. They're going to have many, many different plans.

None of that—and none of what the other candidates said—gets to the heart of the matter. Which is, in my opinion, that our health is not insurable at the personal level because of pre-existing conditions. The point of insurance is to cover bad things that might possibly happen. A pre-existing condition has already happened. No rational insurance company will issue a policy to the person afflicted.

And as we understand more about the human genome, lots of us are going to find out we have pre-existing conditions we didn't know about—genetic dispositions to cancer, heart disease, stroke, and such. Half the population will soon be individually uninsurable on any rational grounds.

Insurance at the personal level doesn't work. It only works with a pool of people being covered, the healthy ones in the pool paying for the sick ones. Most First World countries take the entire population as the pool and have a government department run the coverage. Putting your life in the hands of government bureaucrats isn't optimal, but my English relatives grumble less about their healthcare than we do, so it's not that bad, and it works out way cheaper, with far less annoying paperwork.

Here I issue my usual challenge: to find a lobby of any size at all in any country at all agitating for that country to adopt the U.S. healthcare system.

Sorry, I got sidetracked there. Back to the debate. Trump had a couple of other wince-making moments. He flat-out lied about his 2012 position on self-deportation which Radio Derb reported on last week.

Then, right after that, he actually fell back on the Open-Borders lobby line about "jobs Americans won't do." Rubio had just accused him of hiring in foreign workers at Trump hotels. Trump replied:

As far as the people that I've hired in various parts of Florida during the absolute prime season, like Palm Beach and other locations, you could not get help. It's the up season. People didn't want to have part-time jobs. There were part-time jobs, very seasonal, 90-day jobs, 120-day jobs, and you couldn't get … You couldn't get help in those hot, hot sections of Florida.

They really weren't, though. Why not?

In a word: immigration. Rubio is staggering around with a monkey on his back—actually a great big gorilla: his support of the Schumer-McCain Amnesty/ Immigration Surge bill. The more gets revealed about this, the more shameful it gets. Just this week we got a reminder of how shabbily Rubio treated the head of the immigration officers union at meetings about the bill in 2013.

Ted Cruz is very little better, though in Thursday's debate he actually tried to position himself to the right of Trump on illegal immigration. This won't cut much ice with those who know the issue, as Cruz's problems are with legal immigration: his donor-driven eagerness to shower Green Cards on the world, so that employers like Disney can replace American workers with cheaper hires.

For those who care about the National Question—about our borders, our sovereignty, our demographic stability, and the living standards of American working people—Trump is still the only choice.

He's far from ideal, and might break our hearts. But he gets something important that Rubio and Cruz will never get.

So Trump came out of the debate with a split lip and an eye swollen closed, but buoyant. There was no knock-out here.

Onward and upward, Donald. You better put some ice on that eye …