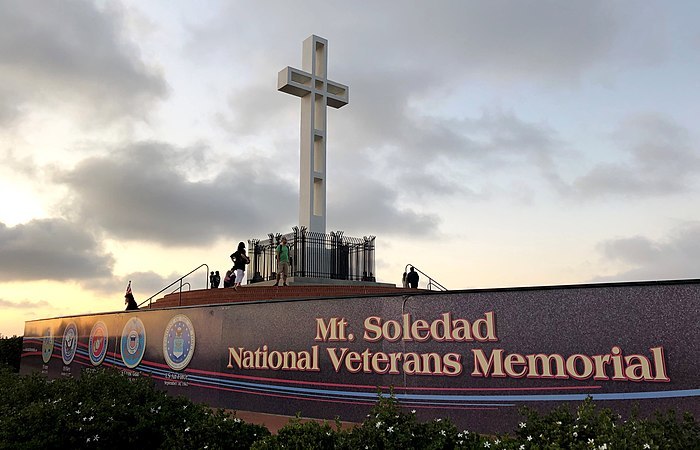 Cruciphobia at Mt. Soledad: The Cross the Left Can't Bear

Consider this: Taylor Swift wasn't even born yet when the fight over the Mount Soledad cross began. How much longer will it drag on? Disgruntled atheists first filed suit over the memorial at a veterans park in San Diego in the summer of 1989. The fringe grievance-mongers have clung bitterly to their litigious activities for nearly a quarter-century. It's time to let go and bring peace to the city.

The historic 43-foot cross has stood atop Mount Soledad on public land since 1954. The Mount Soledad Memorial Association erected the monument to commemorate the sacrifice of American soldiers who died in the Korean War, World War I and World War II. The cross has long carried meaning for the city's residents far beyond religious symbolism. "It's a symbol of coming of age and of remembrance," Pastor Mark Slomka of the Mount Soledad Presbyterian Church said years ago when the case erupted. The San Diego Union-Tribune editorial board explained that the cross is "much like the Mission San Diego de Alcala and the cross at Presidio Park, both of which also are rooted in Christianity but have come to signify the birth of San Diego."

I first started covering the case as an editorial writer at the Los Angeles Daily News in the early 1990s. A federal judge initially ruled that the landmark cross's presence violated the California constitution's church-state separation principles. The city of San Diego put the issue before voters, who overwhelmingly approved a practical solution in 2005: Sell the cross and the park to the veterans group for use in a national war memorial.

A pragmatic, tolerant resolution with 76 percent of voters' support? Heavens, no! The extreme secularists couldn't have that. They sued and sued and sued and sued. By 2007, the state Supreme Court—affirmed by a state appellate court—had rejected the atheists' campaign. The courts affirmed the constitutionality of the San Diego referendum (Proposition A) and the sale of the cross to the Mount Soledad Memorial Association. The American Civil Liberties Union intervened to suppress and "de-publish" the ruling as a way to prevent its use in future litigation. They lost.

Lawyers for the Thomas More Law Center, which represented the memorial association, were relieved: "This decision protects the will of the people and their desire to preserve a historical veterans memorial for future generations." They've fought hard to remind America that the Founding Fathers fought for freedom of religion, not freedom from religion.

But still the cross-hunters press on. Fast-forward to Christmas week 2013. U.S. District Court Judge Larry Burns, who earlier had ruled in support of the cross, was forced to rule that it must come down in 90 days in the wake of a liberal 9th Circuit Court of Appeals decision overturning his prior decision. In anticipation of new appeals, Burns stayed the order. All eyes are on the U.S. Supreme Court, which refused to hear the case last summer.

Rabbi Ben Kamin, who lives in Southern California, responded sensibly to the hysteria of the Mount Soledad cross-hunters who claimed to be irreparably "hurt" by the monument: "After six decades, and hundreds of thousands of visitors, cyclists, hikers, thoughtful folks who simply admire the inspiring vista of land, sky and ocean, the Cross remains simply a beacon, a marker and a landmark." Kamin wrote that he "once lived adjacent to the site, and it did not bother me then, and it does not bother, offend or intimidate me now. I remain much more concerned about the glaring mercantilism that has by now drained all the fall/winter holidays, from Thanksgiving to Hanukkah to Christmas, of any dignity or theological poetry."

Amen to that. Militant atheists won't rest until every last expression of faith is eradicated from the public square. They don't stand for reason or religious liberty. They are vengeful purveyors of cruciphobia. The everlasting good news, of course, is that in the end, hope will triumph over hate. Faith will outlast fear. And God's love will prevail long after physical crosses have fallen.