Could There Be Twenty Million Illegals In The U.S.?

[Recently by D.A. King: Can Banks Profiteer From Illegal Immigration with Impunity?]

Most of us accept the above lies as a relatively harmless part of life in our United States. We are so accustomed to hearing them that we regard them as not worth the trouble to correct.

But what about this one:

“There are 8-12 million illegal aliens in the United States.”

If we accept these figures at face value, we do so at our national peril.

I believe that figure underestimated by half. And I think it obvious that many of the patriots involved with immigration reform realize the commonly stated illegal aliens statistics are low. Why we are stuck to 8-12 million as our figure for illegal aliens is hard for me to understand.  Perhaps this column will generate the necessary debate to bring the real figures to the front.

The official estimate of the illegal alien population has been regularly increased, last time in December 2003, by Homeland Security chief Tom Ridge, in a softening up action before the White House dropped its amnesty bomb. The “8 -12 million” range replaced an already outdated 2000 census figure of 6-7 million [one that was later corrected to 8 million.] 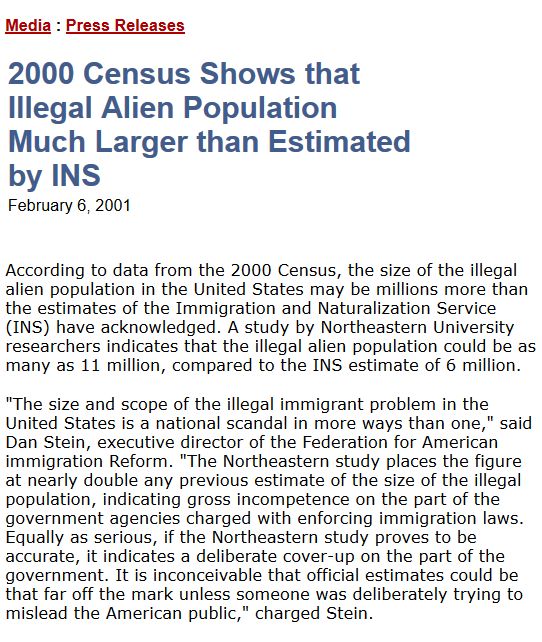 Almost immediately after the 2000 figures were released, at least one major immigration reform organization, issued its own calculation showing the absurdity of the census report. [2000 Census Shows that Illegal Alien Population Much Larger than Estimated by INS, FAIR press release, Feb 6,2001]

In the post-Census era, some observers offered thirteen million illegals as a realistic figure.

But that number did not catch on.

I am not alone in the suspicion that various federal agencies are misleading trusting American citizens.

We have allowed a government that permits the assault on our sovereignty to measure and report the level of damage that it, itself, is causing.

If we continue that to be passive, we will pay the price for not resisting.

As long as we participate in the illusion, we do so at the risk of minimizing our effort to educate the American public. And we help to cover up our most important ally—the truth.

Take this example from my own personal experience. During the 2000 Census, the view from my home office window looked directly out at the home of Mexican illegal aliens.  I can attest to the fact that they did not open their door for the police, dogcatcher, water meter reader, or code enforcement officer—much less the 2000 Census taker. Those who lived in that house wanted to hide—not share—the fact that 18 of them lived in a three-bedroom Marietta, Georgia home.

I suspect that if illegal aliens “live in the shadows“—as we have been repeatedly told— that they sure aren't coming into the sunlight when the Census Bureau drives up.

In April of 2003, Reconquista Georgia state senator in Georgia, Sam Zamarripa [D-36th] told the Georgia senate that there were “20 million people residing in our country without complete documentation”—his euphemism for illegal aliens. Here, finally, Zamarripa spoke the truth.

In a February, 2004 letter to an Arizona constituent, United States Senator John McCain admitted that Border Patrol apprehension statistics demonstrated that nearly 4 million illegal entered our nation in 2002. It is widely accepted that a similar number crossed our borders illegally the year previous, 2001.

Not included in that computation:  before that enforcement agency was forbidden to report it, the United States Border Patrol released information showing that the number of illegal crossers increased 20-25% immediately after Bush's amnesty proposal of January 7, 2004.

Last month, the Department of Homeland Security revealed that as many as 2.3 million residents have overstayed their visas. But that estimate too is low according to a recent Government Accountability Office [G.A.O.] report tells us that the number is considerably higher, and that millions of Mexicans (and Canadians) were not counted. GAO report on Overstay Tracking, text PDF]

Finally, Patrol Agent Luis Gonzalez, a staffer for Gloria Chavez, information officer with the United States Border Patrol in Washington D.C. recently  returned my phone inquiry concerning apprehension figures for the first half of 2004[ January- June]. The figures are as follows:

The official estimate is that Border Patrol is catching one in four or five illegal crossers. So we could have had 3-4 million illegal border crossers in the first half of 2004 alone. Thank you, Karl Rove!

I leave it to the reader to check the math. But based on what I see and read, there are 20 million illegal aliens living in the U.S.

If you buy into the 8-12 million range, then you must also believe that:

D.A. King [email him] is proprietor of The American Resistance.