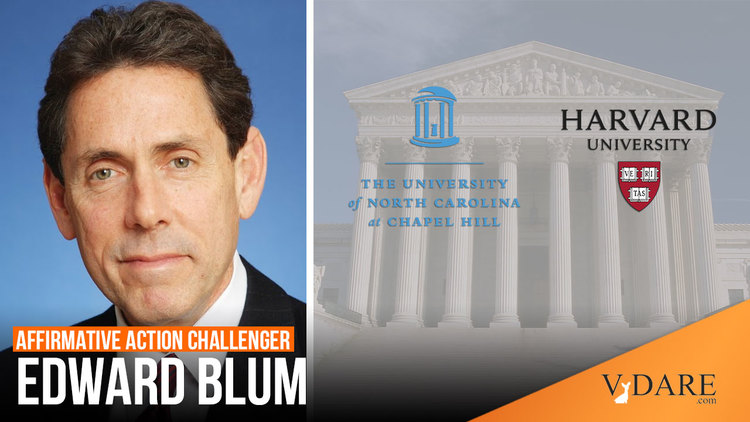 Conservatism Inc. Focuses On How Affirmative Action Hurts Asians–Ignores Its Impact On Whites Aka Americans

An Affirmative Action case before the U.S. Supreme Court has returned this issue—so critical to white success in higher education—to the political discussion. Students for Fair Admissions, Inc. v. President and Fellows of Harvard College, which incorporated the same plaintiff’s lawsuit against the University of North Carolina, could overturn racial preferences in higher education. SCOTUS is widely expected to end Affirmative Action for universities and pave the way for future attacks on the practice in employment and other areas of American life [Affirmative action is at death’s door at the Supreme Court, by Sam Baker, Axios, October 30, 2022]. That would be a huge victory for whites, but Conservatism Inc. seems quite uncomfortable with stating that fact. Their commentary focuses exclusively and obsessively on how Affirmative Action hurts Asians. They don’t seem to realize that, even in a post–Affirmative Action America, whites might still be shafted.

The case, for which the nine justices will hear oral arguments Monday October 31, could result in the overturning of the execrable Grutter v. Bollinger decision, which permitted anti-white discrimination in admissions—a decision the Bush 43 cuckservatives fully supported.

I am here in front of the US Supreme Court to support the end to affirmative action. SCOTUS hearing on Monday 10/31. #DoTheRightThing #EndAsianDiscrimination pic.twitter.com/HXPP2Z9Dve

That laser focus is not limited to National Review, of course. Writing in Newsweek, conservative lawyer Dennis Saffran demands we eliminate racial preferences in education for that very reason He argues that racial preferences hurt Asians even more than whites and are particularly bad because Asians are a minority. White don’t figure at all in Saffran’s argument:

The Harvard case in particular gets to the heart of the problem with the current use of racial preferences because it spotlights how Affirmative Action for Black and Hispanic students largely comes at the expense of another racial minority that has itself historically been subject to discrimination: Asian-Americans.

[Affirmative Action Is Racist—Against Asians. It’s Time for SCOTUS to Overturn It, October 24, 2022].

An even more absurd article appeared in The Federalist. Texas A&M recently implemented a new hiring program to increase the number of faculty from “underrepresented minority groups.” That excludes not only whites, but also Asians. However, rather than focus on how both groups are adversely affected, writer Jordan Boyd highlighted Asians. Asians are in his headline and “Asian” appears 10 times. “White,” on the other hand, is just mentioned twice. Thus Boyd quoted a white faculty member who is enraged about the program… because it’s bad for Asians [Texas A&M Faculty Senate Votes To Exclude Asian Job Applicants To Hire People With Preferred Skin Colors, October 19, 2022].

Project On Fair Representation’s Edward Blum, who took the cases to SCOTUS, similarly focuses on how Affirmative Action hurts Asians. His Harvard case cites only Asians, while the UNC case says the public university discriminates against Asians and whites. In an interview, Blum explained:

Conservatives also attack Critical Race Theory on the grounds that it is anti-Asian, even though it is simply a euphemism for anti-white racism. Chris Rufo, who popularized the term, claims CRT is bad because it is anti-Asian.

Sure, critical race theory is explicitly anti-white (in the clip, I reference Ignatiev's campaign to "abolish the white race"), but it is also anti-Asian, anti-rational, and anti-democratic. I think it is much deeper problem—"anti-whiteness" is merely one element.

Critical race theory is particularly galling to Asians, the so-called “model minority.” Its tenets are doubly racist—first stripping us of “minority” status because of our success and successful integration into the American fabric of business, homeownership, and the scientific and academic professions (and making inroads into every other field!). More insidiously, critical race theory limits the major vehicle for upward mobility in our communities: academic success.

At the same time, conservatives fear calling CRT anti-white, even though it is designed to demonize white culture, white history, and white people in general.

Why? Because the debate about Affirmative Action is conducted entirely on leftist premises. That means that, to make a compelling case for any political goal, you must argue that the present situation harms minorities and that your solution will help minorities.

Democrats argue for all their policies on this basis, from criminal justice reform to Amnesty. It’s all about helping “marginalized communities” or “people of color.” But Republicans—the Generic American Party—do the same thing. They frequently assailed abortion as a “black genocide” that disproportionately affected non-whites [“Abortion as black genocide”: inside the black anti-abortion movement, by P.R. Lockhart, Vox, January 19, 2018]. They’re doing the same thing with Affirmative Action.

Noticing anything that primarily harms whites is taboo because conservatives are terrified of being tagged as “racists” or “white nationalists” or whatever new devil term is applied to those who Notice anti-white racism or express any concern about the plight of whites. So conservatives bring up how anti-white practices, such as CRT or Affirmative Action, harm minorities to deflect from that attack.

This focus on Asians in discussing Affirmative Action would not be that big of a deal if it resulted in beneficial arrangement for whites. The ends matter more than the means.

But that very well might not happen. University admissions could still discriminate against whites even if SCOTUS overturns Grutter and ends racial preferences in higher education.

Look at California to see the results of eliminating racial preferences in admissions—done by Proposition 209 in 1996. Asians now dominate the best public colleges in the state [United States Colleges Ranked by Highest Percent of Asian Students, CollegeSimlpy.com]. CalTech is 45 percent Asian, four University of California schools—including Berkeley—are at least 35 percent. UC-Davis is 32 percent and UCLA is nearly 30 percent. Asians are just under 16 percent of California’s population, but more than a third of its elite college students. Meanwhile, whites are just 20 percent of students in the entire UC system while being 35 percent  of all Californians [U of California Gets More Diverse Without SATs, by Scott Jaschik, Inside Higher Ed, July 26, 2021].

Some 20-25 percent of the students at MIT, Stanford, and the Ivy League are Asian [Asian Americans, Diversity, and Meritocracy in College Admissions, AccessWire, March 29, 2021]. Without Affirmative Action, elite American universities would be at least a third Asian, a number that would rise over time. Would it be good for America if its elite becomes majority Asian?

At the same time, white numbers won’t likely increase substantially. Elite universities brag about how much they discriminate against whites and tout their majority-minority incoming classes. Facing an unfavorable SCOTUS ruling, those schools would think of ways to keep down white enrollment, most likely by giving more slots to Asians and enrolling more unqualified blacks and Hispanics. Indeed, universities already are doing so [Colleges Weigh New Admissions Strategies, by Melissa Korn, Wall Street Journal, August 9, 2022]. If the University of California system is any indication, they will succeed in having fewer whites and more Asians.