Brimelow On Krugman, 1998—Selected Reflections Of A “Hot Economist"

There are a lot of conservative economists -- plus "economists" like Kudlow -- who are running cover for Trump policies, and imagine they can avoid association with the racism. Sorry, it's all connected, and the taint will follow you all your days https://t.co/gBEEY36de3

VDARE.com note: In honor of Paul Krugman tweeting the piece of ethnic hysteria above, aimed at fellow economist (you don't need a license or a doctorate to be an economist) Larry Kudlow for not hating Peter Brimelow as much as the SPLC does, we're reprinting a 1998 Brimelow column on Krugman as an intellectual.

Most people think there are two intellectual Krugmans—the sound economist who has a Nobel, and the liberal Times columnist, who mindlessly repeats Leftist propaganda. Above, we see the third Krugman, a hysteric. See Steve Sailer's commentary  on Krugman's June 21, 2018 column Return of the Blood Libel  for more.

In the elemental conflict between publishers and writers, book- length collections of newspaper columns occupy a special place. Publishers resist them, allegedly because of poor sales, actually because they hate writers and want to see them suffer as much as possible before allowing their wretched names into print. Writers, who anyway tend to a healthy skepticism about publishers' marketing expertise, approve of column collections because they realize the format can be very effective, especially when the columns are set in context with incisive introductory essays, as in the case of Michael Kinsley's "Curse of the Giant Muffins," a classic of the genre. 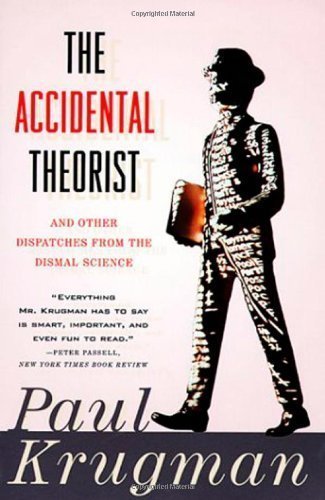 So the fact that Massachusetts Institute of Technology economist Paul Krugman gets to recycle his journalism in "The Accidental Theorist" is good news—for him. It is proof, if any were needed, that Mr. Krugman has been elected by Liberal Central (Publishing Affiliate), in its loveable hive-minded way, as Hot Economist, succeeding John Kenneth Galbraith and Lester Thurow. (Remember Lester Thurow?) Similarly, Mr. Kinsley was Hot Wunderkind.

Of course, it's great being a Hot Liberal Anything. You are asked to appear on network television, contribute to the Times (New York not Washington, alas), and to edit and write for online magazines founded by hero computer entrepreneurs under the inexplicable impression that anyone needs a new liberal rag. Thus Mr. Kinsley is editor of Slate, where many of Mr. Krugman's columns first appeared.

Indeed, reading this book, it is hard to avoid the odd sensation that Mr. Kinsley's happy face is leering out from the page. There are the same irritating but undeniably clever punning titles ("Bahtulism," on the problems of Thailand's currency, the baht), the same deceptively off-hand concessions to conservative arguments, and the same smart alecky—and if necessary vicious—defenses of core liberal undefendables. Most readers will prefer the real Kinsley. But the imitation is close enough to suggest that there is a factory somewhere churning them out—a disturbing thought.

Mr. Krugman exemplifies the phenomenon that Milton and Rose Friedman discuss in their forthcoming autobiography "Two Lucky People ": an economist who is technically proficient—recognizes the reality of supply and demand, a considerable advance since the days of Galbraith—but nevertheless retains left-wing political values.

Mr. Krugman's widely-respected academic work, which he discusses in several interesting passages, has focused on trade and exchange rates. His attacks on liberal anti-trade myths, for example as propagated by William Grieder in his " One World, Ready Or Not " will delight any conservative, except possibly Pat Buchanan. But as Liberaldom's Hot Economist, Mr. Krugman has a more serious task: explaining why anyone should pay any attention to liberals anyway, when they were wrong, and conservatives were right, on the central economic question of this century: whether socialism (liberalism/ statism) works better than capitalism.

The author's tactics are a fascinating example of the way in which liberals have been able to prosper despite this fundamental failure. Mr. Krugman's basic ploy is the maneuver known as "refusing the flank"—pulling back from the disputed point and directing enfilading fire on the opposition when they move forward to occupy it. Thus he concedes in his first lines that there is no real alternative to capitalism—but that "we" must "cushion" people from the market's "brutalities." The problem has changed, from inefficiency to inequity. But the solution remains the same: intervention.

Although his flip style disguises it well, Mr. Krugman sticks very determinedly to the defensive. He snipes constantly at policy initiatives that have been inconvenient for liberals, notably Ronald Reagan's tax cuts, but he risks proposing few new initiatives himself. He is (gratefully?) silent on issues that lend themselves to economic analysis but which are not yet on the public agenda—for example, the cost of affirmative action quotas, a simple exercise in regulatory economics that the academic industry has scandalously refused to perform, or the economic consequences of mass immigration.

Mr. Krugman is equally silent on price and wage controls, an issue once put on the public agenda by liberals but which has subsequently become an embarrassment. This silence has unfortunate consequences: He fails, in his chapter on health policy, to note that the United States is now slowly drifting into exactly the same mistaken method of allocating medical resources. The main point of his medical musings, significantly, is that the infinite demand for health care might provide a future rationale for raising taxes.

And sometimes Mr. Krugman's silence verges on the disingenuous. Thus he argues that economists are professionally inclined toward "environmentalism," by which he means command-and-control regulation. His reason: They are used to teaching in Economics 101 that a factory polluting a river is a classic case of market failure—the price system cannot capture the full social costs. In fact, of course, this is a failure to specify property rights. If someone owned the river, they would demand compensation. Mr. Krugman knows this, because in another essay he advocates pricing road use to reduce congestion.

(He may not know—there are some signs he has trouble grasping really radical libertarian conceptions—that the common law showed signs of developing a tort solution in these cases. But acknowledging that there might be common law solution to environmental problems would entail accepting that the tort system needs to be rescued from the trial lawyers, a key Democratic support group.)

Mr. Krugman reserves his real rage for supply siders. Of course, they can be irritating. And wrong: The writer skewers Wall Street Journal editor Robert L. Bartley for killing a recent commissioned piece, published here for the first time, that jeered at supply side fears that President Clinton's tax increases would abort the economic recovery. But how wrong were they, really? The expansion, although prolonged, has actually been comparatively weak. And that's without Mr. Clinton's other planned policies, such as the rapid socialization of health care.