Today, as not just Irish-Americans celebrate St. Patrick’s Day, Ireland itself is pluralist in religion, multicultural in urban areas, and has ceded its sovereignty to the European Union. It is unrecognizable from the country it was 50 years ago. The Catholic Ireland of saints and scholars is a thing of the past. What caused this dramatic change?

The influence of the Catholic Church on the Irish psyche cannot be overstated. The changes in every facet of Irish life are inextricably bound up with the declining role of the Church. As an indication of the Church’s former prominence in Irish society, the influential Archbishop John Charles McQuaid featured in the opening broadcast of the national television station, RTÉ, in 1961. Ironically, this station would become one of the most significant players in bringing about substantial change in Ireland.

Long before the sexual abuse scandals of the 1990s, the church’s influence had already begun to wane. Irish society was greatly affected by the major changes that took place in Catholic teaching as a result of the Second Vatican Council. Though the faithful were assured by Archbishop McQuaid that “No change will worry the tranquility of your Christian lives,” the liberalizing changes slowly but surely undermined the faithful’s allegiance to the Church. Post-Vatican II doctrine became so watered down at parish level that the Church lost its grip on the outlook of the believers.

With the loss of the Church’s influence went the people’s traditional view of how to safeguard their country. It was held in Church teaching up until at least the 1960s that every country had a right to defend itself and that nations and societies were founded on the family. The influence of the Catholic hierarchy and of Catholicism itself on governmental decisions of the past is beyond question. Divorce and birth control were banned. Censorship based on Catholic values was in place. The clergy also had a role to play in politics. For instance, as parliamentary secretary at the Department of Justice in the early 1960s, the future Taoiseach [Prime Minister] Charles Haughey often visited Archbishop McQuaid for advice on such matters as allowing the police force a representative body. To this day, the Constitution still bears the remnants of the Church’s power in State affairs.

The story of how Catholic Ireland became a multicultural “dystopia” can be seen more clearly by exploring the role of three influential figures, namely, Gay Byrne, Nell McCafferty and Alan Shatter. 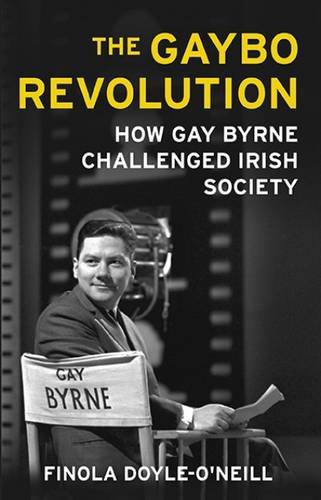 ” () Byrne has been one of the most recognizable and influential voices in Irish broadcasting over the past forty years. He is most famous for hosting a program called the Late Show, quite similar in content to the American show of the same name. From 1962 to 1999, Byrne easily retained a monopoly on the live talk show, both on radio and on television. He has been acknowledged by at least one author as shaping Irish society in regard to every aspect of modern life.

Byrne’s appearing middle class and conservative seems to have added to his appeal. He saw himself as a “facilitator and a conduit for open discussion”; and he was the first to break the ice on sensitive issues and didn’t shy from controversy. There is, according to his fellow broadcaster John Bowman, “no programme in the world in the whole history of television that has ever played as important a role as the Late Late Show played in the Irish society in the 1960s, 1970s and 1980s.”

One spring morning in 1984, Byrne spent the duration of his two-hour radio show reading letters from women who felt ostracized from Irish society for bearing children outside of wedlock. This had come soon after the lonely tragic death of a 15 year-old girl in childbirth at a roadside grotto. Byrne can be acknowledged with beginning a national conversation on unwed mothers and teenage pregnancy, a national conversation that would lead to dramatic change with regard to this issue.

Byrne’s detrimental mixture of information and entertainment was what is now called “infotainment.” Journalist Kathrine O’Brien refers to Byrne as “a media lay priest who specialized in a secular kind of liberal theology.” Another colleague of Byrne’s, Vincent Browne, described the broadcaster as a “mediator of change” and a man who could “challenge the conventions of our nationalist culture.” [Gay Byrne's departure marks end of unique era, Irish Times, May 26, 1999] His appearing as an honest and straightforward broadcaster rather than that of an anti-establishment warrior rewarded him with the nation’s trust. Byrne recently described himself as being “their outside line to the world,” an outside line to an Ireland that is long gone. 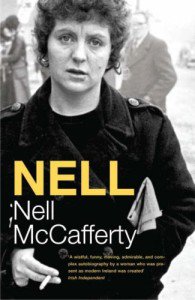 One of Byrne’s guests who would shock the nation was Nell McCafferty, a journalist, writer and renowned lesbian who had spent time volunteering on an Israeli kibbutz. She achieved fame through her part in what was called the contraceptive train, a publicity stunt in which an organization called the Irish Women’s Liberation Movement illegally brought contraceptives and condoms into the Republic of Ireland on a train from Belfast back in 1971. This was one of the most visible moves in Irish history to undermine the family and upset the country’s demographics. McCafferty would go on to feature regularly on the Late Late Show and the publicity led to an increase in the membership of the Movement. Members of the IWLM would found such highly influential organizations as Irishwomen United, Women’s Political Association, Irish Women’s Aid, The Rape Crisis Center and The National Women’s Council of Ireland, thus turning a large proportion of Irish women into feminists and liberals. 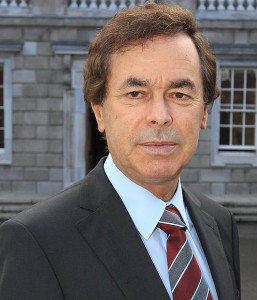 Like Nell McCafferty, Shatter worked on a kibbutz as young man. Born in Dublin to Jewish immigrants from Eastern Europe, Shatter has been to Israel frequently. Although he lost his seat in the recent general election, he had been a parliamentarian for 30 years before being appointed Minister for Justice and Equality and Minister for Defence in March 2011. He was forced to resign, however, after Taoiseach Enda Kenny presented him with a damning report on his handling of allegations of wrongdoing by the Garda Síochana [Ireland’s police force].

When Shatter was appointed Minister with two portfolios in the Fine Gael-led coalition government, The Jewish Chronicle celebrated with an article titled “Meet our man in the Dail, [sic].” [March 10, 2011]

Dáil Éireann [lit. Assembly of Ireland] is the lower house, and principal chamber, of the Oireachtas [Irish legislature]. Meanwhile the Times of Israel hoped that Israel may finally have some luck with the Irish [By Eamon Delaney March 11, 2013]. Noting Shatter’s first official visit to Israel in 2013, Delaney opined that the trip would offer “something new: a gesture of friendship from an outspoken Irish supporter’ and observed that “Israel could not have a more understanding or reliable Irish ally than Shatter, a stalwart supporter even during times of controversy.”

As a member of Dáil Éireann, Shatter defended Israel’s brutal 2009 invasion of Gaza. He also criticised the “freedom flotillas” organized in 2010 and 2011 to breach the Israeli blockade of the already-impoverished Gaza strip, although each of the aid expeditions included a ship from Ireland.

A pseudonymous article in The Occidental Observer, The Misplaced Minister: Ireland and Israel’s Alan Shatter, [by Camillus, March 2, 2013] suggested that Shatter “has in effect served as a second Israeli ambassador to Ireland, functioning without the diplomatic constraints of the former.”

In light of Shatter’s passionate attachment to the Jewish state, Camillus argued that “Shatter’s promotion of Third World immigration, as well as his long career as a lawyer promoting birth control, abortion, and gay marriage—takes on a more sinister hue.” Camillus also noted Shatter’s condemnation of “Ireland’s national television network for failing to depict today’s ‘intercultural Ireland’ rather than the homogeneous Irish people of decades past.” As for Shatter’s role while minister in charge of immigration policy in undermining Ireland’s erstwhile homogeneity:

Immigration to Ireland from outside Europe during 2011 was twice that of the previous year. Last year, the Irish Naturalisation and Immigration Service granted visas to 91 percent of the 88,000 non-Europeans who applied for them (citizens of the twenty-six other member states of the European Union can travel to Ireland without having to obtain a visa). An additional 115,000 migrants from outside Europe were given permission to remain in Ireland in 2012….

In order to advance his policy of Third World immigration to Ireland, Shatter played the multi-purpose Holocaust card. In autumn 2012, in a speech in honor of Raoul Wallenberg, the Swedish businessman who traveled to Hungary in 1944 to impede deportation of Jews to German concentration camps, Shatter condemned Ireland’s World War II immigration policy:

“There were many who did nothing in the face of the industrialized genocide and the destruction of European Jewish civilization. Indeed the Irish Government of the day sat on its hands. And even after the death camps were liberated, the Irish Government denied Jews refuge in Ireland.”

[State did nothing to save Jews, says Shatter, by Stephen Collins, Irish Times, September 13, 2012]

“It’s hard to imagine the mirror image of Alan Shatter in Israel,” The Occidental Observer’s Camillus concludes. “Just imagine one Alan O’Slattery, devoted to promoting non-Jewish immigration to the 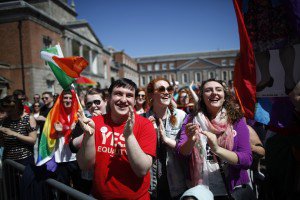 Zionist state and putting the military and diplomatic needs of Ireland above those of the nation he serves, wielding comparable power in Israel!”

In May 2015, Ireland became the first country in the world to legalize same-sex marriage by popular vote. There can be no greater indication or proof of the distance Ireland has traveled over the past half century. Catholic Ireland is well and truly a thing of the past. Today, the Brave New Ireland is in the vanguard of the West’s multicultural revolution.

Maidhc Ó Cathail [pronounced Mike Oh-Caw-hill] is a writer and commentator on U.S. foreign policy and the Middle East. His first book, Agents, Assets and Sayanim: Israel’s ‘People in Between’ You and the Facts will be published shortly.

Siobhán Ní Mhaoildhia is a writer and translator. She has just completed a new Irish translation of Wuthering Heights.