Flash Mobs, Samantha Mumba, And The Eloi Of Ireland

"There were "dozens" of witnesses to the rampage, so the cover-up must have taken some work. Or maybe not. The Irish are just as much—or more—under the thumb of liberalism as the rest of the Eloi-ized West. "[The worst black flash mob attack yet—in Ireland, by Africans ]

In comments he writes

"When I spent three weeks in Ireland in 1994—over a week in Dublin, followed by a clockwise circuit around the country—there were no nonwhites there. I mean I travelled through the whole of the Irish Republic for three weeks and did not see a single nonwhite person, except for one lightskinned black who looked like an American tourist. At an exhibit on the Easter 1916 Rising in the Irish National Museum in Dublin I got into a discussion with two young guards who said that they and other Irish didn't care any more about Irish national history or even Irish nationhood, they wanted to be a part of Europe. I told them that they they were wrong and that they should care about Ireland and want to preserve and protect it. Shortly after my return home, I began seeing news stories from Ireland about immigration there. I put the stories aside and didn't read them. I couldn't stand the thought that Ireland—which up to that point had, like a nation-sized Brigadoon, been untouched by so many of the ills of the modern world including non-Western diversity—was bringing this curse upon itself. "

When I think of Irish diversity, I think of Samantha Mumba, who was in the movie of The Time Machine in 2002, where she actually played one of the Eloi! 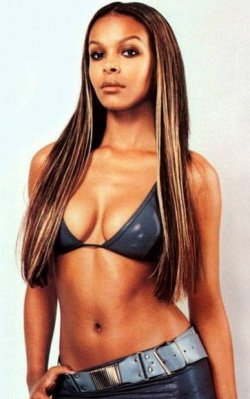 (Eloi, if you haven't read either H. G. Wells, or Lawrence Auster, are the "soft, pretty" race in the far future "who passively allow themselves to be slaughtered nightly by the savage Morlocks." Auster is using it as a metaphor for the kind of white person who becomes a victim through failing to stay out of bad neighborhoods, because it would be racist to stay out of bad neighborhoods). John Derbyshire, reviewing The Time Machine (2002), wrote

"The best reason to watch this latest version of The Time Machine is 19-year-old Zambian-Irish (no kidding) pop tart Samantha Mumba, who is exceptionally easy on the eye. I am speaking of her physical attributes only; she can't act. The long years in drama school — she started at age 3 — have left little trace, proving that talent is born, not made. Her accent lurches unpredictably from Dublin to South London to Los Angeles. I thought I detected a flicker of anxiety when she was about to be eaten by Morlocks, but her expression remains otherwise locked in a sort of vapid half-smile. She is, however, really good to look at. Her breasts are particularly fine. "

Saying this sort of thing occasionally gets Derbyshire in trouble. Here at VDARE.com, only run  pictures of young women for illustration purposes of political concepts. Samantha and her breasts got a mention in a more serious 2002 Derbyshire column on Irish affairs:

"Samantha Mumba is an Irish pop singer who plays female lead in the current movie of The Time Machine. Raised in Dublin by a Zambian father and an Irish mother, she represents the multiracial side of the new Ireland. Like other European countries, but more noticeably so because Ireland's prosperity has come so quickly and recently, the country has been sucking in immigrants from East Europe, North Africa and the Middle East. There have been pitched battles between the travelling "Tinker" people, who have been a feature of the Irish landscape for centuries, and newly-arrived tribes of Romanian gypsies, who covet the Tinkers' traditional occupational niches (pocket-picking, car stealing, etc.) Ireland seems to be particularly attractive to Nigerians, including those very skilful con artists you may have heard about, to whose persuasions the newly-affluent Irish seem to be very susceptible. Not all Irish people are yet ready to be cemented into the Gorgeous Mosaic, though. There have been some ugly incidents, and the government is now issuing vigorous declarations of its determination to stamp out "racism." Dubliners, who are a gambling people, are opening books on the year and month when the city will have its first race riot."

I think the bookies will have to pay off on this one.