BLACK PANTHER Will Be A Hit—But Will Blacks Side With The “Villain,” Killmonger?

Black Panther will be a monster hit at the box office in its opening weekend [‘Black Panther’ Heading Toward Massive $170 Million-Plus Opening, by Dave McNary, Variety, February 12, 2018]. My guess is it will surpass $200 million, as black identity and Main Stream Media cheerleading are creating a formidable marketing combination [Black Panther: does the Marvel epic solve Hollywood’s Africa problem? By Steve Rose, Guardian, February 3, 2018]. But while the top-down driven marketing campaign will almost certainly make the film a financial success, many blacks may take away the wrong message. After all, the real Afrocentric hero is “villain” Erik Killmonger—not Wakandan prince  Black Panther. 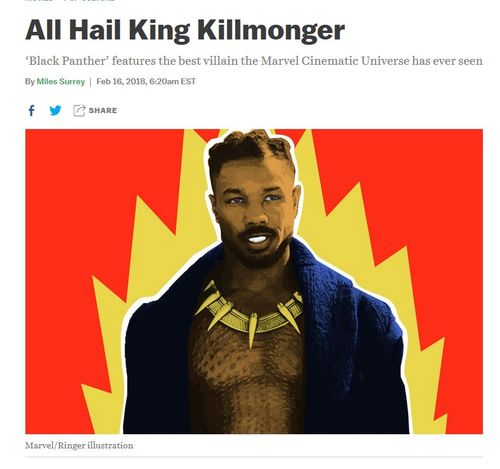 And which message people take away from this film is a desperately important question. After all, the MSM desperately wants this film to be a commercial success and is promoting it as a political milestone. The film already has a 98% fresh rating on Rotten Tomatoes—not surprising considering the website seems to be blocking anyone with a negative review, calling it “hate speech” [Rotten Tomatoes Will Block Anyone Who Tries to Sabotage ‘Black Panther’ Fan Score: ‘We Do Not Condone Hate Speech’, by Zack Sharf, Indiewire.com, February 2, 2018]. 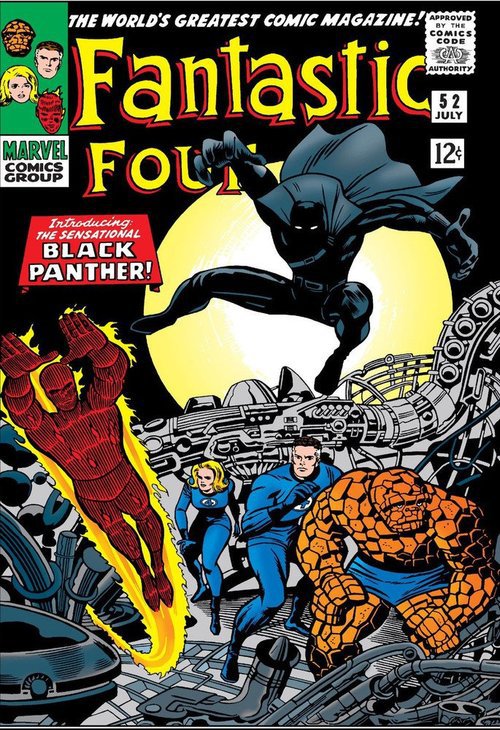 Despite the Black Panther character being created by two Jewish guys in the 1960s, the film is pure racial triumphalism [‘Young black people can be heroes too’: the campaign to send kids to see Black Panther, by Precious Mayowa Agbabiaka, Guardian, February 9, 2018]. it is being portrayed as a representation of what Africa would be were it not for European colonization [Black Panther is for film what Barack Obama was for the presidency, by Issac Bailey, CNN, February 9, 2018]. And it will have real world consequences:

South African actor John Kani, who plays King T’Chaka, told NBC News that this movie has a deeper meaning for non-Americans and people living in Africa.

“This movie will prove to the colonialists that if they had not interfered with Africa, we'd be so far advanced, may make them believe we built those pyramids in Egypt. No alien did them,” Kani said. “The metaphor is, Africa has great potential. Africa no longer relates to the world with a bag and bone. We’re looking for interaction and trade, not aid.”…

The idea of Wakanda and the Wakandan people serve as pure inspiration. Wakanda, as a model of the growth of the natural brilliance of an African nation that was never interfered with by the outside world coming in to colonize, to strip of its resources, to change their way of life - is an African utopia. 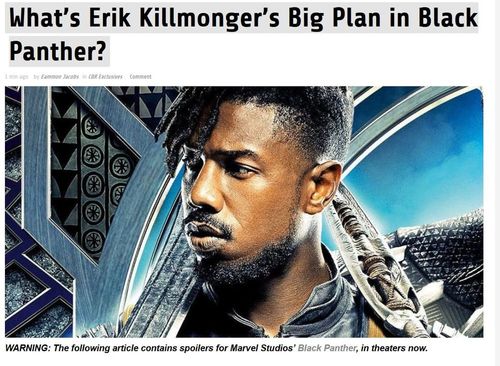 The fact this fantasy is seen as “proof” is disturbing. The film is telling blacks that the problems of Africans in the West and in Africa is simply the fault of white people. And this leads us to the film’s villain, Erik Killmonger.

Killmonger (whose character is a black American Spec-Ops soldier, something rare in real life) wants to utilize the military technology of the advanced African nation to enable black revolutionaries worldwide to wage war on white supremacy. The black experience in America is presented as justification for this mission of racial vengeance:

Michael B. Jordan adds fire as Killmonger, the radical who wants to pull Wakanda out of its comfort zone and into an armed struggle. That’s a storyline Coogler underlines by setting an early scene in Oakland, Calif., birthplace of the real-life black-power group.

Of course, though it is not explained in the film, the broader mythos of the comics has to explain why Wakanda not only survived European colonization but did nothing to stop it elsewhere in Africa. And there is an answer.

[Marvel Made a Black Panther Movie Partly Because Reginald Hudlin Put the ‘Black’ in Panther, by Todd Burroughs, The Root, February 7, 2018]

Talk about a bunch of Uncle Toms.

There’s a similar conflict in the film. The main dispute between Black Panther and Killmonger is over what Wakanda owes the larger black world. After all, if every problem blacks face is because of white racism, why shouldn’t Wakanda take action to stop it, given that it is vastly more powerful and advanced than the evil racist West?

It also doesn’t shy away from the fraught question being posed about what responsibility Wakanda has to the broader—white, colonial—world. Killmonger would say that what’s owed is a reckoning, a violent and necessary reshifting of power. T’Challa instead warily sees the potential benefit of peaceful outreach, of sharing ideas to heal past and current wounds. It’s complicated stuff, and not anything that Coogler offers an easy answer for. Watching these issues mulled over in a big superhero spectacular is quite something—it elevates the level of Marvel’s political discourse considerably.

Indeed, as Variety notes, Killmonger is in many ways the most compelling character:

Killmonger has more than just wreaking chaos in mind. He’s motivated by a feeling of deep political injustice, plus a “This time it’s personal” sense of vengeance, and he’s convinced that raiding the Wakanda’s stockpile of Vibranium could put genuine firepower in a worldwide black uprising.

It’s a compelling idea (enough to sway a key ally played by Daniel Kaluuya), and a reminder that throughout the African diaspora, the black-white power balance remains as it is courtesy of Jim Crow practices designed to keep minorities in check: persistent segregation, broken drug laws, racially targeted policing, disproportionately high incarceration rates — all of which are identified and indicted by Coogler’s truth-to-power script. Arm the oppressed, Killmonger passionately argues, and it won’t take a century for the system that produced “The Birth of a Nation” to grant a black artist the right to tell this kind of story — not that Coogler endorses the character’s lunatic ideas. 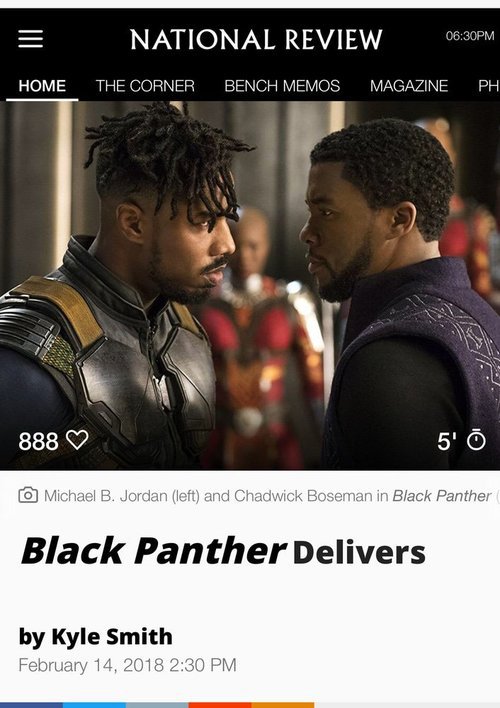 National Review, in a rather embarrassing attempt to get on board with the rest of the media, framed the film as a debate between Malcolm X (Killmonger) and the fake Martin Luther King Jr.  Beltway Right caricature:

Like many a great movie villain, Killmonger is seductive but wrong, and he stands for ideas that have considerable resonance in the real world. He channels the sense, memorably popularized by Malcolm, that the natural state of black people is to be kings. Black ghettoization was purposely engineered by duplicitous white people, who at first used enslavement but later turned to subtler methods of oppression...

Killmonger, then, wants the kind of race war Charles Manson dubbed helter skelter. That a large majority of the world’s most successful black people are American rather than African escapes the notice of such African-American radicals, who dismiss America’s opportunities for blacks and instead sentimentalize Africa in the same way Killmonger does.

Yet most blacks in America really do believe they are helpless victims and identify as black rather than American. This is why efforts by Conservatism Inc. to win even a minuscule share of the black vote has been such an embarrassing failure. Indeed, the hunger by blacks to be portrayed as “kings” who can defeat the hated whites is driving much of the appeal of this film.

A people who believe they are oppressed from cradle-to-grave will now have a movie where the villain advocates utilizing advanced technology to arm black revolutionaries to wage a war on white people worldwide. As Black Panther is a bit of an Uncle Tom, hanging out with the mostly white Avengers, Killmonger  could well end up being the true hero of the film to black audiences. After all, if the only reason blacks are held down is because of “white racism,” Killmonger is right.

Of course, we could say there are other reasons why blacks have problems. But if we say that, well, that would be racist.