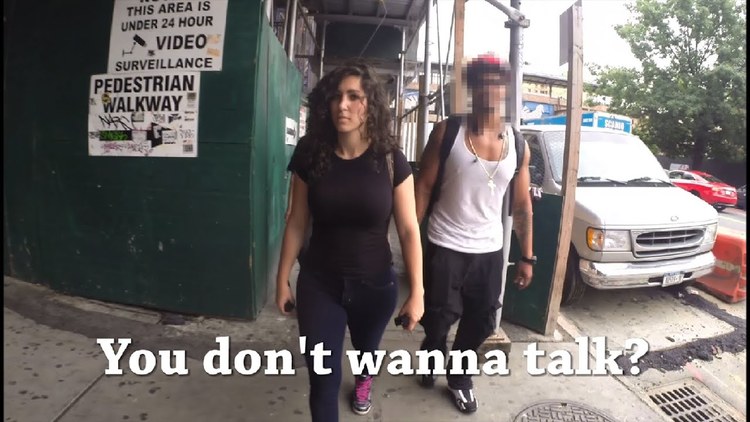 Diversity Is Strength! It's Also…Ethnic Come-ons

In an online conversation yesterday, my fellow coed Jenni vented to me about the declining club scene in Dallas, where she is currently attending school.

Deep Ellum, the entertainment district that was once known for its great restaurants, quirky boutiques, and impressive music scene, is collapsing. Two of Dallas' oldest and best venues have declared bankruptcy in the past six months.

If you ask the city, they'll blame anything from 9/11 to changing tastes. But the old regulars will tell you exactly what went wrong.

"It's not safe anymore," Jenni told me, "now that the city let them open the black clubs. Instead of local bands, everything is gangsta rap."

"Besides," she added, laughing, "we got tired of all the black guys commenting on our butts."

In the PC-saturated world of university life, it's amazing how frank girls can still be.

Several weeks ago, as I—well, ok, as my boyfriend—struggled to haul boxes out of my old apartment and into my new one, a young Mexican man called to me from outside the courtyard gate. He could hardly speak English. It was only through a series of grunts and gesticulations that he asked for the time. But, to my amazement, despite the apparently steep language barrier, he still managed a come-on, saying: "You must have a pretty mama," as I walked away.

It was only when I had to explain to my perplexed beau that this is a common way Mexican men hit on girls my age (I'm 21) that I realized how ethnically identifiable come-ons can be. Intrigued, I decided to ask around and see what my other girlfriends had to say.

As it turns out, not only are there different tastes and tactics associated with different ethnic groups, but they are well known. My informal interviews identified the following trends, each of which were, interestingly and perhaps surprisingly, universally confirmed among my friends:

And speaking of gropes,

This isn't just a vicious rumor started by intolerant college girls—the Japan Times has been reporting on how this problem has stirred some city train lines to introduce women-only cars. But that sort of segregation on my campus would inspire GLBTQA protesters to demonstrate outrage at forcing anyone to declare a particular gender.

Meanwhile, we co-eds just watch our backsides during the weekly Asian Student Alliance meetings at the student union.

Esther Pan of Newsweek announced some time ago that Asian boyfriends are the fashion accessory of the moment. Pan described the emerging "Asian machismo" that is apparently turning the nerdy, wimpy or androgynous Asian stereotype into a trendy, studly short-dark-and-handsome stereotype.

Trendy fashion accessory? That makes it sounds like any day now we'll be carrying them around in tiny Paris Hilton style Chihuahua cases studded with pink diamonds.  Frankly, I haven't seen much of either side. The "Asian machismo" emergence on our campus manifests itself as a gathering reputation for materialistic obsessions, hip-hop music, snazzy new technology and pumped-up cars.

Machismo may be diversifying into Asians, but that doesn't mean it's abandoned its origins. I noticed in my conversations that while discussions of blacks' preference for "junk in the trunk" and Asian's failure to keep their hands to themselves, were met with amusement and rolling eyes, the behavior of Mexican men was discussed with deadly seriousness.

Now, understand me. I'm not saying my Mexican college classmates behave this way. If they did, they would certainly be hung, drawn and quartered by the campus anti-harassment powers-that-be. Apparently, college acts as a kind of filter.

But it's in the time spent outside the classroom—walking through the nearby parks, down sidewalks, past train platforms or construction crews, across streets, down grocery store aisles—basically anywhere groups of Mexican males, young or old, may be assembled—that my girlfriends are exposed to these outbursts. It's not unusual to hear foul language, suggestive references to food, motherhood or specific body parts. Ultimately, it's loathsome and humiliating.

Once, while ascending as mall escalator, I found myself behind a Mexican family consisting of what appeared to be a mother, father, and two very cute twin girls. Halfway up, the father leaned over the banister and made a vulgar gesture toward a display on a lower floor. Turning to the mother of his children he said with a grin, "That mannequin has nice tits."

She didn't respond. She seemed to be used to it.

Is this what President Bush means when he says "Family Values don't stop at the Rio Grande?"

Of course, very few young males of any ethnicity were immune from my friends' criticism. Italians were identified by a swagger and the pickup line, "How YOU doin'?" Frat guys apparently only hit on the drunken girls.

And where have all the cowboys gone—Brokeback Mountain?