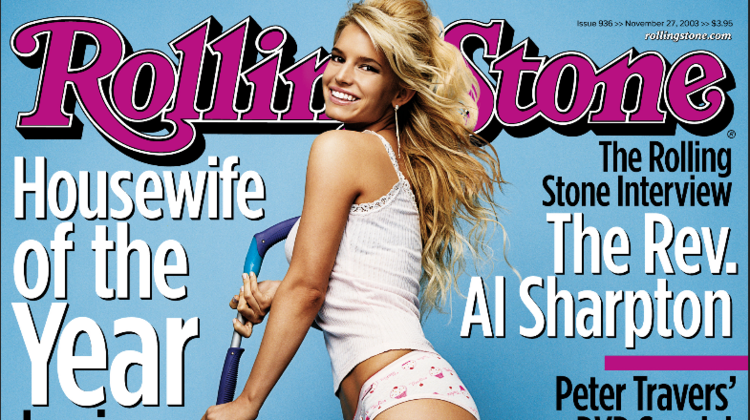 Witness the stratospheric rise of the vacant-eyed Jessica Simpson. She's the star of a top-rated MTV reality show whose cameras have captured her confusing the content of the Chicken of the Sea tuna fish brand for actual chicken, and suggesting that Buffalo wings are made of actual buffalo meat.

Now, she's inked a deal with ABC to bring her inadvertent comedic "genius" to a wider network audience.

Before she started uttering insipid things on MTV, Jessica was a moderately famous pop star with fluffy blonde hair, ample bosom, and nice legs. Pre-dummification, her main claim to fame—a very, very admirable one—had been that she remained abstinent until marriage. But in the twisted domain of Hollyweird, chastity simply isn't the ticket to an ambitious young woman's superstardom. Stupidity is.

The same "progressive" Hollywood celebrities who sneer at President Bush's mediocre college grades work in an industry that has long prided itself on, and profited from, popularizing anti-intellectualism. From Marilyn Monroe to Suzanne Somers to Anna Nicole Smith, the deification of the ditz has been a staple of the entertainment world.

Simpson's father, who serves as her manager and MTV show producer, is all too eager to cash in on his daughter's low-watt-powered fame. "What's happening here is Jessica knows she's on camera," he rationalized to TV Guide Online. "Since she was a little girl, people have been calling her a dumb blonde, [so] she begins to assume the role that everybody expects of her. That doesn't mean that's who she is. It's a part of her personality, but it's one that she's enhancing on the show. It's nothing that's not real, but she unintentionally exaggerates."

Proud papa Simpson explains that when Jessica caters to low expectations, it shows that "she's just a normal kid."

What a terrible message to send to young women and girls. Deliberately dumbing yourself down to enhance your popularity isn't "normal." It's degrading. Nevertheless, Jessica is delighted that exhibiting cluelessness and ignorance is now referred to by her peers as "pulling a Jessica."

Fortunately, parents looking for antidotes to Jessica Simpson syndrome and moron worship by the liberal Hollywood elite can find plenty of female role models in the media with beauty and brains.

FOX News Channel is chockful of smart women. News analyst Monica Crowley served as foreign policy assistant to President Richard Nixon, wrote two history books on Nixon's life, and holds a doctorate in international relations from Columbia University. Business anchor Brenda Buttner graduated from Harvard University with honors and went on to be a Rhodes Scholar at Oxford University, where she graduated with high honors with a degree in politics and economics. Anchor and show host Linda Vester is a magna cum laude graduate of Boston University with a journalism degree. She also holds an honors diploma from the Sorbonne in France, studied Middle East affairs in Egypt as a Fulbright Scholar, and speaks Arabic and French.

Syndicated radio talk show host and best-selling author Laura Ingraham is a graduate of Dartmouth College and the University of Virginia School of Law. She worked as a former white-collar criminal defense attorney, law clerk on the Supreme Court of the United States, and Reagan Administration speechwriter.

And syndicated columnist and best-selling author Ann Coulter—who now has a sharp-talking action figure modeled after her—graduated with honors from Cornell University and received her J.D. from the University of Michigan Law School, where she was an editor of The Michigan Law Review.

These women on the airwaves prove that you can be successful without compromising your IQ or your dignity.

Being cerebral isn't a bad thing, Jessica. And no, that doesn't mean acting like a corn flake.