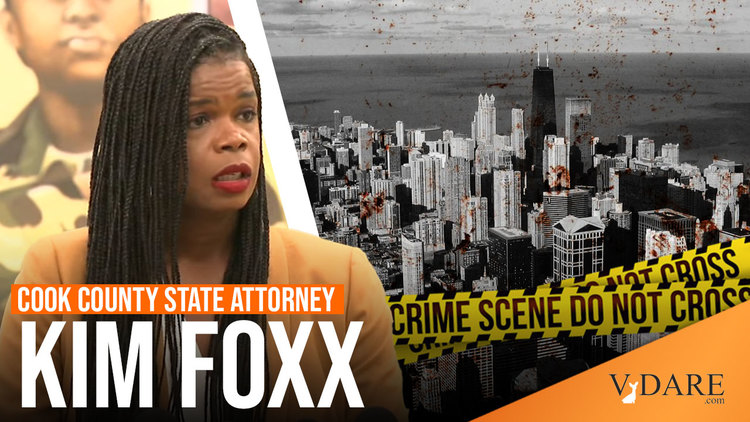 Ann Coulter On The Chicagoization Of American Criminal Justice: "Kill Back Better"

This isn’t a Chicago story. It’s a Democratic Party story.

Kim Foxx, the state’s attorney for Cook County and darling of MSNBC, has managed to increase murders in Chicago to astounding levels even at a time when we’re all getting used to astounding crime figures. Nationwide in 2020, murder and non-negligent manslaughter were up 29.4%, according to the FBI. That’s more than double the previous record of 1968, when murders increased by 12.7%.

Perhaps you’ve heard about the Wild West shootout in the Austin neighborhood of Chicago two weeks ago? One group of gang members shot up the house of rival gang members at around 10 in the morning. They blasted the house with more than 70 rounds, using handguns that had been modified into automatic weapons. Their rivals fired back from inside the home, in a gun battle that lasted so long, it was still going on when the police arrived.

All of this took place in full view of police street cameras, as well as the first officers on the scene.

Of the four initial shooters, one was shot dead at the scene and left behind. The other three took off in two (stolen) Dodge Chargers. One gang member drove to a medical center, dumped his wounded comrade, then led police on a car chase ending in a fiery crash. The other Charger turned up nearby, in flames.

Police arrested the two gang members from the hospital, as well as the three gunmen inside the home.

Foxx refused to bring charges against any of them on the grounds that it was “mutual combat.” At this point, the Chicago PD’s only option may be to resubmit charges on environmental grounds—polluting the air with lead.

Who knew that when Foxx talked about not prosecuting the small stuff, she was talking about murder and mass shootings? In today’s Chicago, the St. Valentine’s Day Massacre is legal.

Foxx’s bullheaded refusal to prosecute in this case was a shock to everyone in the country, except anyone living in Chicago. This is nothing new for the Democrats’ favorite DA. The police ought to put together a calendar of Foxx’s Released Murderer of the Month.

In July it was the murderer of Chrys Carvajal, a 19-year-old National Guardsman who was gunned down when he stepped out of a house party over Fourth of July weekend. Three eyewitnesses and video evidence led the police to a notoriously violent 38-year-old gang member.

August’s Murderer of the Month shot at a guy, missed him, but managed to hit two little girls sitting in the backseat of their family’s car after returning from church. Six-year-old Aubrey Broughton took a bullet through her lung, was rushed to the hospital and survived. But another bullet lodged directly in the heart of Aubrey’s sister, 7-year-old Serenity, killing her.

Again, the police investigated, found the suspect’s vehicle, evidence inside the car, and cellphone records pointing to a 24-year-old parolee.

Foxx refused to bring charges. (On the other hand, she did remind Serenity’s parents that she too, is a “mother,” so that was nice.)

Serenity’s mother complained that the police and prosecutors are “just bickering.” That was her assessment of the situation—not that Chicago has a prosecutor who won’t prosecute murder. This may explain why—in addition to George Soros’s $2 million donation—Foxx was reelected last year.

September’s Murderer of the Month was the killer of 18-year-old Manuel Porties Jr., who showed up for a fist fight and instead was repeatedly stabbed in the neck after being knocked to the ground. Naturally, the killing was captured on cellphone cameras of bystanders.

Foxx refused to bring charges against Porties’ killer, on the grounds that it was—again—“mutual combat.”

Due to the popularity of drive-by shootings and a “snitches get stitches” ethos, there’s already only about a 20% chance of being arrested if you commit murder in Chicago. Those are pretty good odds for taking another human life.

But even if the police catch you and present the prosecutor with video evidence, eyewitnesses, cellphone signals or a dead 7-year-old girl, Foxx is there to ensure that you will NOT go to prison. At this rate, Foxx might eventually kill off every living human being in Chicago.

But as I said, this is not a story about Chicago. Kim Foxx is a dangerous nut, but she’s not a random dangerous nut. She is the Democratic Party’s beau idéal of criminal justice.

Liberal moneybags George Soros has spent millions of dollars installing criminal-friendly prosecutors around the country. (Back before it was “anti-Semitic” to mention Soros’ pro-murder campaign, the New York Times ran an article boasting of the old prune’s role in electing inert prosecutors, like Foxx.)

A few hundred thousand dollars dumped into a minor DA’s race is more than enough to decide an election. Soros has spent millions. Foxx was Soros’ first success in electing DAs who would refuse to put another black man in prison.

They’re cool with dead black teenagers and dead 7-year-olds. The only black lives the Democrats care about are the lives of black criminals.

MSNBC, mouthpiece of the Democratic Party, was ecstatic the night Foxx won the election that would make her Cook County’s top prosecutor, with Lawrence O’Donnell giddily interviewing the pro-criminal Foxx. She was triumphantly interviewed again that weekend by Al Sharpton.

When has any prosecutor’s election drawn such celebration? When has it even drawn notice?

There is not a Republican in the nation who is not required to publicly state his position on Donald Trump. How about asking Democrats to take a position on Soros’ campaign to install nolle prosequi prosecutors? Apart from Sens. Joe Manchin and Kyrsten Sinema, will any Democrat in the country criticize Foxx?

No, of course not. As dead bodies pile up in Chicago under Kim Foxx, remember: This is the criminal justice “reform” Democrats want for the entire country.