Ann Coulter On Derek Chauvin: The Case Against The Mob

One of the main arguments being advanced by Eric Nelson, sole attorney for Derek Chauvin in his trial for the murder of George Floyd, is that the hostile crowd itself prevented the officers from attempting to perform CPR in the last minutes of Floyd’s life.

Even the prosecution’s “use of force” experts admitted repeatedly on cross-examination that a hostile crowd would justify Chauvin keeping Floyd restrained until an ambulance arrived. An officer’s duty to provide care is overridden by his duty to keep himself, the suspect and the bystanders safe.

As was evident from the videos (and admitted to by the bystander witnesses), they were shouting obscenities at the police, threatening them with bodily harm and, in a few instances, had to be held back from rushing the officers.

And of course, because of the presence of the angry crowd, the EMTs themselves did not stick around to provide care, but did a “load and scoot,” heaving Floyd into the back of the ambulance and driving three blocks to get away from the mob on the street. They didn’t even want to work inside an ambulance near this feisty group.

As it becomes increasingly obvious that the belligerent onlookers themselves may have gotten George Floyd killed by creating a dangerous situation for the officers, media commentators leap in to do backup work for the prosecutors by sneering at the idea that the officers might have felt threatened by a few rowdy teenagers.

Oh, the big pansies! So, a few teenagers yelled at the officers. Show me just ONE example of disaffected urban youth going from agitation to brawling!

Here’s one! One recent Saturday morning in May 2019, six teens beat the crap out of an off-duty firefighter on the Upper East Side because he stepped in to defend an elderly couple from the youths’ harassment.

And here’s another: A mob in Chicago attacked an older white man in 2016 for voting for Trump.

This one is outside a church in Memphis in 2016 after services. The instigating event is entirely unknown.

A video shows a huge brawl breaking out between church members in South Memphis. https://t.co/rYNZDESjHI pic.twitter.com/CApX6Nt4xp

Video: Major brawl erupts in the street outside a church service in Memphis 'after a car came by and ran down a group of people'

But the police were armed! Yeah, what are they going to do if one of the bystanders rushed them? Shoot him? Shoot them all?

Here’s a video of (armed) cops making an arrest in the middle of a crowd of rowdy teenagers at a carnival two years ago. 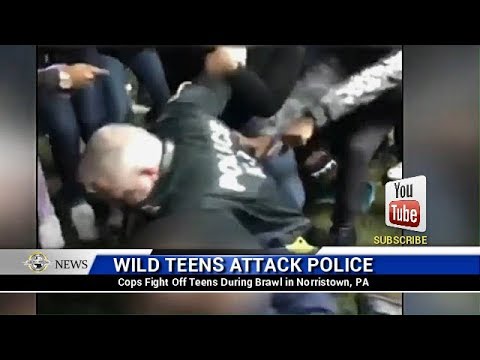 And here’s a 2019 video of a mob of students surrounding an (armed) police officer restraining a student. One student kicked him in the face.

Here’s a brawl that broke out in 2017 after a woman on a bus was bumped with a book bag. The mayhem continued with an attack on (armed) police officers called to the scene, who were bitten and spit upon. One boy tried to take an officer’s gun.

So, yes, I see your point, MSNBC, it’s completely crazy for the officers to have felt threatened by the agitated crowd of urban youth hurling epithets at them.

At least we can count on our media to report fairly on any case of a black man dying in police custody.

No, my mistake! For important news about America, we turn to the British press. It seems that Floyd had a long list of criminal convictions, including holding a gun to a pregnant woman’s belly during a home invasion robbery in Texas. See EXCLUSIVE: A new start turns to a tragic end for George Floyd, who moved to Minneapolis determined to turn his life around after being released from prison in Texas, Daily Mail, May 28, 2020 .

You won’t read about that in the New York Times! The Times briefly mentioned a “home invasion” in a single article about Floyd last June (27th paragraph—seriously). I guess they didn’t have space to mention Floyd’s pistol-whipping a pregnant woman.

Even the Houston Chronicle’s major retrospective of Floyd’s life skimmed past the violent home invasion in a few sentences about his period of “struggle”: “In 2009, Floyd went to prison after pleading guilty to aggravated robbery with a deadly weapon.”

That was it, in a Deep Dive article on Floyd’s life that was 1,500 words long.

It seems like an intriguing story to me. How about an interview with the victim, media? Anyone interested? Nah, let’s get to the story on Officer Chauvin’s taxes!

Yes, the Minnesota Department of Revenue and the Oakdale Police Department have done their part for BLM by poring over Officer Chauvin’s state tax returns and are now charging him with “tax fraud.” They claim that, over the past five years, Chauvin and his wife underpaid the State of Minnesota about $21,000 in taxes. There’s a real clickbait story!

There have been hundreds of news stories on Chauvin’s alleged tax fraud. (George Floyd, I assume, was always punctilious about his taxes. Probably an early filer.)

Rioting is good for ratings. Don’t expect the media to report the truth.