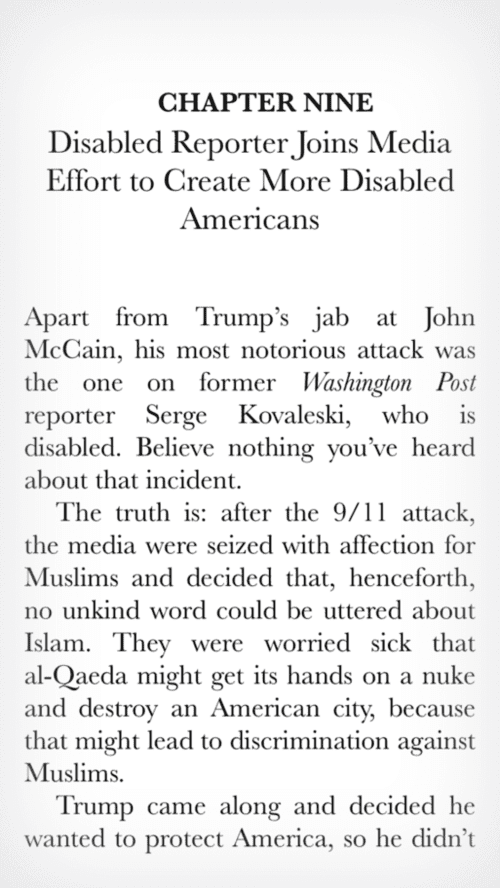 Just when you think the media could not possibly become more loathsome, the Fourth Estate bullies prove you wrong again. The Washington Post's latest ugliness was to exploit the disability of a newspaper reporter in order to smear the Republican nominee for president. Then—and this is the least surprising part of the story—the Post lied about it.

Other than the subject of that paragraph—which I slyly switched from Trump to the media—that is an exact paraphrase of the Post's opening lines from an editorial [November 27, 2015] hawking the media's most successful lie about Donald Trump: that he mocked a man for being disabled.

I have a chapter on that lie in my new book, In Trump We Trust: E Pluribus Awesome!, It was perfectly obvious that Trump was not mimicking any disability that Serge has, but I didn't have the smoking gun to prove that the media were lying and knew they were lying. Now we have it.

A group called Catholics 4 Trump has posted a video clip of another part of that same speech, in which Trump imitates a flustered general. Guess what? He does the exact same arm flailing.

In another speech, Trump pretended to be a timorous Ted Cruz. Again, he does the exact same arm flailing. You can see the videos here: The True Story: Donald Trump Did Not Mock a Reporter’s Disability , Catholics 4 Trump, July 27, 2016

Neither the general nor Cruz is disabled.

Perhaps Trump is not a subtle actor, but he's utterly innocent of making fun of a disabled person.

Now consider the media's role in manufacturing, and then protecting, this lie. Reporters were at Trump's speech. They were filming it. They saw him do the identical imitation of a general during that same speech.

The media knew damn well that Trump does the arm-waving routine whenever he's pretending to be a flustered person. But they never allowed the public to see the clip of Trump doing the same imitation of a general.

That is proof that the media knew they were lying.

And isn't it curious that in the midst of the frenzy over Trump's allegedly mocking a disabled reporter, you've never seen the reporter interviewed? Why don't they show us Serge, so that the public can gasp in horror and say, Why Trump's imitation is the spitting image of Serge Kovaleski!

The reason the media won't show an interview with Serge is that if you ever saw him speaking, it would be blindingly obvious that Trump's imitation isn't in the same universe as Serge's affliction. Serge speaks perfectly calmly. He does not twitch, jerk or flail his arms. (That's Debbie Wasserman Schultz you're thinking of.)

The absence of a current Serge interview is the dog that didn't bark. The only reason you will never see anything but a still photo of Serge is so that the media can trick the public into believing he has something like cerebral palsy.

In fact, his disability is almost the exact opposite of what Trump was doing: Serge has arthrogryposis, which locks his wrists in place, actually preventing movement.

We also have proof that the media know they are lying about Trump mocking a disabled man. In the "Comments" section to a Washington Post article pushing this lie, someone posted a perfectly respectful response that included the Catholics 4 Trump videos—of Trump doing the exact same imitation of a general and of Serge being interviewed. The Post deleted the comment—and pronto!

Why did the Post instantly remove those videos from the "Comments" section? To hide the evidence of its lying.

That's consciousness of guilt. The Post couldn't allow anyone to see those videos because then everyone would see that this is how Trump imitates any frightened person. Maybe he won't be hired by "Saturday Night Live" as a sketch comedian—and as you know, that show will hire almost anybody these days—but Trump did not "mock" a disabled man.

None of the media's other hysterical anti-Trump campaigns are getting any traction. Trump said a Hispanic judge was biased against him? It's hard for people to be outraged when our entire justice system is premised on the idea that all-white juries can't be trusted to deliver fair verdicts to black defendants. 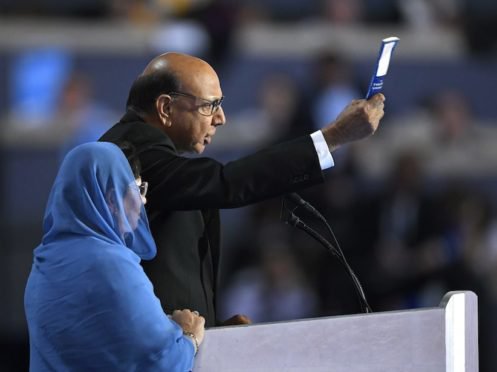 Trump criticized a Gold Star Dad? Yes, but that Gold Star Dad also happened to be a snarling Muslim who took the stage at the Democratic National Convention in order to viciously lecture Trump, saying he has no right to venture opinions because his kid didn't die in Iraq. Khizr Khan isn't exactly a baby seal.

Trump called Hillary the "MVP" of ISIS? Most people didn't need the media's earnest "fact-checks" establishing beyond dispute that ISIS has not, in fact, given Hillary the MVP award. Nor "Most Improved." Nor "Best Spirit.”

Of all things Trump has been accused of, the claim that he made fun of a disabled person is the only one that has hurt him—and justly so, if it were true. But now we know it was a big, fat, intentional lie by our guardians of truth and justice in the media.