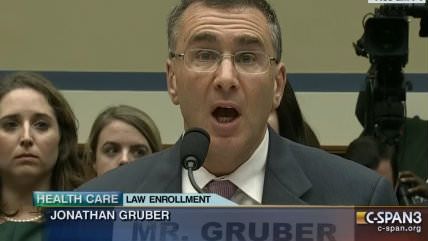 Go here for the sixth Jonathan Gruber video—details here, comments about "mislabeling" at 30:38—just to give you an idea of the scale of the revelations.

Gruber, who was paid half a million dollars to design Obamacare, is on tape bragging about how the Democrats relied on "the stupidity of the American voter" to pass that law. Which, ironically, was sort of a stupid thing to say on camera.

By now there are so many tapes of Gruber explaining how Obamacare fooled stupid Americans that they're being released as a boxed set in time for Christmas.

Gruber, who will hereafter be known as "the architect of Obamacare," said:

"If you had a law which said that healthy people are going to pay in—if you made it explicit that healthy people pay in and sick people get money, it would not have passed. ... Lack of transparency is a huge political advantage. And basically, call it the stupidity of the American voter or whatever, but basically that was really, really critical to getting the thing to pass."

The Downing Street memo consisted of minutes from a July 2002 meeting of British labor, defense and intelligence officials during the run-up to the Iraq War, in which the MI6 head, Richard Dearlove, reportedly said that "Bush wanted to remove Saddam Hussein, through military action, justified by the conjunction of terrorism and WMD. But the intelligence and facts were being fixed around the policy."

These notes from a British cabinet meeting were called the smoking gun of Bush's lying his way into war. The Downing Street memo was written about in dozens of New York Times articles—including six hysterical Frank Rich op-eds. It has been mentioned more than a hundred times in The Washington Post. It was covered on ABC's "Nightline," by George Stephanopoulos on ABC's "This Week," on NBC's "Meet the Press"—even on the "Today" show. It was discussed nightly on MSNBC, where Keith Olbermann covered it like it was Kim Kardashian and he was the E! Network.

By contrast, this week, NBC's Chuck Todd dismissed the Gruber tapes as "a political story" and The New York Times said of Gruber: "In truth, his role was limited." (NYT, March 28, 2012: "Mr. Gruber helped the administration put together the basic principles of the proposal, (then) the White House lent him to Capitol Hill to help congressional staff members draft the specifics of the legislation.")

The memo writer also wasn't being paid $400,000 by the Bush administration to make Iraq War policy. Jonathan Gruber was paid that much—plus another several million from the states—to design Obamacare.

You don't pay a half-million dollars to someone who is only peripherally involved in making policy. (Unless we're talking about Obama himself.)

There was no tape of Bush and Blair running around saying: Trust this guy—the memo writer is our guide! But that's what Obama, Nancy Pelosi, then-Sen. John Kerry and other Democrats said about Gruber.

The outrage over the Downing Street memo concerned the claim—in the memo writer's words—that the intelligence was being "fixed" around a policy. Although a number of commentators claimed that the British meaning of "fixed" is more like "arranged," let's assume "fixed" implies trickery.

It's still one word! Gruber has given six different speeches rambling at length about how Obamacare was intended to deceive "stupid" voters.

You can't say the Downing Street memo was a totally legitimate news story, but that the Gruber tapes are meaningless.

Ninety-nine percent of Americans were utterly unaffected by the invasion of Iraq—other than to be made safer, until Obama threw our victory away. Every American is affected by Obamacare.

The bald-faced lies told to pass Obamacare expose not only that law, but all Democratic economic claims. When Obama boasts that it will be a huge boon to the economy to give amnesty to millions of low-wage workers, who won't pay income taxes      but will need a lot of government services, remember: They said the same thing about Obamacare.