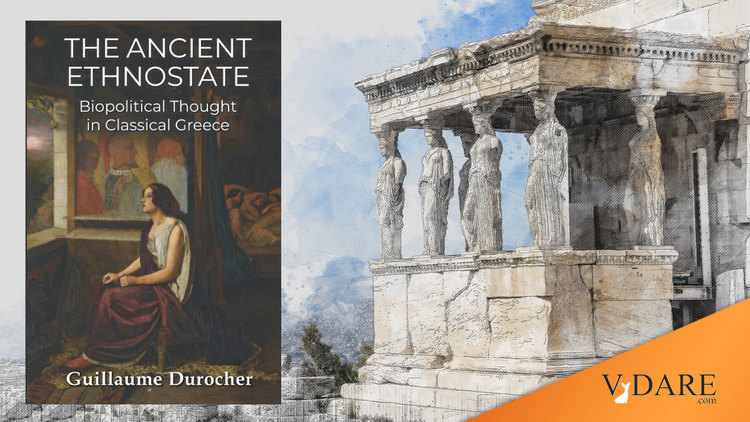 “We are citizens of our age as much as of our countries,” as Schiller  remarked, and one of the purposes of studying old books is to overcome temporal provincialism: the prejudices of the present. Our enemies certainly know this; that is why they have initiated the #DisruptTexts movement to “protect” young people from exposure to Classical literature. But even those determined not to be robbed of their heritage might experience difficulty in first approaching ancient civilization and its literary monuments. Guillaume Durocher [Tweet him], a dissident commentator not formally trained in the classics, has made the task easier by producing a readable book based on his own study of six Greek authors: the poets Homer and Hesiod, the historians Herodotus and Thucydides, and the philosophers Plato and Aristotle. This self-published work is The Ancient Ethnostate: Biopolitical Thought in Classical Greece.

VDARE.com readers will be sympathetic to Durocher’s civilizational concerns and pleasantly surprised at what he found: Aristotle expressed himself plainly  in his Politics on the subject of diversity and mass immigration; i.e., it was, in the end, disastrous for the host nation:

Dissimilarity of stock is conducive to factional conflict, until a cooperative spirit develops. For just as a city does not arise from any chance multitude, so it does not arise in any chance period of time. Hence those who have admitted joint settlers or late settlers [of different stock] have for the most part split into factions. [Politics, Book 5, Chapter 3]

Aristotle cites eight examples of ethnic conflict that arose from the imprudent admission of “dissimilar stocks” to Greek city-states. In some cases, the older group was forced to expel the newcomers en masse; in others, it was the newcomers who expelled their former hosts. At least two of these revolutions involved “battles,” which does not mean the rest were peaceful. And all these different “stocks” were Greek. One can only imagine what the philosopher might have said of the deliberate importation of different continental races.

Aristotle also emphasizes that xenophilia is a mark of tyranny:

It is characteristic of the tyrant to have foreigners rather than persons from the city as companions for dining and entertainment, the assumption being that the latter are enemies, while the former do not act as rivals. [Politics, Book 5, Chapter 11]

This is especially important in regard to the tyrant’s bodyguards:

Slaves, on the other hand, ought to be of varied stock in order to make it more difficult for them to cooperate and thus to minimize the danger of revolt. Such observations put the nature of today’s multicultural project in a clearer light.

Most of the Greek Classics do not speak quite this directly to contemporary concerns, but all reflect a world in which kinship (including racial commonality) was taken for granted as a primary source of the social bond.

This is in part because the world in which the ancients had to survive was competitive and dangerous. Often, strangers were hostile. War was an omnipresent reality. Men were judged by what they contributed to the central task of collective survival and victory, not by adherence to abstract moral ideals—and importantly, effeminacy was strongly discouraged.

Such an ethos is clearly reflected in Homer’s Iliad, the oldest surviving literary work of Greek antiquity. The aristocratic fighters at Troy adhere to a high-risk/ high reward way of life. As Durocher notes, the poem graphically records the violent deaths of more than 200 men: “brains splattered, bladders pierced, or innards slopping out.”  The victors win wealth, honor, and women. One Greek chieftain matter-of-factly urges on his men as follows:

Let no man hurry to sail for home, not till he beds down with a faithful Trojan wife, payment in full for the groans and shocks of war we have all borne. [Iliad, Book 2]

Harsh and brutal as was the society Homer depicts, it was also extremely adaptive in the evolutionary sense, ensuring the survival and spread of the toughest sort of men. This is what made possible the eventual cultural flourishing of the classical age. And whatever the basis of the Trojan legends, the society reflected in the Iliad, Durocher writes, unquestionably reflects realities about prehistoric Europe:

The Iliad immortalizes the Greek variant of a wider warrior ethos: that of the Aryans who burst forth into Europe some four thousand years ago and conquered the indigenous hunter-gatherers and farmers.

More importantly, the kill-or-be-killed world of Homer also reflects a timeless human reality with which we are likely to become reacquainted soon. “No civilization, no matter how rich, no matter how refined,” in the words of classicist Bernard Knox, “can long survive once it loses the power to meet force with equal or superior force.”

A society that relied heavily on kinship-based loyalty also understood and the importance of heredity:

The heroes love to recount their ancestors, often numbering gods among them. Heredity is a common theme. The great warrior Ajax remarks on one of the Trojans: “No coward, to judge by his looks, no coward’s stock, no doubt some brother of stallion-breaking Antenor, that or his own son—the blood-likeness is striking!”

These concerns were reflected even in the religion of the ancients, which was short on recommendations of good Samaritanism toward strangers and long on duties to one’s ancestors. The chief duty was to produce descendants. Marriage was mandatory, and not conceived as a private arrangement aiming at the personal fulfillment of individual men and women. Durocher quotes the French scholar N. D. Fustel de Coulanges:

The comparison of [Indo-European] beliefs and laws shows that the primitive religion created the Greek and Roman family, established marriage and paternal authority, fixed the hierarchy of kinship, consecrated the right of property and inheritance. This same religion, after having enlarged and extended the family, shaped a wider association, the city, and reigned in it as in the family. This explains the patriotism of the ancients, a vigorous sentiment which was for them the supreme virtue and that in which all the others culminated.

Some ancients even sensed the importance of eugenic selection. The poet Theognis of Megara (sixth century B.C.) lamented that men take less care over the choice of a wife than choosing which cattle or horses to breed, and are often influenced more by the size of a dowry than the natural inherited qualities of their future children. Plato actually included a eugenic program in the plans for his ideal city in The Republic.

While the Iliad celebrates a legendary war between European Greece and Asia, the city-states of the fifth century B.C. experienced a real invasion by the Persian Empire, far larger and better organized than their own combined forces. Herodotus, founder of the Western historical tradition, told this story.

The early Persians were a hardy race not so dissimilar from Homer’s Bronze Age Greeks—and, indeed, were related to them. But in narrating the rise of Persia, Herodotus shows how military success leads to wealth and then to the gradual decay of the masculine virtues. The relative poverty of Greece was an important factor in its eventual success against the superior numbers of Persia. In sharp contrast to the men of the modern West, Herodotus did not believe the accumulation of wealth fully compatible with freedom.

Freedom was another advantage the Greek city-states enjoyed over the Persian Empire, as Herodotus notes with reference to Athens:

While the Athenians were ruled by tyrants, they were no better at warfare than any of their neighbors, but once they had got rid of the tyrants, they became vastly superior. This goes to show that while they were under an oppressive regime they fought below their best because they were working for a master, whereas as free men each individual wanted to achieve something for himself.

In other words, the democratic regime gave ordinary men a stake in the system, thus motivating them to defend it.

As Athens developed its naval power, even the poorest citizens—those unable to afford traditional battle armor—began to contribute to the city’s military success as rowers and were eventually given a voice in the city’s affairs. This military reality was the basis of Athenian democracy, not any abstract discourse about “rights.” As classicist Paul Cartledge cautions: “Any attempt to detect even a quasi-metaphorical ‘liberal temper’ in Greek politics is deeply misguided.” The Greek concept of freedom was communitarian, not individualistic.

Our enemies are entirely correct to fear the embrace of the Classics by “The Extreme Right.” For our victory over them, when it comes, will result from learning to live by the timeless truths these ancient texts teach.