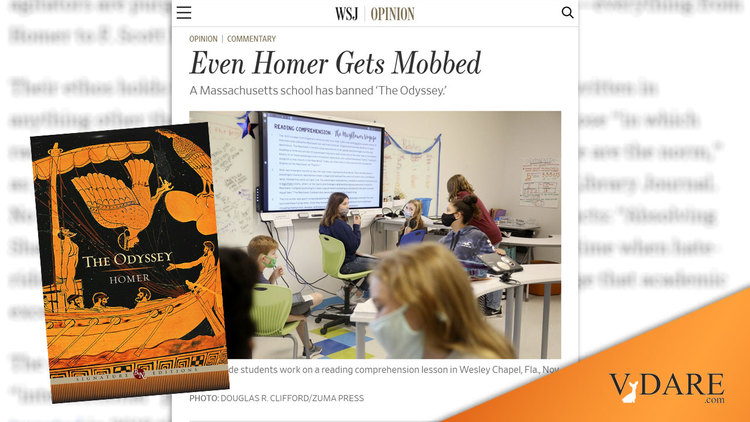 Classics Under Attack From The PC Mob

The reading and study of the classics used to be an important part of our educational system.  There's plenty of material.   English-language writers have written many famous books, and  many works of literature from other languages have been translated into English.

Nowadays though, much  of the market share of the classics has been taken over by the Young Adult Fiction genre, targeted to adolescents.

As Wikipedia describes it, "The subject matter and genres of YA correlate with the age and experience of the protagonist. The genres available in YA are expansive and include most of those found in adult fiction. Common themes related to YA include friendship, first love, relationships, and identity. Stories that focus on the specific challenges of youth are sometimes referred to as problem novels or coming-of-age novels."

But isn't one of the purposes of literature to read about people in very different life situations than we are?   The classics open up readers to broader horizons and provide common points of reference to the culture.

And now the classics are under attack from the PC mob.   These folks don't like young people reading books that might not be totally in accord with the PC standards of the 2020s.

That could include about anything older than a couple of decades, and maybe not even that old.

A sustained effort is under way to deny children access to literature. Under the slogan #DisruptTexts, critical-theory ideologues, schoolteachers and Twitter agitators are purging and propagandizing against classic texts—everything from Homer to F. Scott Fitzgerald to Dr. Seuss [Even Homer Gets Mobbed, by Meghan Cox Gurdon, Wall Street Journal, December 27, 2020].

So besides all the indoctrination your children are likely to receive in school, they want to take away the classics.   After all, they weren't written today.

Their ethos holds that children shouldn’t have to read stories written in anything other than the present-day vernacular—especially those “in which racism, sexism, ableism, anti-Semitism, and other forms of hate are the norm,” as young-adult novelist Padma Venkatraman writes in School Library Journal. No author is valuable enough to spare, Ms. Venkatraman instructs: “Absolving Shakespeare of responsibility by mentioning that he lived at a time when hate-ridden sentiments prevailed, risks sending a subliminal message that academic excellence outweighs hateful rhetoric.”

Indian-born Padma Venkatraman migrates to this country, becomes a successful author, and is now going to tell us what we can and can't read?

She wants to eliminate Shakespeare, the greatest writer in the history of our language, because "he lived at a time when hate-ridden sentiments prevailed"?

Might I suggest that  Padma is expressing a lot of hate herself, towards Western Civilization.

The subtle complexities of literature are being reduced to the crude clanking of “intersectional” power struggles. Thus Seattle English teacher Evin Shinn tweeted in 2018 that he’d “rather die” than teach “The Scarlet Letter,” unless Nathaniel Hawthorne’s novel is used to “fight against misogyny and slut-shaming.”

Outsiders got a glimpse of the intensity of the #DisruptTexts campaign recently when self-described “antiracist teacher” Lorena Germán complained that many classics were written more than 70 years ago: “Think of US society before then & the values that shaped this nation afterwards. THAT is what is in those books.”

C.S. Lewis wrote that people ought to read old books, precisely to be exposed to the ways of thinking of previous generations. That doesn't mean you are going to agree with everything in a classic.  Of course not.  But these rigid people don't think young people should be exposed to other ways of thinking and doing.

Jessica Cluess, an author of young-adult fiction, shot back: “If you think Hawthorne was on the side of the judgmental Puritans . . . then you are an absolute idiot and should not have the title of educator in your twitter bio.”

An online horde descended, accused Ms. Cluess of racism and “violence,” and demanded that Penguin Random House cancel her contract. The publisher hasn’t complied, perhaps because Ms. Cluess tweeted a ritual self-denunciation: “I take full responsibility for my unprovoked anger toward Lorena Germán. . . . I am committed to learning more about Ms. Germán’s important work with #DisruptTexts. . . . I will strive to do better.” That didn’t stop Ms. Cluess’s literary agent, Brooks Sherman, from denouncing her “racist and unacceptable” opinions and terminating their professional relationship.

Once again, somebody says something non-PC, catches some flak, surrenders, and gets hurt anyway.  Why not stand up for your principles?

The demands for censorship appear to be getting results. “Be like Odysseus and embrace the long haul to liberation (and then take the Odyssey out of your curriculum because it’s trash),” tweeted Shea Martin in June. “Hahaha,” replied Heather Levine, an English teacher at Lawrence (Mass.) High School. “Very proud to say we got the Odyssey removed from the curriculum this year!” When I contacted Ms. Levine to confirm this, she replied that she found the inquiry “invasive.”

So she's proud to have removed one of the greatest works of ancient European literature from her school's curriculum.   And when asked about it, she calls that "invasive".

“It’s a tragedy that this anti-intellectual movement of canceling the classics is gaining traction among educators and the mainstream publishing industry,” says science-fiction writer Jon Del Arroz, one of the rare industry voices to defend Ms. Cluess. “Erasing the history of great works only limits the ability of children to become literate.”

He’s right. If there is harm in classic literature, it comes from not teaching it. Students excused from reading foundational texts may imagine themselves lucky to get away with YA novels instead—that’s what the #DisruptTexts people want—but compared with their better-educated peers they will suffer a poverty of language and cultural reference. Worse, they won’t even know it.

These people hate anything that doesn't fit in 100% with their 2020s PC ideology.  They are making home schooling look more necessary than ever.