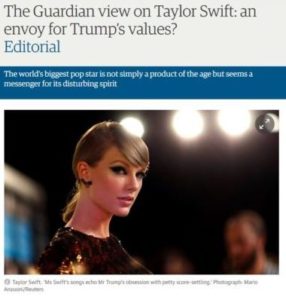 The Guardian’s recent slash-and-burn job on Taylor Swift (see Steve Sailer here, November 25) pointed up a couple of home truths about race discussion in the Main Stream Media. One is that, as Steve Sailer puts it, “It’s Not Okay to be White” in such fever-swamp precincts as The Guardian’s editorial board. The other is that—hate her or love her—the image of La Swift continues to serve as both whipping-girl and icon of traditional American whiteness. 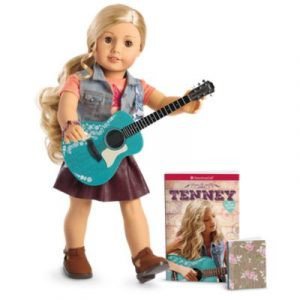 Consider this. After years of Diversifying itsbrand into utter meaninglessness, the American Girl Doll collection recently introduced a girl-singer doll into its lineup. Named “Tenney Grant,” and sporting a miniature acoustic guitar and denim-and-lace outfits, this new entry is quite clearly a proxy for Taylor Swift (or at least the country-singing Taylor of a few years back).

“She’s a breakout songwriter finding the heart to be herself,” reads the catalog copy.

“Ready for a true taste of Nashville? Tenney Grant is determined to shine by being just who she is.” To round out her character, the all-American Tenney has even been given a boyfriend, Logan Everett. He’s got brown hair and blue eyes, and is American Girl’s first-ever boy doll. 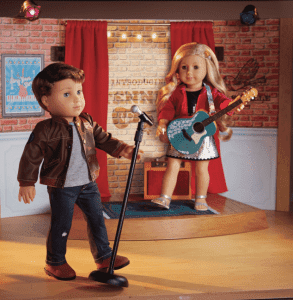 Now you may not be familiar with American Girl Dolls, particularly if you are not American, or a Girl, or a Doll fancier. So you should know they’ve been around for thirty years and are a big deal, with an ever-expanding line of expensive (>$100) and large (18″) dolls, doll clothing and accessories, and related books and toys. There are even chains of shops—American Girl Place, American Girl Boutique & Bistro—where you can browse and hang out, and order a customized poupée with the clothes, hair, and complexion of your choice.

American Girl began as a small collection of books and dolls in 1986, sold by a modest Wisconsin outfit called the Pleasant Company. For years its product line truly consisted of all-American girls, characters rooted in a specific time and place. Each doll came with a storybook, detailing her family background and the historical context of her time.

You could also buy the books separately. When I first came across the series in the late 1980s, I was much taken with the excellence of the illustrations, and had no idea the books were a tie-in to a line of dolls.

First out of the gate was Molly McIntire, who lived in small-town Illinois in the year 1944. Then came Samantha Parkington, in the NY Hudson Valley in 1904; followed by the somewhat more exotic Kirsten Larson, child of a Swedish family living on the American prairies in 1854. Rounding out the American saga was Felicity Merriman, of Williamsburg, Virginia, 1774. 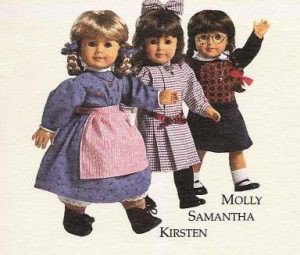 “Diversity” intruded into the lineup during the 1990s, with Addy Walker, a black slave girl, and a Mexican, Josefina Montoya.

(Literally a Mexican Girl, not like Judge Curiel—Josefina is pictured as living what is now New Mexico in the 1820s, when it was still under the rule of Mexico.) 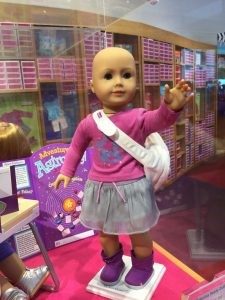 In 1998 the Pleasant Company was sold to Mattel, Inc., and that’s when the wheels really began to come off. Mattel ushered in a Red Indian girl, a Chinese girl, a Japanese-Hawaiian girl, a New Orleans colored-creole girl, a Jewish girl, and a present-day (2017) African-American girl who lives in Philadelphia and studies hip-hop dancing and ballet. All “American Girls,” if not exactly all-American girls.

Recently, as if to tick every box of Political Correctness, sick and handicapped dolls are being promoted. On display in the American Girl Place on Fifth Avenue in New York, one may see a doll in a wheelchair (doll + clothes: $115.00, wheelchair: $38.00), as well as a bald chemotherapy poppet.

Meanwhile, most of the original dolls have been retired, along with the original, intricately illustrated storybooks (beginning with Meet Molly in 1986). They’ve been replaced by an undistinguished assortment of juvenile “Be Forever” readers, “lapbooks” and “gamebooks.” 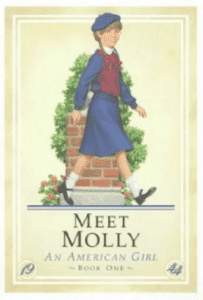 But having diluted the brand beyond recognition, Mattel/Pleasant now seems to be struggling to get back to its core audience. In 2017 it’s not only given us Taylor Swift avatar Tenney Grant, it’s relaunched Colonial girl Felicity Merriman, with a fresh new 1770s wardrobe. And “Molly’s coming back!” proclaims American Girl Doll News, promising a reissue of the Molly McIntire series of books in 2018.

No word yet on whether Molly the doll will herself be returning.

Jane Weir (Email her) is an American Girl living in an American town in the 21st century.