Trump Travel Ban Is Reported To Cause Anxiety Among Foreigners...!! 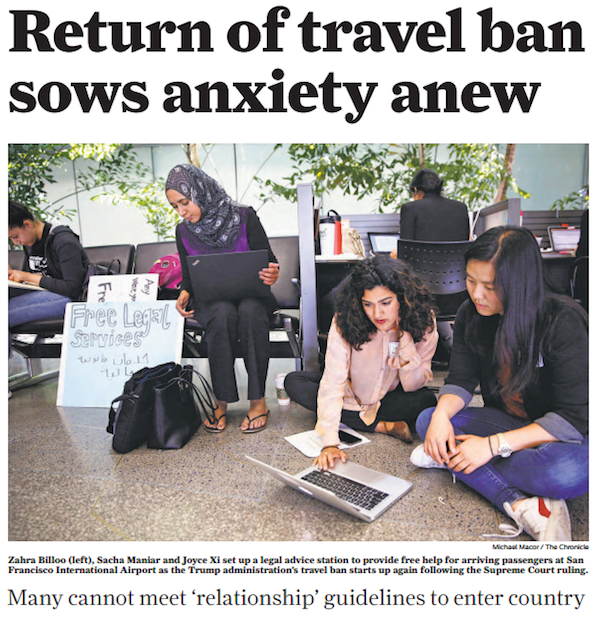 It will take some time for foreigners to get over the idea that the United States is their all-purpose flophouse to visit, illegally immigrate to, mooch from, steal medical care from, etc. ad nauseam.

Anyway, why is it odd for President Trump to keep out Muslims, who are historic enemies of 1400 years standing? They have vowed eternal war against infidels like us until the whole world is ruled by totalitarian Islam. Job #1 for the president is to protect the American people from enemies, and preventing the entrance of an unfriendly tribe is a good place to start.

Visitors from six predominantly Muslim countries and refugees from around the world lost their ability to gain permission to enter the United States starting Thursday evening unless they could prove a “bona fide relationship” to the country, the latest step in a historic fight over the Trump administration’s travel ban that is playing out in the courts.

Administration officials said those with visas as of 5 p.m. Thursday would be permitted, and they expected “business as usual” at airports across the country.

Still, civil rights attorneys who see the travel ban as a broad act of discrimination against Muslims returned in droves to San Francisco International Airport to ensure that immigrants would not be wrongfully barred entry, as they had been in January when the travel ban was first implemented before being halted.

Meanwhile, the administration — which called the ban vital to national security — clarified details of the order in an effort to comply with this week’s Supreme Court decision. The high court allowed the action to proceed in part but carved out the exception for people with “bona fide” relationships to people or entities in the United States.

Officials said applicants for future visas who are from Iran, Syria, Yemen, Libya, Sudan, and Somalia must prove they are the parents, spouses, children, children-in-law, siblings, fiances or fiancees of a U.S. individual or have a formal tie with an entity, like a university, in the country.

Grandparents, aunts, uncles and others were said to lack the necessary “bona fide” relationship, angering advocates for immigrants.Waivers can still be granted case-by-case for reasons such as “undue hardship,” the administration said.

Just before the ban was implemented, it was still changing. The State Department reversed itself and added fiances and fiancees to its definition of close family members.

Meanwhile, the lawyers for the state of Hawaii, which is challenging the ban, filed an emergency court motion. They asked U.S. District Judge Derrick Watson to “clarify” that the government must allow a broader range of family members to enter, including grandparents, grandchildren, aunts, uncles and cousins of U.S. residents.

The lawyers said they had attempted to confer with Justice Department lawyers since Tuesday, but received no response until an email Thursday that declared the government was in “full compliance” with the Supreme Court ruling.

Around the Bay Area, the enactment of the travel ban after many stops and starts prompted emotional responses from advocates as well as refugees like 59-year-old Kidanemariam Sebhat of San Francisco.

He and his family fled from Eritrea to Kenya and then waited more than five years to resettle in the United States. After being approved to come, their arrival was delayed this year by the travel ban.

“We were very stressed about the situation — we were cleared to leave but then we were put on hold,” he said. “You don’t know whether you’re going to leave or not. It was very frustrating.”

Finally, earlier this month, the family of three, including Sebhat’s wife and 17-year-old daughter, was able to move.

“I’m just happy for my daughter. She can have a good education; there is no interruption. We can have a good life here. That is my expectation,” he said. He added, “I feel very bad for the other families waiting to be resettled here. It will be very stressful for them.”

In another decision that legal experts predicted would be challenged, the administration said that a would-be refugee’s relationship with a resettlement agency in the United States was “not sufficient, in and of itself” to meet the Supreme Court’s standard.

“I think they’re completely wrong,” said Justin B. Cox, an attorney at the National Immigration Law Center, which represents refugee organizations in the ongoing case before the U.S. Supreme Court, which is expected to hear arguments in October. “They’re violating the plain text and spirit of the court order. … They are effectively abandoning people in dire circumstances abroad.”

The decision could bring a downturn in the number of refugees coming to the country, though officials said they could not estimate the impact. More than 49,000 refugees have come since October, including about 25,000 during the last three months of 2016 under former President Barack Obama.

The administration has set a cap of 50,000 refugees for the fiscal year that ends in September, but the Supreme Court said the cap could not be used to bar a person who otherwise met the criteria for entry.

Administration officials said the decision on resettlement agencies was faithful to the Supreme Court’s guidance. And they said that the decision to suspend the refugee program for 120 days and bar immigration from the six countries for 90 days was made to ensure security.

“As recent events have shown, we are living in a very dangerous time, and the U.S. Government needs every available tool to prevent terrorists from entering the country and committing acts of bloodshed and violence,” a White House official said on a background call with reporters.

Refugee resettlement agencies like World Relief, that work in partnership with the government, were scrambling to plan for next moves. Refugees with travel booked through July 6 will be allowed entry, officials said, but those coming afterward will have to prove the close relationship with a U.S. individual or institution.

Matthew Soerens, the U.S. director of church mobilization for World Relief, said about a quarter of the group’s clients had a qualifying family relationship. But he said there are many other “persecuted individuals who are uniquely vulnerable and have already gone through an extensive vetting process. It is very sad those individuals won’t be able to come.”

Karen Ferguson, head of the International Rescue Committee’s Northern California office, said that of the 2,500 people the organization is seeking to resettle in the U.S., around 1,950 do not meet the definitions set by the administration.

At the San Francisco airport, Christina Sinha, an attorney at the Asian Law Caucus, was among those who set up a station to advocate for travelers.

“There is a lot of confusion about what the order means,” she said. “We wanted to be on the ground — if folks needed help, we would be in a better position to help them quickly.”

Some Iranian Americans took to social media, using the hashtag #GrandparentsNotTerrorists and pictures of their families. Shayan Zadeh, an Iranian American who came to the country in 2000 and founded Zoosk, an online dating platform, said the decision not to exempt grandparents from the ban was an indication of its purpose.

“This ban is not about national security,” he said. “How can you make an argument that a ban on grandparents is for the safety of the country?”