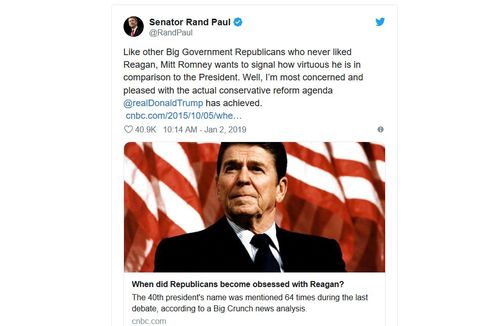 VDARE  RADIO is now available on  YouTube—go here to subscribe.

Well, as expected, Mitt Romney is attacking President Donald Trump again. He’s our new Jeff Flake, penning a sanctimonious, self-indulgent op-ed that is getting worshipful coverage in the Main Stream Media. There are even rumors that Romney is going to run against Trump in 2020 and thus throw the election to the Democrats, which is clearly what he wanted in 2016. [Romney asserts his independence—and Trump’s GOP critics see an opening, by Robert Costa, Chron.com, January 2, 2019]

Yet President Trump has his defenders. Among them is Senator Rand Paul of Kentucky. He’s been moving closer to President Trump, which is pretty amazing considering how the interaction between these two started. In the first GOP debate, Donald Trump said Rand shouldn’t even be on the stage, and famously dismissed him by saying he was “having a hard time tonight.”

Now, however, Rand Paul is defending the president against Romney. “Like other Big Government Republicans who never liked Reagan, Mitt Romney wants to signal how virtuous he is in comparison to the President,” Paul tweeted. “Well, I’m most concerned and pleased with the actual conservative reform agenda @realdonaldtrump has achieved.” He credits him with things conservative movement stalwarts would be pleased with, including tax cuts and slashing regulation, but also with a quote “America First foreign policy” that doesn’t obsess about “every problem around the world”. [It’s war: Rand Paul hits ‘Big Government’ Romney, calls Trump an ‘actual conservative,’ by Paul Bedard, Washington Examiner, January 2, 2019]

Rand Paul is also sounding some hopeful notes on immigration. While continuing to emphasize his fiscal conservatism, in an interview with Jake Tapper of CNN, he said he was not against border wall funding. “I would find it and pay for it,” he said. “Right now we’re spending $50 billion a year in Afghanistan, we could easily find $5 billion for a wall if we weren’t building and rebuilding Afghanistan.” This is the kind of framing that normal people can understand—why exactly are we spending so much money supposedly to “defend our country” in Afghanistan when we can’t fulfill our basic responsibilities at home?

Rand Paul has also been sounding some strong notes on foreign aid. He’s called for a hold on a bill that would have provided $38 billion, (meaning more than seven border walls), in aid to Israel. Somehow, he manages to frame this opposition to foreign aid as part of a general pro-Israel stance, and skillfully calls for no foreign aid at all to countries that hate America. Amusingly enough, this got him condemned by The Weekly Standard, which said he was indulging in a “diatribe against foreign aid” on December 6, 2018.

“Paul has outsized influence with the Trump administration, thanks to his emphatic belief in cozying up to Vladimir Putin,” the editors sneered. [Editorial: Stand down, Rand, Weekly Standard, December 6, 2018] Soon afterward, the magazine went out of business.

It should also be noted that Chuck Schumer, who won’t give one dollar to build a wall on our own border, went out of his way to lobby Rand Paul to free up tens of billions of dollars for Israel. [Chuck Schumer pauses gym workout to press Rand Paul on Israeli security aid, by Alyssa Fisher, Forward, December 14, 2018]

Much like President Trump, Senator Paul occasionally goes from being positively heroic to insanely frustrating on key issues. When he was first running for the upper chamber, he opposed birthright citizenship. Yet once he got in, he began supporting amnesty. He’s made noises about possibly supporting an immigration moratorium. However, he’s also endorsed the “proposition nation” hoax, claiming that anyone who wants to be an American should be able to be an American.

Rand Paul could be the kind of America First champion that President Trump, and the American nation, really needs. He’s relatively young, in a relatively safe Senate seat, and still enjoys libertarian support to a large extent. He clearly could become a major force not just in the Senate, but in the Republican Party. But in order to do that, he needs to lead on more than just spending and foreign policy. He needs to step up on immigration policy and stop waffling.

Border security is an obvious corollary of an American First foreign policy. Senator Rand Paul has been doing the right things lately, but he’s let us down before. But if he’s stays the course this time, he may become not just President Trump’s ally, but his successor.