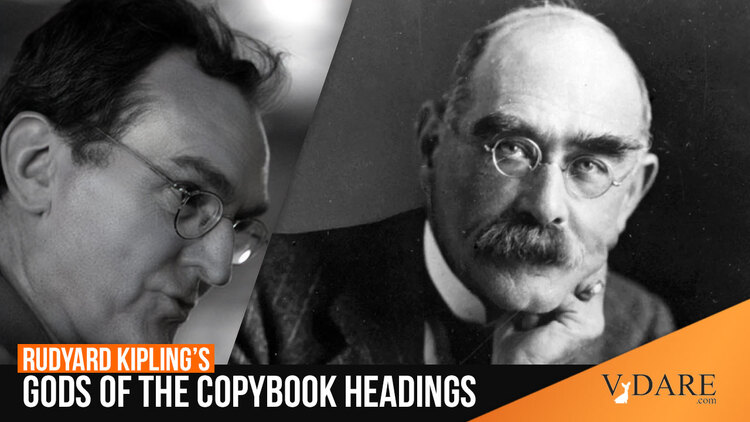 John Derbyshire is sick today, with flu, and can't talk, so no podcast, sorry!

As a substitute, we're providing one of his poetry readings from JohnDerbyshire.com, Rudyard Kipling's classic The Gods Of The Copybook Headings.

Published in October 1919 when the poet was 53 years old, "The Gods of the Copybook Headings" has proved enduringly popular, despite the fact that copybooks disappeared from schoolrooms in Britain and America during, or shortly after, World War 2. A copybook was an exercise book used to practice one's handwriting in. The pages were blank except for horizontal rulings and a printed specimen of perfect handwriting at the top. You were supposed to copy this specimen all down the page. The specimens were proverbs or quotations, or little commonplace hortatory or admonitory sayings — the ones in the poem illustrate the kind of thing. These were the copybook headings.

Kipling had lost his dearly loved son in World War 1, and a precious daughter some years earlier. He was a drained man in 1919, and England, with which he identified intensely, was a drained nation. Though he was no atheist, was in fact a Christian of an eccentric sort, Kipling seems to have found little consolation in religion. From Andrew Lycett's biography:

For spiritual values, Rudyard was still looking for accommodation with Christianity, his instinctive religion. He explained to Haggard [i.e. the novelist Rider Haggard, his friend] in May 1918 that occasionally he felt the love of God but "that the difficulty was to 'hold' the mystic sense of this communion — that it passes." True to form, Rudyard told his friend that God meant this phenomenon of the soul to be so — "that He doesn't mean that we should get too near to Him — that a glimpse is all that is allowed." In recording this in his diary, Haggard noted: "I think R. added because otherwise we should become unfitted for our work in the world." Rudyard's reliance on Masonry [i.e. Freemasonry] as a prop, as an "average plan of life," was clear when, that very same month, he, who had taken little active part in Masonry since Lahore, joined the Correspondence Circle of the Quatuor [sic] Coronati Lodge No. 2076.

At the time he wrote the poem, Kipling was embarked on his two-volume history of the Irish Guards — his son's regiment — in WW1. The project took him three years, and was, he remarked, "done with agony and bloody sweat."

With all this as background, it is hard to disagree with the general opinion that "The Gods of the Copybook Headings" is a clinging to old-fashioned common sense by a man deeply in need of something to cling to.

I tackled Kipling at some length here.

As I pass through my incarnations in every age and race,
I make my proper prostrations to the Gods of the Market Place.
Peering through reverent fingers I watch them flourish and fall,
And the Gods of the Copybook Headings, I notice, outlast them all.

We were living in trees when they met us. They showed us each in turn
That Water would certainly wet us, as Fire would certainly burn:
But we found them lacking in Uplift, Vision and Breadth of Mind,
So we left them to teach the Gorillas while we followed the March of Mankind.

We moved as the Spirit listed. They never altered their pace,
Being neither cloud nor wind-borne like the Gods of the Market Place;
But they always caught up with our progress, and presently word would come
That a tribe had been wiped off its icefield, or the lights had gone out in Rome.

When the Cambrian measures were forming, They promised perpetual peace.
They swore, if we gave them our weapons, that the wars of the tribes would cease.
But when we disarmed They sold us and delivered us bound to our foe,
And the Gods of the Copybook Headings said: "Stick to the Devil you know."

On the first Feminian Sandstones we were promised the Fuller Life
(Which started by loving our neighbour and ended by loving his wife)
Till our women had no more children and the men lost reason and faith,
And the Gods of the Copybook Headings said: "The Wages of Sin is Death."

In the Carboniferous Epoch we were promised abundance for all,
By robbing selected Peter to pay for collective Paul;
But, though we had plenty of money, there was nothing our money could buy,
And the Gods of the Copybook Headings said: "If you don't work you die."

Then the Gods of the Market tumbled, and their smooth-tongued wizards withdrew
And the hearts of the meanest were humbled and began to believe it was true
That All is not Gold that Glitters, and Two and Two make Four —
And the Gods of the Copybook Headings limped up to explain it once more.

As it will be in the future, it was at the birth of Man —
There are only four things certain since Social Progress began: —
That the Dog returns to his Vomit and the Sow returns to her Mire,
And the burnt Fool's bandaged finger goes wabbling back to the Fire;