Don’t look now, but PBS is about to dump six hours of diversity propaganda TV on the American public, curiously timed around the amnesty debate in Washington. How convenient for them.

In FY 2012, the feds spent $445 million to fund PBS TV and NPR radio, aka the Corporation for Public Broadcasting.

Clearly, no expense was spared in the production of Latino-Americans, with dual-language websites, a pretty picture book, numerous videos with the liberally conventional stories of suffering and success, blah blah.

Below, PBS heroically pictured Pancho Villa when he was a general in the Mexican revolution, but didn’t mention his attack on the town of Columbus New Mexico in 1916 when 19 Americans were killed by Villa’s army. 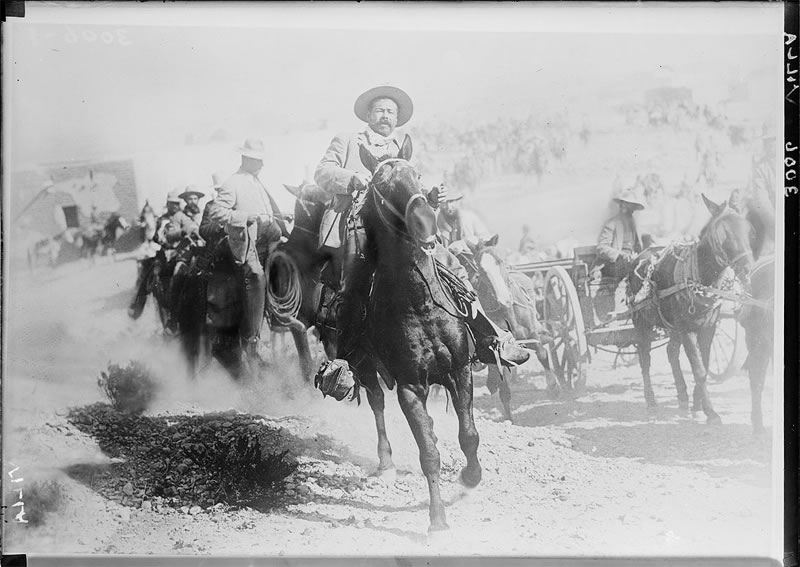 The blog section is odd indeed.There are individual blog postings, but the comments are all identical, at least when I looked on Sunday. They appear to all come from the item on Jewish Latino music. They are strange responses when read following the hateful blog about the illegal aliens who came to New Orleans after Hurricane Katrina (and never left). Residents of the Crescent City didn’t want their unique culture overrun with illegal Mexicans imported for cheap exploitable labor while local residents, black and white, were pushed aside for rebuilding jobs.

But to PBS, it’s all about the victimhood, whether truthful or not. (Contact PBS ombudsman Michael Getler if you have an opinion about such propaganda TV on the taxpayer tab.)

The blog item about New Orleans could be torn from the pages of the Raza handbook, being so full of lies, distortions and the complete disregard of American sovereignty. It’s pretty rich for the race-obsessed author to cite Hispanics’ “black brothers and sisters” when the foreigners invaded New Orleans and snatched rebuilding jobs from local people of color.

At no other time since my arrival in 1968 have I been witness to such blatant defamation of immigrants as I am seeing today, and the passing of Arizona’s SB 1070 by the Republican Governor Brewer in 2010 has spawned other copycat anti-immigrant laws in states like Georgia (May 2011), Alabama (June 2011), and South Carolina (June 2011).

I call these states the New Confederacy of the South passing Juan Crow laws that redirect their previous vitriol and racial poison towards African Americans towards brown Latinos today.

Basically, people who look like me because I’m a brown Mestizo Latino male, and based on the discretion of local police in any of these states, I could be detained and made to present my passport or green card to prove my status.

Imagine, if we were to see laws being passed where we required people of Jewish descent to have to show proof of their rightful status, if the many Hasidic Jews in New York were stopped and questioned about their legal status. There would be a very loud political fallout about racial profiling or living while Jewish. It is not like the Jewish people have not experienced this before in freedomlandia.

We, brown people, like our black bothers and sisters, know too well what it means to be stopped while simply being the colored other.

Now, there are laws in place to justify these assaults on our brown bodies by the authorities. When I decide to travel from Louisiana to the Florida beaches, I have to pass through Alabama and Georgia. I need to bring my passport along just in case because I will be driving while brown.

Welcome to the land of opportunity, and here is a new version of the American Dream gone wrong. Brown Latinos have been branded suspect—whether we are rightful citizens, legal residents, or undocumented workers.

Sadly, as I compose this chronicle, undocumented immigrants or their more common vilification of “illegal aliens” are being made the political scapegoats for everything that is wrong with “America” today, including its growing unemployment, unaffordable health care system, ineffective public schools, decaying infrastructure, and crumbling economy.

While I have expressed that I am a product of this “American Dream” mythology, raised by hard-working immigrant parents who owned a coffee-wagon business in New York City, I explore the underbelly of this belief system, and for thousands of Latino immigrants who were brought in to New Orleans to engage in the post-Katrina reconstruction, the dream to be able to work in the great empire too often turned into a hellish pesadilla.

All I can do as an artist is sound a clarion call to wake up and smell the café con leche.

The most painful aspects of these post-Katrina years for me to witness is that New Orleans, where I have cultivated my artistic voice, has been cruel to my many Latino immigrant brothers and sisters who were brought in for the rebuilding.

“The city that care forgot” has never officially cared to thank the thousands of Latino immigrant workers who aided the lengthy reconstruction in the days, weeks, months, and years after the monumental devastation in Katrina’s wake.

Immigrant men and women gave of their sweat, blood, and some of their lives to rebuild an ungrateful city that exploited their labor—as easily as it exploited enslaved Africans when “cotton was king”.

This country, like the city of New Orleans, continues to thrive on the exploitation of labor. It is a simple and brutal fact for a democratic nation built on the slavery of Africans and the near genocide of Native Americans.

These are the difficult truths.

The United States of Amnesia does not like to recall its dark eras, and it encourages us to forget that the world’s beacon of freedom has been built on the blood of others.

I refuse to forget, and continuously remind people that it was immigrants who cleaned out and repaired the many hotels to reignite the tourist engines. Their labor allowed the city to declare it was open for business only a month or two after the failure of the federal levees, and the apocalyptic abandonment of its people by the Bush administration.

Immigrants cleaned out the human waste in the Superdome and the Convention Center. Many still remain trying to make a life for themselves and their families in a city that has rendered them invisible at the same time.

Immigrants occupy a parallel universe, working in the shadows of a city and country that exploits their labor and demonizes them simultaneously. Theirs is a bizarre science-fiction reality

Immigrant workers were exposed to diseases in the soiled and contaminated waters of the flooded city, and many workers were forced to gut out houses without proper protective equipment. They were subjugated to abhorrent living conditions where up to fourteen men were housed in a trailer meant for one.

One Honduran young man I interviewed told me how he arrived two weeks after the storm, and witnessed many of his compadres fall to severe illness because of the despicable working and living conditions. He was “housed” in one of those trailers with thirteen other workers. He almost lost his left arm when a dumpster, weighing a tonnage, crushed his left hand and severed it in two, with fingers dangling.

I am willing to hold New Orleans accountable for its historical sins against my African American brothers and sisters, and its recent crimes to my hermanos y hermanas, my resilient immigrant family, who struggle to remain in a city they have reconstructed.

I believe we need to excavate the many hidden truths to fully recover from our collective storm trauma, and only then, will

This was the ubiquitous theme we all adopted as we returned to rebuild our flooded city.

We all need to be counted in a city once known as the first multiracial port of the Hemispheric Americas.