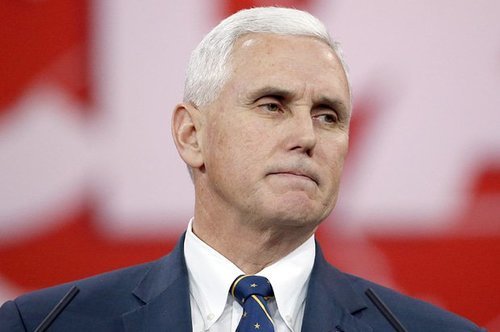 One Old Vet On The Worthlessness Of Mike Pence

Mike Pence: "How much will the Amnesty people pay?"

One Old Vet’s immigration news aggregation site is one of the greatest Patriotic resources on the internet, an imperative daily visit for me and I hope for many others concerned about the fate of America. Once in a rare while OOV is provoked to diverge from the laborious and no doubt sickening task of reading and choosing stories to write a direct editorial comment – the latest I noted last month in Limbaugh, One Old Vet On Amnesty Ploy Scandal. VDARE.com On GOP Scandal Now as a lifelong Indiana resident OOV has written a definitive comment on the current Governor, Mike Pence, responding to Pence and The Revolution: Five reasons he might be the 2016 dark horse to watch by Matt K. Lewis The Daily Caller 9/10/2013

Let me tell you about the Mike Pence I know, and why I don’t trust him when it comes to ILLEGAL immigration and being a man of his word.

A long, long time ago, in a galaxy far, far away, I traveled in pretty heady political circles, enjoying contacts with leaders and candidates of both the GOP and Democrat parties…

On one occasion, at a GOP “mover & shaker” soiree, I had a one-on-one with, then Congressman, Mike Pence. Pence had just announced his “No Amnesty” amnesty as a counter to the 2006 Kennedy-McCain amnesty bill…

In May of this year Mike Pence signed into Indiana law a bill that provides in-state tuition for ILLEGAL aliens. We can expect more of the same hispandering and semantic game playing from him that we’ve seen from other RINOS like Graham, McCain and Rubio.

Apart from being an Indiana resident One Old Vet spends I estimate 10-12 hours a day reading immigration news. He is an expert and knows what he is talking about.

The Pence plan was an early case of ADD, with the money being offered by heiress Helen Krieble. I stand by what I said then in  Help! Helen Krieble's Horse Farm Workers Want To Be Paid Too Much!

The fact is Helen Krieble is a fully accredited member of the Cheap Labor Lobby, her plan is a fraud, and Mike Pence is a contemptible disgrace.