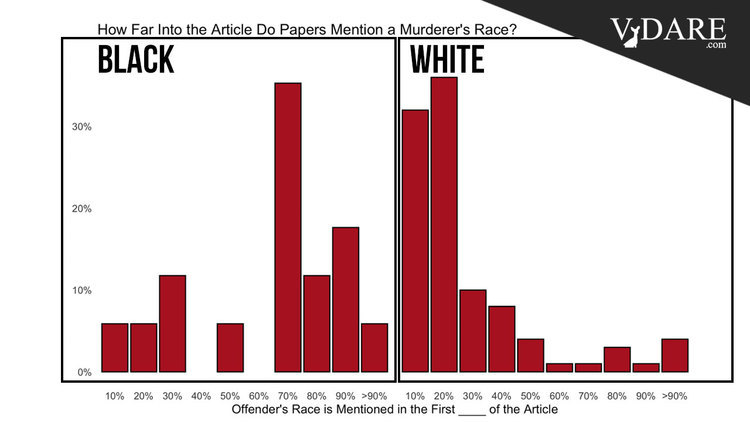 Yes, Newspapers Bury The Race Of Black Murderers Toward The End Of The Story

Earlier by Steve Sailer (2018): Let's Play "Count the Paragraphs" Until the NYT Finally Lets Slip the Ethnicity of the Murderer

From the Washington Free Beacon, a quantitative analysis confirming my perception that prestigious newspapers tend to bury Counter-Narrative facts late in their articles:

Yes, the Media Bury the Race of Murderers—If They’re Not White

Charles Fain Lehman is a fellow at the Manhattan Institute and a contributing editor of City Journal .

Frank James, the man arrested for Tuesday's New York City subway shooting, is a black nationalist and outspoken racist who railed against whites, Jews, and Hispanics. A careful reader of the New York Times could be forgiven for overlooking that. In a nearly 2,000-word article on the attack, James's race is not mentioned. The same is true for the coverage offered up by Reuters; the Washington Post only mentioned James's race in relation to his condemnation of training programs for "low-income Black youths."

Media critics on the right say that the conspicuous omission of James's race from these news reports illustrates a trend among prestige papers, which deemphasize or omit the race of non-white criminals while playing up the race of white offenders. But is it a real pattern?

Yes. A Washington Free Beacon review of hundreds of articles published by major papers over a span of two years finds that papers downplay the race of non-white offenders, mentioning their race much later in articles than they do for white offenders. These papers are also three to four times more likely to mention an offender's race at all if he is white, a disparity that grew in the wake of George Floyd's death in 2020 and the protests that followed.

The Free Beacon collected data on nearly 1,100 articles about homicides from six major papers, all written between 2019 and 2021. Those papers included the Chicago Tribune, Los Angeles Times, New York Times, Philadelphia Inquirer, San Francisco Chronicle, and Minneapolis's Star-Tribune—representatives of each paper did not return requests for comment for this article. For each article, we collected the offender's and victim's name and race, and noted where in the article the offender's race was mentioned, if at all. So, in the great majority of times when the newspapers get around to mentioning that the killer is black, they bury it in the second half of the article. But, when they mention the killer is white, it’s much more likely to be upfront: This article has lots more interesting information like this.

For future research, let me suggest tightly focused statistical analyses such as on police shootings for making good apples to apples comparisons. My prediction is that police shootings in which a black civilian is killed by a white cop are likely to get much more national coverage than when a white civilian is killed by a black cop and newspapers are more likely to emphasize photos of the two participants when their story conforms to The Narrative than when it subverts The Narrative.

Another interesting question is trying to figure out how much the media’s tendency to splash stories of whites killing blacks while downplaying the more numerous stories of blacks killing whites is due to racial animus vs. the news media’s Man Bites Dog impetus to feature interesting unusual stories rather than boring commonplace stories? Did the current racial hate orgy start out as just Man Bites Dog stories and then the media forgot that they were Man Bites Dog stories and came to believe they were representative? When there is a near total shutdown on mentioning the basic national murder statistics by race, I guess it wouldn’t be too hard to eventually come to believe your own headlines, even if you work in the room where the sausage is made.