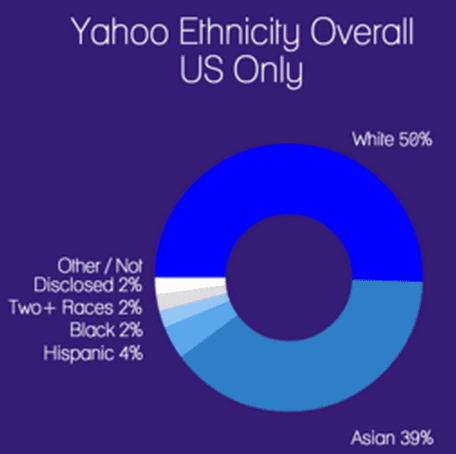 Another big Internet company releases diversity statistics about the makeup of its workforce and the numbers recount a familiar tale that applies to the rest of Silicon Valley.

So why does the “mostly white” meme persist about tech companies? I think it’s because those who are obsessed with diversity for diversity’s sake have a hard time reconciling one very inconvenient truth: If you want to equalize the races—be your concern tech companies or colleges, the two places this argument seems to pop up more than anywhere else—you must do so at the expense of Asian Americans. Rather than saying “Ugh, these institutions are disproportionately Asian,” the diversity set says “Wow, these places are mostly white!” While accurate(ish), this kind of dodges the question, doesn’t it? Because it’s not so much the proportion of white folks as the proportion of black and hispanic folks that concerns them. It’s no fun for the diversifier to say “Geez, we need fewer Asians at these institutions to make way for blacks and hispanics.” Forcing them to acknowledge the costs—more blacks and hispanics means fewer Asians, if proportion is all that matters—creates a serious mental tension. That mental tension leads to a mental block. And that mental block leads to the brain spitting out the following formulation: “These companies are mostly white!”

Cognitive dissonance. It’s a hell of a drug.

I’d add that anti-whiteism is the KKKrazy Glue that holds together the naturally fractious Obama Coalition. Only by stoking hatred of demons can it paper over its own divisions.

Of course, most of the ambitious, clever, and powerful people in America are white, so they’ve been brainstorming creatively about how they can achieve Victimhood rather than be stuck along with Mitt Romney as last White Persons Standing in this game of musical chairs.

The Obama Coalition has zero intention of alienating the bulk of the most ferocious white social-climbers, so it is extremely accepting of white people redefining themselves as oppressed minority victims of ever smaller definitions of the Real Bad Guys.

Is Sheryl Strandberg of Facebook white? Well, you are missing the point: she’s a woman and thus, by definition oppressed! Gay? Come on over! If all else fails, you can put on a Hillary Clinton-style pantsuit and declare yourself Trans.

The genius of this is that it constantly recruits new whites who have a personal career interest in demonizing and dividing the white majority.