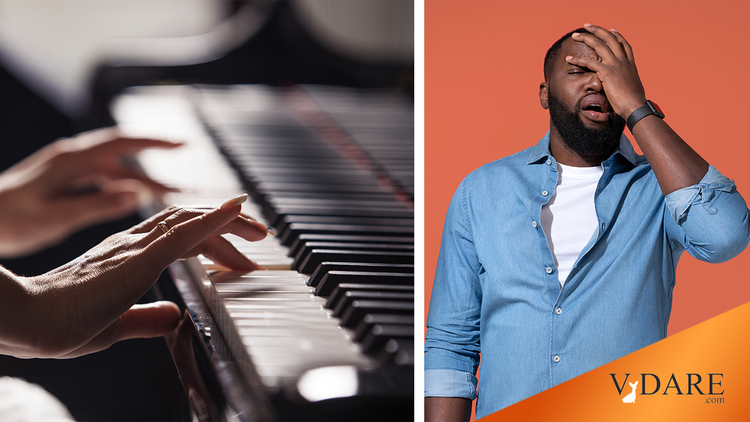 WP & NYT: Because Blacks Tend to be Bored by Classical Music, They Should be Paid to Play It

Data collected from 500 American orchestras for a 2016 study by the League of American Orchestras paints a starkly white picture when it comes to diversity in classical organizations. Its key finding: the “proportion of nonwhite musicians represented in the orchestra workforce — and of African American and Hispanic/Latino musicians in particular — remains extremely low.”

The proportion of Hispanic and Latino musicians grew from just 1.8 percent in 2002 to 2.5 percent in 2014; while over the same 12-year period, the proportion of black musicians languished at around 1.8 percent. Meanwhile, since 2010, when the league started examining organizational metrics, the percentage of nonwhite staff of American orchestras has hovered at around 14 percent, with black staff accounting for just 5 to 7 percent. And between 2010 and 2016, black conductors and music directors have accounted for just 2 to 6 percent of the field.

If ensembles are to reflect the communities they serve, the audition process should take into account race, gender and other factors.

… Blind auditions, as they became known, proved transformative. The percentage of women in orchestras, which hovered under 6 percent in 1970, grew. Today, women make up a third of the Boston Symphony Orchestra, and they are half the New York Philharmonic. Blind auditions changed the face of American orchestras.

American orchestras remain among the nation’s least racially diverse institutions, especially in regard to Black and Latino artists. In a 2014 study, only 1.8 percent of the players in top ensembles were Black; just 2.5 percent were Latino. At the time of the Philharmonic’s 1969 discrimination case, it had one Black player, the first it ever hired: Sanford Allen, a violinist. Today, in a city that is a quarter Black, just one out of 106 full-time players is Black: Anthony McGill, the principal clarinet.