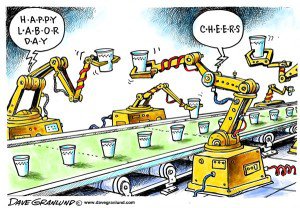 Labor Day 2015 is not a hopeful occasion for American workers, given the changing workplace where humans are becoming less needed because of smart machines.

CBS News had a sobering report on Saturday about technological unemployment. NYU Professor Gary Marcus remarked, “Eventually I think most jobs will be replaced, like 75 or 80 percent of the people are not going to work for a living.”

How an economy or society could work based on 80 percent unemployment has not been sorted out. Fortunately the state of mega-joblessness based on unstoppable technology is decades in the future, although we are feeling the initial effects now in the jobless recovery. A 2013 examination done by the Associated Press found that much of the failure of the jobs economy is due to the increasing use of automation, robots and computers to perform the tasks formerly done by humans:

Most of the jobs will never return, and millions more are likely to vanish as well, say experts who study the labor market. What’s more, these jobs aren’t just being lost to China and other developing countries, and they aren’t just factory work. Increasingly, jobs are disappearing in the service sector, home to two-thirds of all workers.

They’re being obliterated by technology.

Year after year, the software that runs computers and an array of other machines and devices becomes more sophisticated and powerful and capable of doing more efficiently tasks that humans have always done. For decades, science fiction warned of a future when we would be architects of our own obsolescence, replaced by our machines; an Associated Press analysis finds that the future has arrived.

“The jobs that are going away aren’t coming back,” says Andrew McAfee, principal research scientist at the Center for Digital Business at the Massachusetts Institute of Technology and co-author of “Race Against the Machine.” '’I have never seen a period where computers demonstrated as many skills and abilities as they have over the past seven years.”

Robots are becoming more attractive to small manufacturers because of their decreasing cost. Baxter the robot (pictured) costs around $22,000 and doesn’t need sleep or lunch breaks.

Jerry Kaplan (recently interviewed by Paul Solman) is author of the just released Humans Need Not Apply: A Guide to Wealth and Work in the Age of Artificial Intelligence. Kaplan pointed out in the CBS piece that self-driving cars and trucks could put three million professional drivers out of work. And that’s just one industry.

It’s clear that America does not need to import millions of immigrant workers because of a mythical future labor shortage; the automation revolution in the workplace changes all that.

But hardly anyone in Washington is paying attention — why not?

Earlier this year, there were reports on advances in artificial intelligence. Stephen Hawking, Elon Musk and others voiced their concerns about computers overtaking humans, and it could start in the workplace, CBS News’ Anthony Mason reports.

“Eventually I think most jobs will be replaced, like 75 percent, 80 percent of people are probably not going to work for a living,” New York University’s Gary Marcus told Mason earlier this year.

Jerry Kaplan is author of the just-released “Humans Need Not Apply: A Guide to Wealth and Work in the Age of Artificial Intelligence.”

“The new coming wave of automation is blind to the color of your collar,” Kaplan said.

Kaplan said that in the next decade or two, driverless cars could put many of the more than three million licensed professional drivers around the country out of work. While automation long ago revolutionized the assembly line, advances in big data computing power could soon downsize the traditional white collar workforce as well.

“Even what you think of as advanced professions that require a great deal of specialization and expertise, the vast majority of the work is routine, and it’s those routine tasks which can be now taken over by computers, so that what used to take the work of 20 lawyers may be done by five lawyers, or 20 doctors may be done by five doctors,” Kaplan said.

Maybe even journalists. Now computers are creeping into the reporting field. At The Associated Press, approximately 4,000 corporate earning stories are being written by computers.

“Well, at one time, like when I first got to the AP, we were writing as many as 1,000 earning stories a quarter,” AP assistant business editor Philana Patterson said. “I think everybody knows the media industry has been contracting and we don’t have as many people working in the newsroom. We eventually got that down to about 300 earning stories a quarter. So we were offering our customers less, and with automation we were able to actually bring those numbers up above what we were doing before.”

“We can generate millions of stories in a matter of minutes or hours,” Automated Insights CEO Robbie Allen said.

Wordsmith takes raw data, like a player’s production for Yahoo’s fantasy football league, and turns it into weekly recap stories that sound like they were written by a human. But Allen downplays the doomsday scenario.

“I believe that our future is going to be much more of a humans and software working together, and to our knowledge nobody’s ever lost a job due to an implementation of Wordsmith,” Allen said. “In fact, most of the time we’re implementing things that previously didn’t exist before.”

“We haven’t eliminated any jobs, and what it’s really done for us is it’s allowed us to give reporters and editors time to do more meaningful work,” said Patterson.

If computers continue to infringe on humans’ territory, what would a mostly jobless population look like?

Marcus said it could lead to dramatic changes.

“I think eventually we’re going to move to a society that works on different principles, where the state supports people, maybe from taxes that come from the people that own most robots,” said Marcus. “They’re going to have a different kind of- almost like a leisure kind of life, but I think more people have come to realize that a guaranteed minimum income from the state really is the endgame here.”