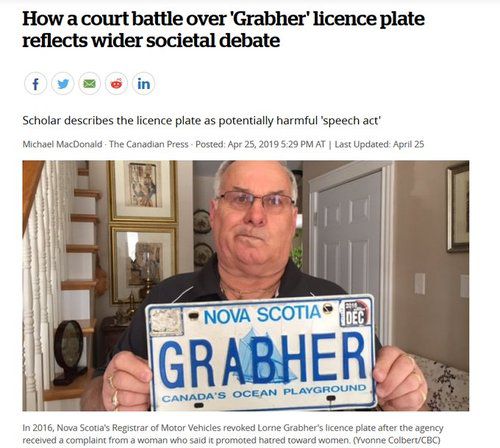 Words Are Violence: Transubstantiation For The 21st Century

One key axiom of the snowflake culture currently holding the academy in its icy grip is that words, spoken or written, can be acts of violence. They don't just suggest, or promote, or incite violence; they are violence. It's like the Doctrine of Transubstantiation, where the eucharist bread and wine don't merely represent Christ, they are Christ.

This idea, that words are actual violence, applies even if the words are spoken by someone strapped into a straitjacket and imprisoned in an iron cage; even if they are written on a slip of paper that is then sealed in a container and dropped into an ocean trench.

Or printed on an automobile license plate. That is the gravamen of a case currently being litigated with much passion in Nova Scotia.

What happened was, a Nova Scotian named Lorne Grabher bought a personalized licence plate for his Dad with the family name on it: GRABHER, G-R-A-B-H-E-R. The name is of respectable German origin. If you break it into two words, though, it looks like "Grab her."

Some woman complained, Nova Scotia's DMV revoked the plate, and Mr Grabher has filed a civil lawsuit to get the plate reinstated.

Expert witness for the DMV this week was one Carrie Rentschler, a professor of Communication Studies. In written testimony Professor Rentschler extruded the following, quote:

The speech act "Grabher" can be located on the continuum of sexual violence, as a form of communication like catcalling, verbal harassment and verbal threats of gender violence.

The Mrs and I were in Nova Scotia four years ago, and we liked the place very much.

I'm trying to decide whether I like it less now, or more: less, because the court system of the province has given hospitality to a honking poseur like Prof. Rentschler, or more, because life in Nova Scotia is so uneventfully law-abiding, the courts can give over their time to these lunatic extremes of snowflakery.