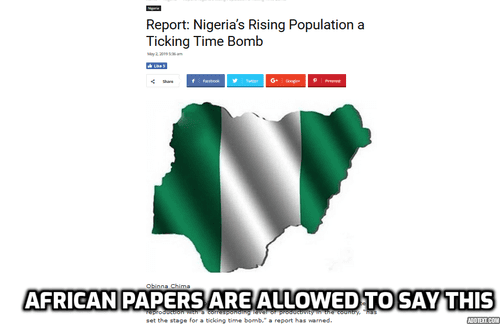 From This Day of Lagos:

The failure by policymakers in Nigeria to match the rising rate of reproduction with a corresponding level of productivity in the country, “has set the stage for a ticking time bomb,” a report has warned.

While Nigeria recorded Gross Domestic Product (GDP) growth of 1.93 per cent in 2018, the country’s population growth rate is currently at about three per cent.

In fact, the United Nations Population Fund (UNFPA) on Monday stated that Nigeria’s population currently stands at an all-time high of 201 million, representing an increase of 5.1 million from the 195.9 million it said the country had in October last year.

The UNFPA in its 2019 State of the World Population report published on its website, had said the country’s annual growth rate has been at an average of 2.6 per cent from 2010 to 2019. …

“According to the United Nations Department of Economic and Social Affairs (DESA), Nigeria’s population is set to more than double by 2050 to reach 400 million and overtake the United States as the third most populated country in the world.

… “Nigeria was recently named the poverty capital of the world – overtaking much larger India, projected to rise sharply as the population boom continues without matching economic growth,” it added. …

The latest data from the National Bureau of Statistics also showed the unemployment rate has more than doubled since the end of 2015.

It currently stands at 23.1 per cent compared to 10 cent at the end of 2015. This, the report noted was likely to worsen in the years to come as population growth currently exceeds GDP growth.

“This implies that there are more people being born, and in turn, more people joining the labour force than there are jobs being created,” it stated.

Continuing, the report pointed out that even the highly educated and skilled Nigerians are not left out of the scramble, “to escape the current economic uncertainty for a better life overseas.” “Canada is the new destination of choice due to its liberal immigration policies.”

“Faced with dire employment prospects, Nigerians are fleeing. Many Nigerians have left and are still fleeing the country in search of proverbial greener pastures.”