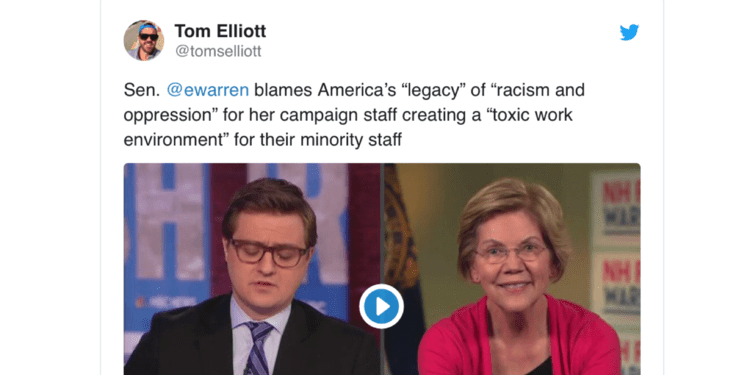 The campaign of former Woman of Color Elizabeth Warren, just like the Buttigieg campaign, is being held hostage by its verklempt Women of Color staffers. From Politico:

Women of color bolt Warren’s Nevada campaign in frustration
“Complaints, comments, advice, and grievances were met with an earnest shake of the head and progressive buzzwords, but not much else.”

A half-dozen women of color have departed Elizabeth Warren’s Nevada campaign in the run-up to the state’s caucuses with complaints of a toxic work environment in which minorities felt tokenized and senior leadership was at loggerheads.

The six staffers have left the roughly 70-person Nevada team since November, during a critical stretch of the race. Three of them said they felt marginalized by the campaign, a situation they said didn’t change or worsened after they took their concerns to their superiors or to human resources staff.

“During the time I was employed with Nevada for Warren, there was definitely something wrong with the culture,” said Megan Lewis, a field organizer who joined the campaign in May and departed in December. “I filed a complaint with HR, but the follow-up I received left me feeling as though I needed to make myself smaller or change who I was to fit into the office culture.”

Another recently departed staffer, also a field organizer, granted anonymity because she feared reprisal, echoed that sentiment. “I felt like a problem — like I was there to literally bring color into the space but not the knowledge and voice that comes with it,” she said in an interview. …

She said she felt compelled to speak out because she believed the campaign’s internal systems failed and needed to be fixed. Too often, Lewis said, such problems are ignored or swept under the rug because people fear damaging the larger cause.

“Every election will always be the most important election of our lifetimes,” Lewis said. “Organizing culture needs to change because the fact is our well-being is more important than any election. I hope this starts a conversation that helps facilitate personal reflection about ways we can change campaign culture.”

Sen. @ewarren blames America’s “legacy” of “racism and oppression” for her campaign staff creating a “toxic work environment” for their minority staff pic.twitter.com/yf29uW10l7