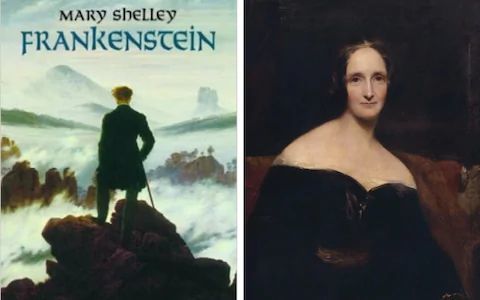 At the Times Literary Supplement, Michael Caines reproduces a list drawn up in 1898 by a prominent man of letters named Clement K. Shorter of the 100 best novels of all time.

"He doesn't explain what exactly makes a book one of the "best", only that he has deliberately limited himself to one novel per novelist. Living authors are excluded ..."

The list is biased toward the British Isles, tending to overlook American books (such as Moby-Dick and The Red Badge of Courage), but has a smattering of Continental novels.

And of course women writers were totally ignored in 1898. Back then, women were kept illiterate and chained to the stove so no women could read novels, much less write them. And if they did, no male critic would praise them.

In fact, 31% of this Victorian gentleman's choices of the 100 best novelists no longer living are female. Here's Mr. Shorter's list, with female novelists in pink:

My potted history of the novel would roughly be that what are now recognized in hindsight as early novels tend to be somewhat isolated tour d'forces by male pioneers like Cervantes and Defoe. It wasn't clear before the second half of the 18th century if the novel was a permanent type of writing.

But, in the 1740s Samuel Richardson discovered with Pamela and Clarissa that there was a large market for books about women, and presumably read heavily by women, and from then on the novel was definitely a thing. Fairly quickly, women novelists emerged and earned a sizable share of the commercial market by the 1770s.

In general, female novelists tended to be less stylistically innovative or ambitious, and got less critical respect. Dr. Johnson, for example, would grump to Boswell about how much money Mrs. Burney was making, but also confess to having stayed up all night reading her latest page-turner.

The undisputed best of the first couple of generations of women novelists, Jane Austen, was a bestselling writer toward the end of her short life, with a major fan in the Prince Regent. After her death in her early forties, interest inevitably faded, but her reputation was kept alive, although not by critics and scholars, but by subsequent great writers such as Charles Dickens who frequently mentioned his large debt to her books. A recent computer study of word patterns in English literature found that the two most influential writers after Shakespeare were Austen and Sir Walter Scott.

(By the way, I'm becoming interested in Scott as a political-historical thinker on ethnic conflict, such as between Scottish Highlanders and the English and between the Normans and the Saxons. Any recommendations for the most accessible of Scott's books along those lines?)

In general, I'd say that the male writers on Mr. Shorter's list are, from the perspective of 2013, on average more distinguished than the female writers. This would be another example of the common phenomenon of the male sex having a larger right tail of whatever bell curve you are looking at than the female sex. But the effect is not overwhelming.

The 1898 list also adds 8 novels by living writers (e.g., Tolstoy, Hardy, Henry James, and Zola), none of them women. That's a tiny sample size, but I suspect that it's possible that women novelists subsequently faded in literary importance for awhile during the stylistically innovative late 19th and early 20th centuries.