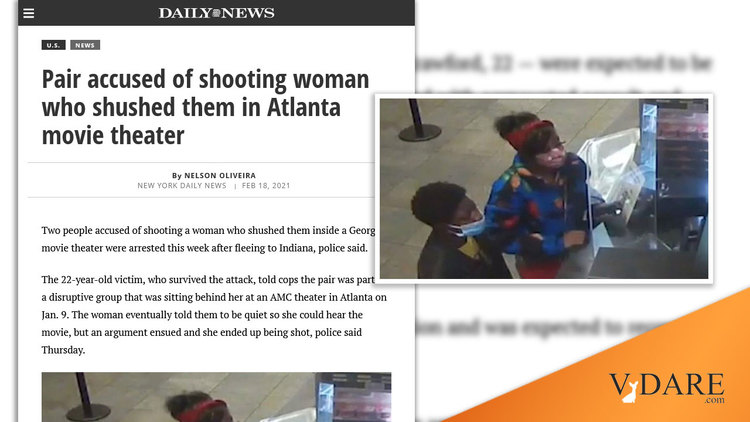 Two blacks, a man and a woman named Camryn King, 20, and Yvonne Crawford, 22, were arrested after they allegedly shot a woman who tried to shush them in a movie theater:

Two people accused of shooting a woman who shushed them inside a Georgia movie theater were arrested this week after fleeing to Indiana, police said. 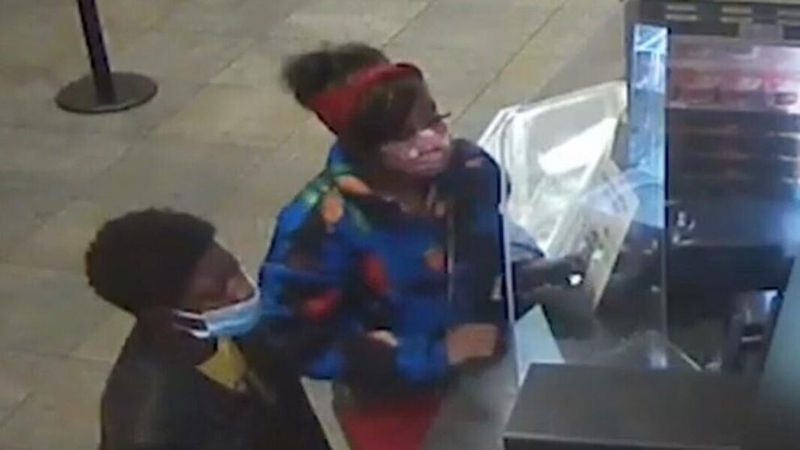 The 22-year-old victim, who survived the attack, told cops the pair was part of a disruptive group that was sitting behind her at an AMC theater in Atlanta on Jan. 9. The woman eventually told them to be quiet so she could hear the movie, but an argument ensued and she ended up being shot, police said Thursday.

There are three points here. One is Lawrence Auster's point that it's dangerous to point out black people's bad behavior, because they can react violently.

An Auster reader proposed an addition to John Derbyshire's rules (from the article that got Derb fired from National Review) for protecting yourself from black violence:

Understand that even a simple, polite admonishment directed at a black may incite a violent response. Weigh this before you ask blacks to pick up their litter, to stop talking during a movie, or to put out cigarettes in a non-smoking area.

Auster responded with long list of other times when it had proved unsafe to rebuke black behavior:

10(l) If you have stopped your car at an intersection and your car is surrounded by a mob of threatening blacks and one of them throws a rock at your car window, do not get out of your car to confront the rock thrower. Stay in your car and drive away as quickly as you can.

10(m) If you see a black man with his baby daughter who is crying incessantly, do not walk up to him and ask him if the child is all right. Mind your own business.

10(n) Do not drive a car in the neighborhood of the University of Southern California unless it is part of a convoy.

10(o) If you see a black man drop a beer bottle or other trash outside your home, do not ask him, even very politely, to pick it up.

10(p) If you are walking along a street, and a car with black males in it almost runs you over, do not yell out, “Hey, watch where you’re going!”

VFR’s Rules on How to Protect Yourself from Black Violence and White Political Correctness , May 22, 2012

Of course, there's also the point that blacks have a different cultural idea of what constitutes good movie theater etiquette than whites do:

If you are a Non-Black Person and you are planning to see a film at a movie theater near an “urban” part of town, you should find an open flame and toss your movie tickets into it, because you are not paying to watch a movie, you are paying to listen to Black People provide their own personal audio commentary throughout the entire movie.

The final point here is that since the victim survived—due to good medical care or bad marksmanship—she's not being named for privacy reason. And thus, we don't know what color she is.

We haven't officially been told that Camryn King  and Yvonne Crawford are black, but we can see them. We can't see the victim, and thus the press may have, in this case, suppressed what would be an obvious anti-white hate crime.

We do know that when a white person does anything to a black person, the case, and the races involved, becomes national news.