Will Republicans Compete on Enforcement Toughness?

Is American sovereignty finally appearing as an important topic in the Presidential campaign?

Law and borders have been given short shrift in earlier Presidential elections because both parties have constituencies that favor permissive immigration enforcement: Republican elites like cheap labor and Democrat honchos believe that importing millions of big-government foreigners will bring a permanent liberal majority.

But the emergence of the Tea Party has changed the game. Grassroots conservatives across America are politically engaged to fix what’s wrong with the country — and that includes immigration anarchy. They demanded better governance in local townhall meetings last year and voted in a Republican House in 2010 with dozens of Tea Party-identified members, pledged to cut spending and rein in government. 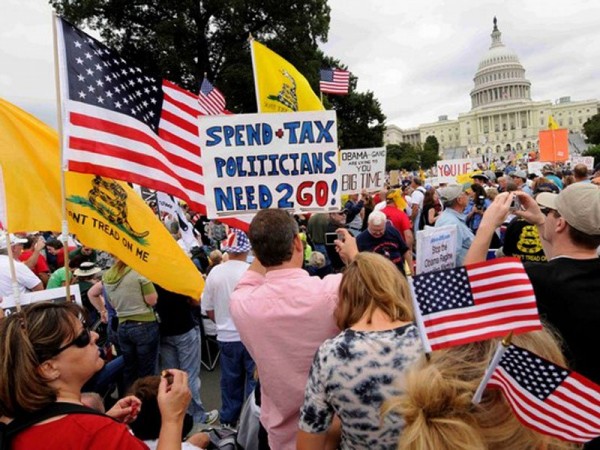 According to the Washington Post, Republican candidates are hearing from many citizens voicing concerns about border security and immigration enforcement:

KEENE, N.H. — Mitt Romney opened his town hall meeting here talking about the economy — his thoughts on growing business, getting government out of the way — just as he does nearly every other campaign event. But when he opened last week’s forum for questions, the first voter he called on didn’t seem concerned about any of that. He wanted to know the Republican presidential candidate’s stance on border security.

A similar scene played out in South Carolina a few days later, when Rep. Michele Bachmann (R-Minn.) attended a town hall meeting she assumed would center on the economy, jobs and the federal deficit — only to see the assembled voters react most passionately to her comments on illegal immigration.

Polls may not suggest it, and the candidates may not be catering to it, but immigration is an issue that voters won’t let the GOP White House hopefuls escape. [. . .]

Texas Governor Rick Perry (immigration enforcement grade D-) must not have gotten the memo, since he remarked to a New Hampshire audience on Saturday, “No, I don’t support a fence on the border.” Even the Associated Press noted the negative reaction to his impolitic answer.

Unlike Rick Perry, however, Mitt Romney has taken the hint from what citizens say is important to them. Listening to voters — how radical!

(You can hear Mitt Romney interviewed on the John and Ken radio show on Feb 1, 2008 which illustrates his intellectual grasp of the illegal immigration topic.)

TAMPA — With Rick Perry proving to be a serious threat to Mitt Romney’s presidential campaign, the former Massachusetts governor swung through Tampa on Friday to exploit what some Republicans see as Perry’s Achilles’ heel: immigration.

“We must stop providing the incentives that promote illegal immigration,” Romney told more than 100 people attending a Republican Hispanic conference. “As governor, I vetoed legislation that would have provided in-state tuition rates to illegal immigrants and I strengthened the authority our state troopers had to enforce existing immigration laws.”

Romney, 64, never mentioned by name the Texas governor, who leads Romney in most national polls as well as in early primary and caucus states. But immigration is a new issue of focus for Romney this election cycle, and his campaign knows Perry, 61, is already facing criticism from conservatives for not taking a hard-enough line.

For instance, in 2001 Perry signed a version of the DREAM Act that made Texas the first state to allow in-state tuition to undocumented immigrants — much like the bill Romney boasted of killing in Massachusetts.

Last year, Perry said he had no interest in passing a tough Arizona-style immigration law for his border state. He also has questioned the effectiveness of building a massive border fence, something Romney said Friday should be a priority.

Illegal immigration remains a hot-button issue among Republican activists, but leaders in Texas — where 38 percent of the population is Hispanic — have tended to take a more moderate approach to the issue.

“As governor of Texas, a state that has more than 1,200 miles of border with Mexico, Gov. Perry understands first-hand the need to secure our border, something the federal government has failed at,” said Perry campaign spokesman Mark Miner. “Because of the federal government’s inaction, Texas has spent more than $400 million on border security since 2005. Before you discuss comprehensive immigration reform, the border has to be secured.”

Tough talk on immigration can backfire in states like Florida, where Hispanics are heavily courted swing voters, if the rhetoric comes off too harsh. Romney took a hard line on immigration in 2008 and wound up winning just 9 percent of the Cuban vote and 21 percent of the non-Cuban Hispanic vote in Florida’s Republican primary. Arizona Sen. John McCain won 54 percent and 53 percent respectively, and won Florida’s primary.

Speaking Friday to the Republican National Hispanic Assembly, Romney was careful to differentiate between immigrants and illegal immigrants. “I am a great proponent of legal immigration. Many of you are living proof of the unique strength of America that is constantly renewed by new Americans,” Romney said, arguing that Republicans should do a better job winning over Hispanic voters.

“The Republican Party is the party where Hispanic citizens should reside. Our party is the place where their values and their aspirations will be fulfilled. The other party has a good pitch, but not a good delivery,” Romney said. “President [Barack] Obama and his party are about handouts and welfare and the redistribution of wealth. That is not what brought us to these shores. Our party is about freedom and opportunity.”

Romney was enthusiastically received, but not nearly as much as underdog Republican candidate Herman Cain, who spoke several hours later and drew repeated standing ovations.

After a speech in which he criticized Obama as inept and a threat to America’s freedom, Cain was vague about his views on the DREAM Act. It should be up to states to decide, Cain said.

After his speech at Tampa’s Grand Hyatt hotel, Romney traded his suit and tie for jeans and an open-collar Brooks Brothers shirt to greet supporters and officially open his statewide headquarters. He noted that he was just across the river from where he hopes to accept the Republican nomination a year from now.

“Florida’s huge,” Romney said, referring to the significance of Florida’s primary expected to be early next year. “I think probably you will be the state that sets the final compass”