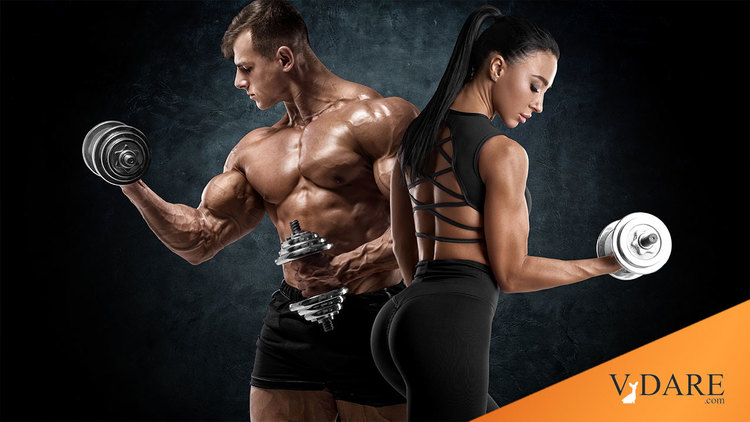 I suppose this is part of the reason why I doubt these anecdotes. I've heard the "anti-woke" misrepresent the "woke" positions on gender, sex, race etc. so many times that it seems like they just misunderstand a lot.https://t.co/Hp3NrAn3ca

Way back in 1997, I invented citing Olympic stats to debunk the then conventional wisdom that women would catch up to men in noncontact sports like running real soon now, so I’m very interested in this case study of extraordinary popular delusions and the madness of elites.

That women athletes were about to catch up with men was a widespread belief among academics and the public a quarter of a century ago, although that has been memory-holed. A 1996 poll found that 66% of Americans believed top women athletes would catch up to top men in the not too distant future. Various scientific journals published charts showing that women had consistently narrowed the gap in running times, at least up through the 1988 Olympics, so if the trends continued, they’d disappear by the early 21st century.

Common Feminist Fallacies of the Past like this get rapidly forgotten because they don’t fit into the overarching narrative that society was incredibly racist and sexist until, roughly, last week.

Well, that didn’t happen, in sizable part because the East German women’s Olympic team doping-industrial complex collapsed in 1989, at the same time, steroid testing was toughened after the spectacular Ben “Benoid” Johnson doping scandal in the 1988 Olympics’ 100m dash final.

Women tend to get more bang for their buck from a given dose of artificial male hormones (having 90% less real male hormones to start with), so women runners, such as 1988 superstar Flo-Jo, could set records and stay under the old limits while her mentor Benoid had to take so much to set new records that his eyeballs turned yellow and he got caught.

Also, from 1997 onward, I set about monomaniacally debunking this popular idea in every forum available. For example, here’s my review of the 2000 book The Frailty Myth: Women Approaching Physical Equality by one-time bestselling feminist author Colette Dowling, whose publisher’s blurb reads:

Can women be equal to men as long as men are physically stronger? And are men, in fact, stronger? … It is Dowling’s controversial thesis that women succumb to societal pressures to appear weak in order to seem more “feminine.” …

Yet as breakthroughs among elite women athletes grow more and more astounding, it begins to appear that strength and physical skill–for all women–is only a matter of learning and training.

That’s phrased in such a way as to suggest that the author is daring, but everybody will be agreeing real soon now.

I so assiduously pointed out the alternative doping theory that eventually writers planning a piece on how women athletes would be equaling men real soon now were dissuaded after they did a little Googling and discovered that this Sailer guy would eat their lunch. So elites somewhat quieted down on this longtime feminist talking point.

For example, the gender gap narrowed suspiciously in running at the 2021 Olympics. It’s almost as if the suspension of drug testing during the pandemic allowed performance-enhancing drug users to performance-enhance like crazy. As iSteve commenter prime noticer noticed:

The magic yam harvest was especially good this year in Jamaica, causing the women to turn in the least plausible results of all time. Old women and literal mothers in their 30s getting faster (and getting braces [a tell-tale sign of Human Growth Hormone use changing the shape of their skulls in the style of Barry Bonds]), sweeping the medals, running 10.7 with ease into a negative wind, even 10.6 (who was the last woman to run this fast…oh right [Flo-Jo]), and most preposterous – the third Jamaican came in 0.15 seconds ahead of the fourth place runner. What? In an Olympic final?

But this wasn’t as much celebrated as a triumph of women as it would have been in the 1980s.

One reason is because the Olympics have faded in popularity since the end of the Cold War. NBC does a great job broadcasting them, but they’re not exactly The Miracle on Ice anymore.

Another is because American women haven’t been all that great since 2000 Olympic heroine Marion Jones got sent to prison in 2005 for lying about steroid use, after which Jamaica (which would not imprison a national hero or heroine) surged to number one in sprinting. America doesn’t see Jamaica as a rival and Americans find Jamaicans likable, so Jamaicans beating Americans in a sport Americans don’t care much about anymore is okay.

And experts know that sprint success is largely about race and doping, neither of which anybody wants to hear about, so don’t push theories that anti-Wokes in the comments will crush with stats dredged up by Steve Sailer.

On the other hand, ignorant children come along all the time who believe their lectures on how totally sexist everybody was until last Monday, so the Woke masses logically assume that the only possible explanation for why men are better athletes than women is because of Social Construction. After all, what other reason is possible?

Add to these venerable feminist talking points the now all-conquering trans dogmas, and of course today’s youth automatically believe in the dumb ideas of the Anita Hill Era. As I wrote in 2000:

Some scholars worry that if we deny the existence of fundamental biological advantages for male athletes, then we have no logical long-term justification for the sexually segregated sports that are such a boon to modern female athletes. They fear that if the Olympics were to replace women-only events with gender-neutral competitions restricted merely to smaller entrants from either sex, then women athletes would simply disappear from the world stage. Stephen Seiler (no relation to this reporter), an assistant professor of sports physiology at Norway’s Agder U., says, “Mixed gender competitions would just not be fair.”

But worrying about fairness to women is so 21-years-ago. Today, we care about ex-men most of all. To point out that women can’t fairly compete men is to be transphobic in an era when the highest possible cultural priority is to indulge ex-men in whatever the hell they feel like doing. For example, from the Daily Penn college newspaper:

The Austin, Texas native is a senior freestyler and has been blowing her competition — and Penn’s record books — out of the water. Continuing an already dominant season, Thomas competed at the Zippy Invitational in Akron, Ohio this weekend and won the 200-yard freestyle with a time of 1:41.93, a time that was good enough to set school, pool, and program records and marked the fastest in the nation this season.

This result came a day after winning the 500-yard freestyle preliminaries by a whopping 14.39 seconds. …

For Thomas’ first two seasons at Penn, she competed on the men’s team, most recently in November 2019, where she also achieved great success. She qualified for the Ivy League Championships in the 500 free, 1000 free, and 1650 free in her 2018 and 2019 seasons, finishing second overall in each event in 2019.

Editor’s Note: The headline and the text of this story have been updated to increase sensitivity.

If Russia or, perhaps, China were to crush America in the Olympics by employing ex-men, it might draw adverse comment in the American press. But both great power rivals are increasingly shying away from American gender insanity as the most obvious way to appeal to normal sane human beings, so it’s unlikely they’d stoop that low.

On the other hand, Iran has a long history of pushing male homosexuals to undergo sexual reassignment mutilation, so it’s possible that at some point the mullahs will push ex-men to Olympic gold.

But southwest Asians don’t have a strong record in the Olympics, so that remains speculative at present.