Will Anyone Have The Nerve To Tell "Dr. Jill" Biden To Stop Insisting On Her Comic Title?

Earlier: Biden's Low IQ: How Dumb Is He? Everyone Should Be Starting To Notice! 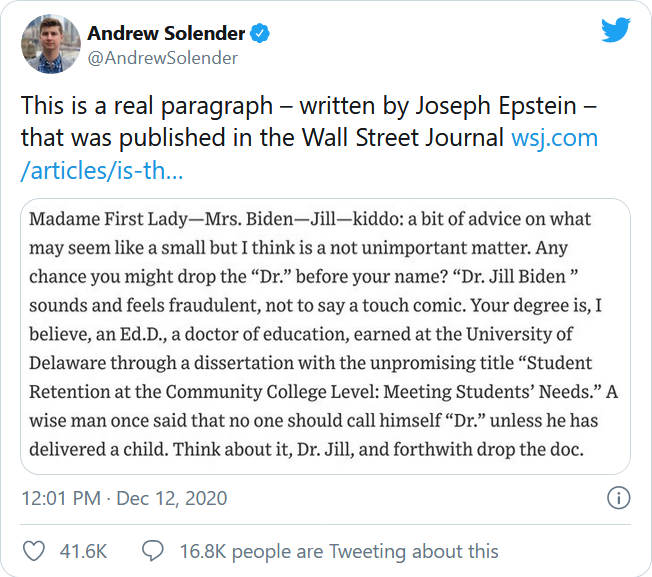 Personally, I kind of like using honorifics for people. It adds a little color to life: e.g., I might write “Even Sir Mick has admitted that his lyrics for ‘Brown Sugar’ might be …”

But insisting that other people call you Doctor, especially when you got a doctorate in Education (which 95% of the time is just a way to pad your pay from the public school district), is pretty tacky.

Mick Jagger, I’m guessing, doesn’t stop people who say “Mr. Jagger, may I have your autograph” and tell them, “Address me only as ‘Sir Mick:’ I have been knighted by Her Majesty.” Or maybe he does. Who knows?

In general, the Bidens seem like people of run-of-the-mill IQs (e.g., Beau, the late Good Son, failed the admittedly tough Delaware bar exam three times) who are insecure about their merely normal brainpower, and overreact embarrassingly. Thus, this incident on the campaign trail in 1987:

For the facts, see:

In his statement today, Mr. Biden, who attended the Syracuse College of Law and graduated 76th in a class of 85, acknowledged: ”I did not graduate in the top half of my class at law school and my recollection of this was inaccurate.”

”With regard to my being the outstanding student in the political science department,” the statement went on. ”My name was put up for that award by David Ingersoll, who is still at the University of Delaware.”

In the Sunday interview, Mr. Biden said of his claim that he went to school on full academic scholarship: ”My recollection is – and I’d have to confirm this – but I don’t recall paying any money to go to law school.” Newsweek said Mr. Biden had gone to Syracuse ”on half scholarship based on financial need.”

In his statement today, Mr. Biden did not directly dispute this, but said he received a scholarship from the Syracuse University College of Law ”based in part on academics” as well as a grant from the Higher Education Scholarship Fund of the state of Delaware. He said the law school ”arranged for my first year’s room and board by placing me as an assistant resident adviser in the undergraduate school.”

As for the moot court competition, Mr. Biden said he had won such a competition, with a partner, in Kingston, Ontario, on Dec. 12, 1967.

Mr. Biden acknowledged that in the testy exchange in New Hampshire, he had lost his temper. ”I exaggerate when I’m angry,” Mr. Biden said, ”but I’ve never gone around telling people things that aren’t true about me.” Mr. Biden’s questioner had made the query in a mild tone, but provoked an explosive response from Mr. Biden.