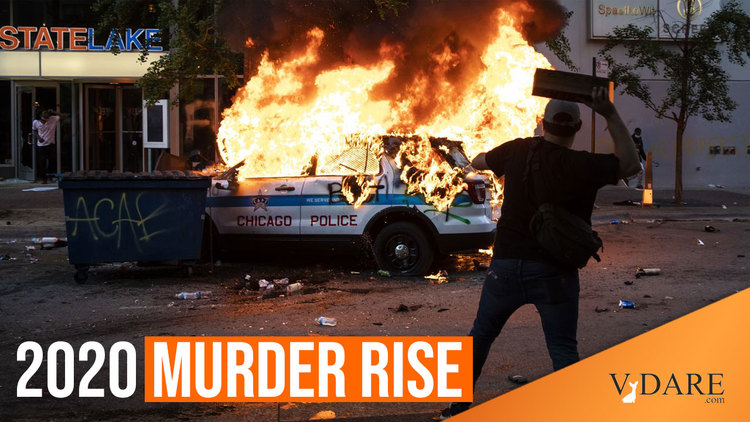 Did the BLM Protests Against the Police Lead to the 2020 Spike in Homicides?

Wilfred Reilly is an associate professor of Political Science at Kentucky State University. His most recent book is Taboo: Ten Facts You Can’t Talk About. You can follow him on Twitter at @will_da_beast630.

I reviewed Professor Reilly’s 2019 book Hate Crime Hoax: How the Left Is Selling a Fake Race War in 2019.

Serious crime, particularly murder, soared while everyone was supposed to be locked indoors. Between 2019—by no means a famously peaceful year—and 2020, homicides alone surged by 42 percent during the summer and 34 percent during the fall. Many politically acceptable explanations have been advanced for this, with left-leaning publications like Vox preferring to focus on the undeniable economic devastation wrought by the COVID-19 pandemic. However, an alternative explanation fits the data far better: crime increased because major police departments had their budgets slashed and reeled in their stops dramatically—and similar chaos has followed such “woke” policy moves nearly every time they have been implemented....

This finding gels perfectly with recent history. The increase in murders from roughly 14,000 in 2014 to 17,294 in 2017, following the first wave of Black Lives Matter-associated riots and the resulting police pullback, gained international attention as the “Ferguson Effect.” More broadly, US murders jumped from 8,530 in 1962 to 24,700 in 1991, following a generation or two of criminal justice reforms including the Miranda and Escobedo protocols, the Fruit of the Poisoned Tree doctrine, and a general liberalization of sentencing policies.