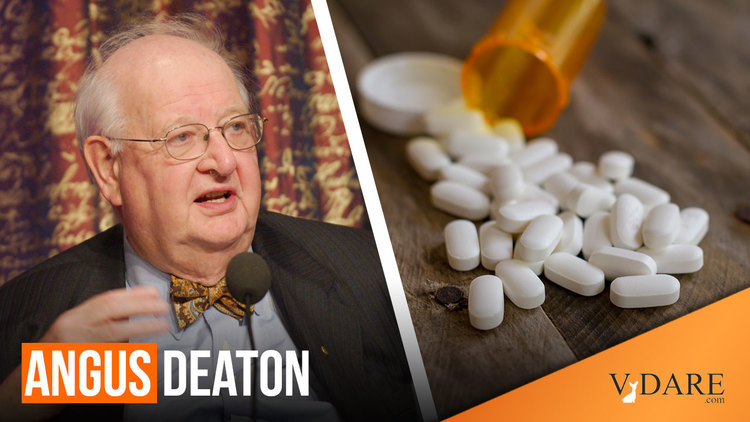 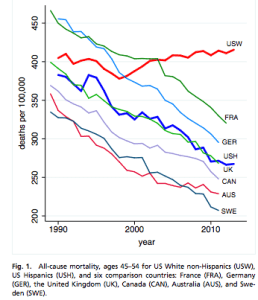 The majority of the ongoing increase in death rates among 45-54 year old whites happened around 1999-2002. But nobody much noticed that it had happened until 13 years later on October 29, 2015, when the husband-wife team of Angus Deaton and Ann Case published a paper on it.

Well, first, everybody might well have gone on ignoring this if Deaton hadn’t won the quasi-Nobel in economics a few weeks earlier.

Second, it took a certain amount of work to extract the numbers from the CDC’s annual report on “Deaths.” I’ve worked a lot with the equivalent annual report on “Births.” Some trends are graphed by the government, some are displayed in tables, but some have to be laboriously constructed by the end user from different reports. I’m guessing that Deaton and Case had to construct the red line in this graph at left from separate annual reports.

Third, and most important, there are virtually no respectable organizations that have it as part of their mission to care about the well-being of whites. In contrast, there are countless organizations scanning for statistics showing that blacks are getting a bad break. But looking out for whites is mostly a good way to wind up on the SPLC’s list of hate groups, so nobody pays much attention.