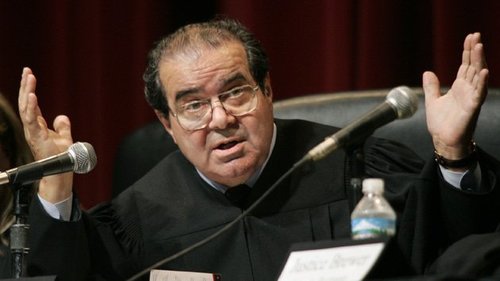 You don’t get a reaction of shock and disgust when you say something crazy, you get it when you say something pretty sensible that everybody has been supposed to ignore precisely because the rational arguments against your idea aren’t as strong as the emotions against it. Besides Trump’s call for a temporary moratorium on Muslim immigration, today there was Justice Scalia pointing out that black affirmative action beneficiaries might do better in slower paced colleges. From the NYT:

WASHINGTON — An affirmative action plan at the University of Texas seemed to be in trouble at the Supreme Court on Wednesday. By the end of an unusually long and tense argument, a majority of the justices appeared unpersuaded that the plan was constitutional.

… In a remark that drew muted gasps in the courtroom, Justice Antonin Scalia said that minority students with inferior academic credentials may be better off at “a less advanced school, a slower-track school where they do well.”

“I don’t think it stands to reason that it’s a good thing for the University of Texas to admit as many blacks as possible,” he added.

The horror, the horror …

I’m not sure if Scalia’s question is totally true, but, obviously, it’s essential to discuss it to have an intelligent debate on affirmative action. And that’s precisely why it was so shocking that Scalia dared bring it up. Respectability in modern America is proportional to the number of plausible and important ideas you would never dream of mentioning, even if you are a Supreme Court justice or a Presidential candidate.