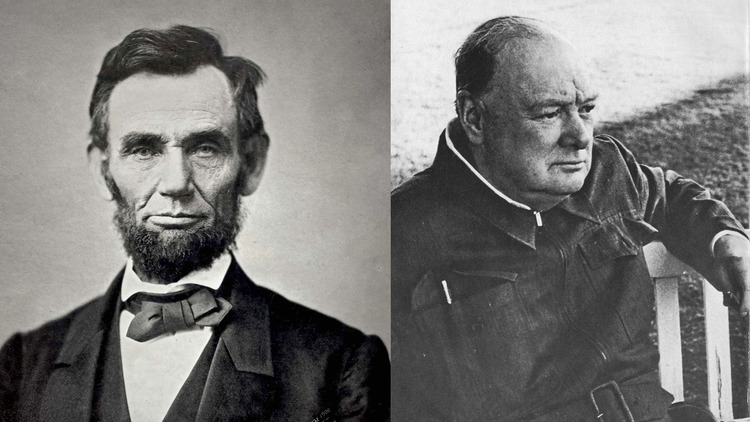 Why Obama prefers Lincoln to Churchill

Any act of a President has huge symbolic weight, and President Obama's banishment of the Epstein statue of Sir Winston Churchill—not just from his office but from the entire White House—as Brenda Walker has reported, deserves attention. As the underlying Daily Telegraph report pointed out

A British Embassy spokesman said: "The bust of Sir Winston Churchill by Sir Jacob Epstein was uniquely lent to a foreign head of state, President George W Bush, from the Government Art Collection in the wake of 9/11 as a signal of the strong transatlantic relationship." It was lent for the first term of office of President Bush. When the President was elected for his second and final term, the loan was extended until January 2009.

Barack Obama sends bust of Winston Churchill on its way back to Britain, By Tim Shipman, February 2009

The Telegraph offers as elucidation for this snub:

Churchill has less happy connotations for Mr Obama than those American politicians who celebrate his wartime leadership. It was during Churchill's second premiership that Britain suppressed Kenya's Mau Mau rebellion. Among Kenyans allegedly tortured by the colonial regime included one Hussein Onyango Obama, the President's grandfather.

1) The Mau Mau rising was almost totally a Kikuyu affair. Obama's grandfather, Onyango Obama, was a Luo. Tribalism is intense in Kenya ( In America's Half Blood Prince, Steve Sailer notes that being shut out by the ruling Kikuyu in post-independence Kenya is believed by Obama to the be reason his father declined into alcoholism and an early death: AHBP, P62). Part of the reason the British Army was able to so completely defeat the Mau Mau was the enthusiasm with which other Kenyan tribes joined with them to fight the Kikuyu.

Obama's paternal grandfather, Onyango Obama, was born a pagan in Africa in 1895.

This means he was in his later 50s during the period of the rising, 1952-60. Far too old for combat, and the wrong generation (to say nothing of tribe) to be associated with the Mau Mau leadership, who were typically men in their 30s.

3) Barack Obama makes no such claim in his autobiography. He does vaguely refer to his grandfather being imprisoned, which apparently occurred in 1949, long before the violence started.

The idea of his grandfather suffering for the Kenyan independence movement would have been elixir to Barack Obama, who went to Kenya in 1988 having been filled full of romantic lies about his African relatives by his scalawag mother. (AHBP P 34-7). Obama was crushingly disappointed in what he learned about his grandfather, who died in 1979. (He was crushingly disappointed in his father's memory too—Barack Obama Sr. had been killed in a drunken car crash in 1982.)

Onyango Obama...sampled Christianity, but found it too soft and womanish. Obama's stepgrandmother (his polygamous grandfather's third wife) explains: ...he could not understand such ideas as mercy towards your enemies, or that this man Jesus could wash away a man's sins. To your grandfather, this was foolish sentiment, something to comfort women. And so he converted to Islam—he thought its practices conformed more closely to his beliefs. [p. 407] Obama says in Dreams that he was proud that his late Kenyan grandfather had become a Muslim because it seemed evidence that he was anti-white.

When he first visits Kenya in 1988, however, Obama is dismayed to discover that his grandfather being black and Muslim didn't make him a Black Muslim. As Obama listens to his step-grandmother tell how the old man had served the British and admired their ways, he writes: ... I, too, had felt betrayed. ... There was no real basis for this image, I now realized—only the letter he had written to Gramps saying that he didn't want his one son marrying white... What Granny had told us scrambled that image completely, causing ugly words to flash across my mind. Uncle Tom. Collaborator. House n*****. [p. 406] (AHBP, P147)

So who was Obama's grandfather? Sailer relates:

In speeches, Obama often describes his father as if he were impoverished. In reality, his father's father, Onyango Obama, was, by local standards, an affluent, politically influential landowner... Obama was distressed to discover that Onyango had in reality worked for many years as a domestic servant to British colonialists, and that he had gotten rich by introducing white ways on his farms. ...Despite his admiration for English organizational skills, Onyango didn't subscribe to their monogamy. He acquired three wives...AHBP, Pp46-7

(The sudden appearance of Freedom Fighter Onyango Obama is easily explained. 87 year old "Granny" ( (actually no blood relation—another of Onyango's wives)—was following the hallowed African tradition of telling the White Man what the no doubt leftist journalists wanted to hear. Being a "domestic servant" hardly sounds glamorous, does it?)

So what do we make of Barack Obama? Quite simple—once you have read America's Half Blood Prince.

The reason why according to The Telegraph

a bust of Mr Lincoln now sits in the Oval Office where Epstein's Churchill once ruled the roost.

is that Obama detests founding-stock Americans (and, no doubt, their cousins). Lincoln's bust is in the Oval Office because he killed more of them than anybody else.

Now his handlers have camouflaged him and piloted him into the White House. We have to hope enjoying the fruits of office provides enough distraction.

Sailer's view is that it is the second Obama term which will be more dangerous. I am not so sure.

America's Half Blood Prince —essential reading for the Age of Obama.