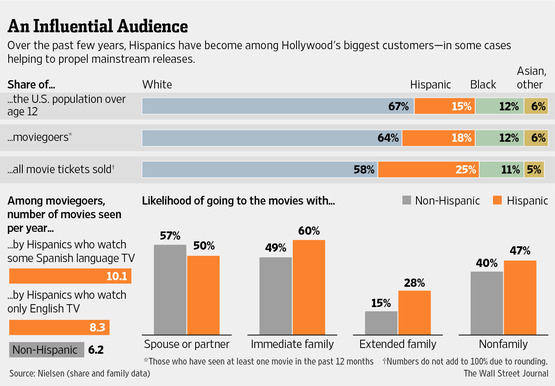 Why Is TV Cooler Than Movies These Days? Because Of The Mexicanization Of The American Audience. 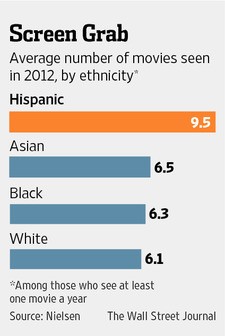 There are a lot of reasons for the decline in Cool Factor of movies relative to television, but this new Wall Street Journal article updates the numbers behind a big contributor that I identified in Taki's Magazine four years ago. From the WSJ: 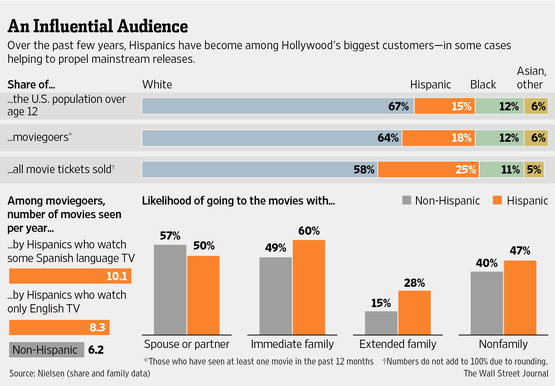 Hollywood Takes Spanish Lessons As Latinos Stream to the Movies

In the past few years, Hispanics have become some of Hollywood's best customers. Though 15% of Americans over the age of 12 are Latino, they accounted for 25% of all movie tickets sold in the U.S. in 2012, according to a Nielsen Co. study. The average Hispanic moviegoer went to nearly 10 films in the year, compared with just over six for whites, African-Americans, and Asian-Americans.

... The new industry focus comes at a critical time for the movie business, which is desperate for good news in the domestic market. Attendance at theaters has declined 10% in the past decade, according to industry data, while home entertainment spending is off more than 17% from its 2004 peak.

"The U.S. is a mature theatrical market," says John Fithian, chief executive of the National Association of Theatre Owners trade group. "But unlike any other, we have a growing population and the fastest-growing part of that population, Hispanics, also happen to be the most enthusiastic moviegoers. That's good news for the future of our business."

The impact upon the quality of films and the quantity of quality films influenced by the Mexicanization of the American audience is rather like the widely discussed effect of globalization: famously, explosions translate into any language, witty dialogue less so. But, as Hispanics become a massive pillar in the domestic audience, explosions play better here, too.

For example, the Academy Awards gave the latest Best Picture to Ben Affleck's "Argo" largely to encourage the production of more mid-budget flicks aimed at middle-aged, educated, white Americans (like the Academy voters). "Argo" was a fine movie, but it's hard to imagine it winning Best Picture in past eras when Hollywood made a similar quality movie for grown-ups about once a month rather than as a once a year exception that proves the rules.

Let me point out the peculiar aspect of white flight from increasingly Mexicanized things: it's seldom talked about as much as white flight from black things. The media is constantly full of discussions of whether or not whites are listening to enough black music or giving blacks enough Academy Awards. This kind of thing strikes white people as fun to argue over.

In contrast, white people's declining interest in all things Mexican or even Mexican-influenced is almost never mentioned. It's not a conspiracy of silence, however. It's a conspiracy of boredom.